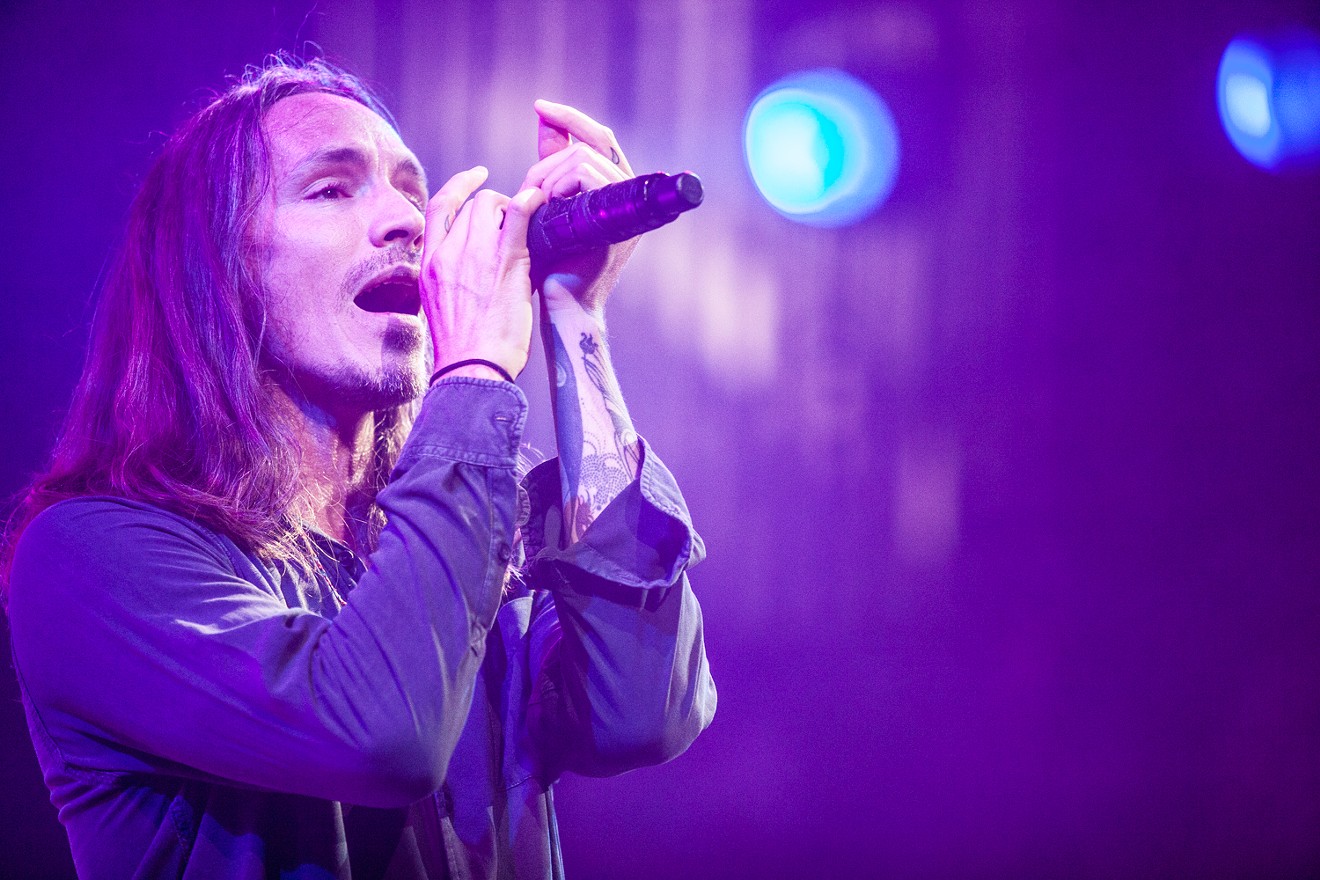 It was after the sixth beer-soaked cry of "Jim Adkins" that my worst fears were confirmed: The man sitting behind me was a Blurter.

You get them sometimes at shows. Blurters aren't quite hecklers — they lack the aggression and occasional wit of a decent heckler. They're a lazier version, content to blurt brief snippets of commentary or nonsense throughout the night. Blurters almost never communicate with complete sentences. They're so intoxicated they can barely start a thought, let alone finish one.

The man behind me was repetitive, dumb, and louder than a church bell: classic Blurter material. As hometown heroes Jimmy Eat World tore their way through a hits-heavy set, The Blurter offered his running commentary. "Yeah, this one!" he'd shout at certain songs, when he wasn't busy invoking Jim Adkins' name. He said the frontman's name so many times I was wondering if he was trying to Beetlejuice him somehow. Maybe if you say Jim Adkins' name 20 times out loud he'll poof offstage in a cloud of smoke and materialize directly in front of you and offer to join your next Rock Lottery band.

The band played with a projection screen behind them flashing red and blue lights. Surrounding them on the sides of the stage were lights that looked like street lampposts. Combined with the smoke drifting onstage, it gave Jimmy Eat World's set a London-by-gaslight vibe. I kept waiting for Jack the Ripper to emerge from the wings and gut the bassist as they played "Lucky Denver Mint."

At one point in the set, the band busted out an acoustic guitar for "Hear You Me (May The Angels Lead You In)." The crowd pulled out their cellphones to give the ballad the 21st-century "lighters up" treatment. The Blurter was not one of them: "Not my favorite!" he bellowed as the glow of iPhones and Androids filled up the dark arena.

Jimmy Eat World ended the set with a menage a trois of power-pop: "Praise Chorus," "The Middle," and "Sweetness." The Blurter shouted "Gives me chills!" in between slurps of beer as the band headed offstage. I could see where The Blurter was coming from. While their set wasn't the most visually dynamic thing to watch (the band isn't one for stage banter, windmill kicks, or mic stand humpin'), it was structured impeccably — packed with catchy songs, and paced so the energy in the pavilion didn't flag during their performance.

Led Zeppelin started pumping through the speakers as the crew worked to switch the stage over for Incubus. And not the thunderous, lascivious, swaggering version of Zeppelin, but the folky, Tolkien-loving version of Zep. The "serious" Zep. That felt like a bad sign. Sometimes you can augur how a concert will go based on whatever the pre-show music is. Case in point: Jimmy Eat World's set was preceded by Taylor Dayne's greatest hits. Any band willing to blast "Tell It To My Heart" at a throng of people sweating on a humid Saturday night is probably going to put on a fun show. Anyone trying to put you on some "Battle of Evermore" game is gonna bore the pants off of you.

It's not a foolproof theory, but it held true last night. Incubus were boring.

They weren't bad. On the contrary, they were a tight, professional, well-oiled machine. And I went into their set with an open mind. I was never a big fan, but I liked a lot of their stuff when they first started blowing up. They were a hard rock band for softies. They had a DJ like every other rap-rock adjacent group had, but weren't oozing machismo or aggression — they were like 311's gawkier, younger cousins. And they had some decent tunes. If "Stellar" or "Drive" started playing on the radio, I wouldn't twist the dial.

In the long run, the one thing that put me off about them is that they seemed like a group that took themselves too seriously. And when you're a band that's named after a sex demon, a little bit of levity seems called for.

There wasn't much levity on display tonight. They played their set with the poker-faced determination of a wedding band hellbent on giving the audience what they want. Their live setup didn't have many frills, aside from a circular screen/lighting rig behind them that looked like a Stargate. As a live band, they were even less theatrical than Jimmy Eat World (who at least had Adkins' enthusiastic demeanor to give them a lively air). They were just kinda ... there. The only interesting thing about them, in terms of stagecraft, was the way singer Brandon Boyd held his mic: at arm's length, away from his face. Like Hamlet holding up poor Yorick's skull, or someone holding the sides of their lover's face.

There were some musical high points: "Megalomaniac" and "Anna Molly" offered some welcome jolts of guitar crunch and adrenaline, while "Stellar" served as the perfect soundtrack for the dark sky and cold winds blowing through the pavilion. It was a moment when the band's proclivities for expansiveness and earnestness came together beautifully.

But then there were songs like "Wish You Were Here" and "Love Hurts," fatally hamstrung by their seriousness and the fact that they're songs that remind you of better songs. I couldn't imagine any human being choosing Incubus' saccharine "Love Hurts" when they could listen to the epic cheese of Nazareth's "Love Hurts" instead. Even worse, the lyrics to the Incubus tune also invoked "Love Stinks," a J. Geils joint that's more fun than the entire Incubus discography put together.

As for "Wish You Were Here," on record and live it's a solid song with driving guitar parts and a cosmic feel. But it shares a name with Pink Floyd's saddest song, a tender and weary farewell that makes most other songs look piss-weak in comparison. It doesn't help that the band actually played a snippet of the Floyd song right after their tune, reminding us of the classic song that we could have been listening to instead.

I should note, however, that I'm a minority opinion on this subject. The rest of the crowd seemed to be composed of rabid Incubus fans. They were going nuts for the group. I was mystified by their fervor. I know that Boyd's heartthrob status probably has something to do with it. When he stepped onstage with his flowing Jesus hair, dressed in an outfit that made him look like a yoga teacher who was going to sell some weed to his students after class, the women in the crowd definitely got more vocal.

But I can't attribute the crowd's reaction to Incubus solely on Boyd's sad-boy good looks. People genuinely seemed to be jazzed by their music. I tried listening with an open heart and open ears to see if I could pick up on whatever they were hearing, but I remained unmoved.

I wasn't the only one. The Blurter didn't say a single word during their entire set. 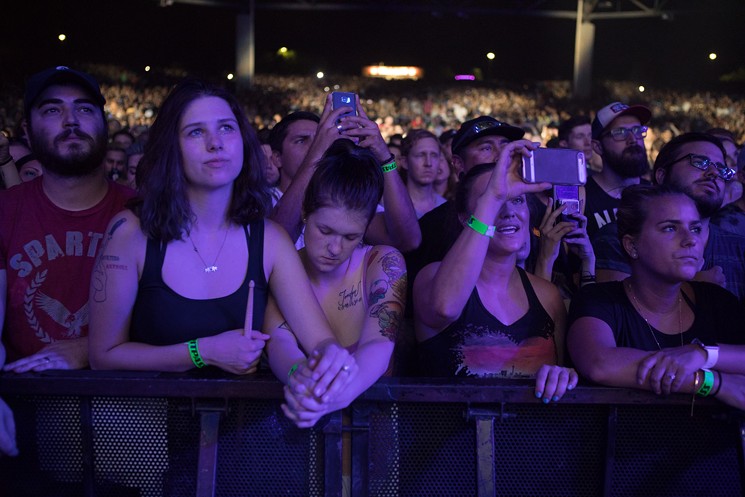 The Crowd: A surprising number of families. Lots of kids, which seemed odd. Were Incubus guests on Yo Gabba Gabba or something? Is Yo Gabba Gabba still on the air? Do kids today even still watch that shit? I have no idea. Like Jon Snow, I know nothing.

Overheard: "What's up, kids and drunks?" — Jim Adkins. The many kids and drunks in the audience let Jim know exactly what was up with them by hooting, hollering, and wooing Ric Flair style.

Random Notebook Dump: Incubus' DJ has the longest dreads I've ever seen in my life. Whipping them in the air, they looked like flailing ropes. If he was a Mortal Kombat character, he could shout "GET OVER HERE" and lasso people over to him with those things.