Lana Del Rey Made a Phoenix Arena Feel Like a Nightclub 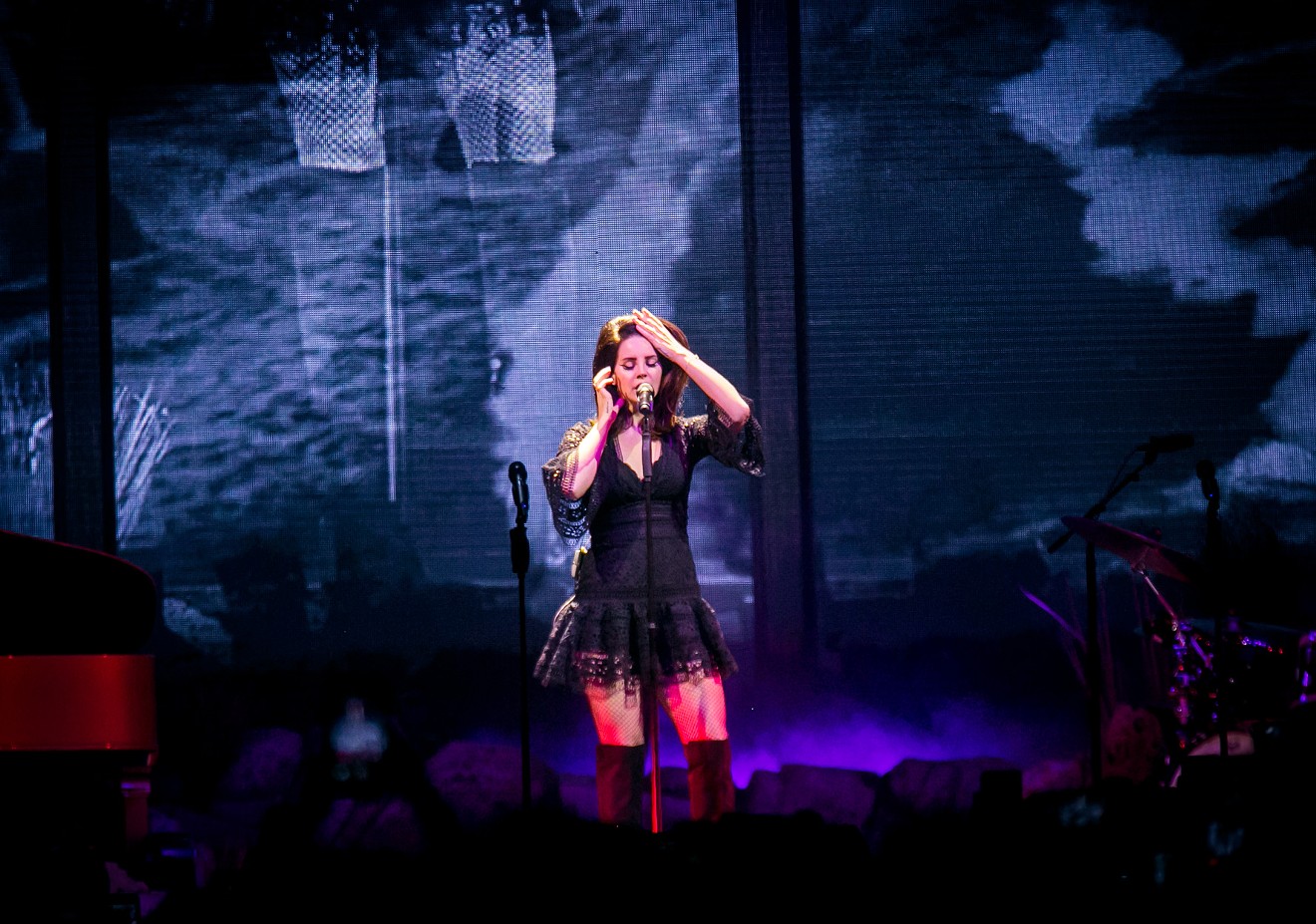 Lana Del Rey performed at Talking Stick Resort Arena on February 13. Melissa Fossum
Whenever I hear a Lana Del Rey song, I think of Karen Hill from Goodfellas. I think of the scene where her future husband Henry hands her a bloody gun, moments after using it to pound a man's face in, and her wistful voice-over admits that it turned her on. It’s the electric charge that powers so many of her songs. It doesn’t matter if she’s swinging the gun or hiding it for someone else. Sometimes being an accomplice can be just as fun.

As I waited for the lights to go down, I wondered what Del Rey’s live show would be like. On record, she’s such a composed and stage-managed figure. Her five studio albums have served as one long fainting couch, giving her plenty of room to stretch out and get comfortable with her numb gangster’s moll persona. A glamorous torch singer who always breaks bad, she seems to belong to a different era. You could picture her singing songs with Lee Hazlewood in 1967. It's tougher to imagine that kind of character playing an arena rock show in 2018.

Even her stage setup looked beamed in from the past. Covered in fake rocks, palm trees, and pool chairs, the Talking Stick Resort Arena stage looked like an old exotica album cover brought to life. A projection screen overhead played a loop of waves crashing onto a sandy beach. All it was missing were some Tikis and hula dancers.

Though the venue wasn’t sold out, there was a large crowd assembled at Talking Stick. In particular, fans were swarming the standing-room-only ground floor and pressing up as close to the stage as possible. There was a certain nervous energy in the air: the hum of fans ready to boil over.

And when the lights went down and Del Rey came out, fans all around me shrieked like tea kettles.
She walked on to James Bond orchestral music with the familiar Bond gun barrel bouncing from side to side on screen. It was the perfect walk-on, as Lana Del Rey’s whole being seems to be the answer to the question, “What if Laura Palmer were a Bond Girl?”

Dressed in black and flanked by two backup dancers, Del Rey opened with “13 Beaches.” Her voice filled the room as she prowled from one side of the stage to the other. The crowd near the stage jostled and churned to get closer to her. At one point, it looked like a mosh pit for cameraphones.

Some musicians like Jack White have talked about banning cellphones at their shows, but it’s impossible to imagine a Del Rey show without them. They’re part of the experience, the aesthetic. Everyone in the front row had a phone trained on the artist for most of the night. The pale light they cast looked like an extra row of stage lights. From a distance, it also made her look even more like an old-school Hollywood vamp. And the selfie-eager crowd were her paparazzi. Every starlet needs an adoring mob. 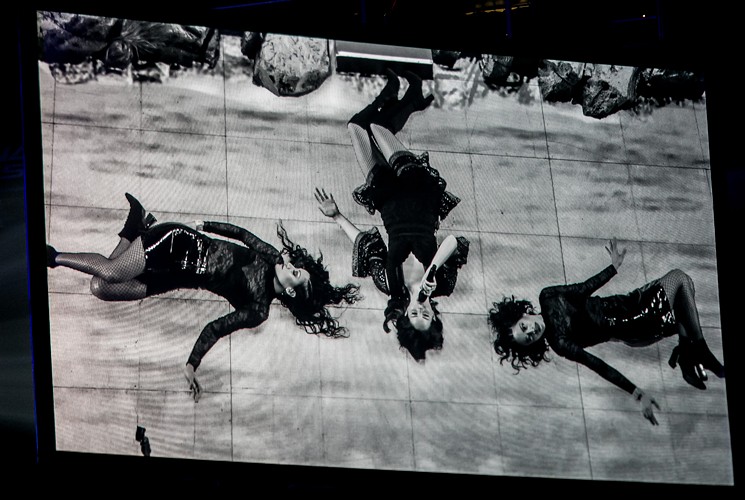 The underwater sequence at Del Rey's Phoenix show.
Melissa Fossum
For “Pretty When You Cry,” Del Rey and her dancers laid on the floor. She sang as they sinuously waved their arms overhead. With the ocean projection playing underneath them, they looked like they were underwater. It was a neat bit of staging: I had never been to an arena show where the headliner did a whole song lying flat on their back.

It wouldn’t be the last time that Del Rey bucked concert conventions that night.

After ending “Cherry” with a brief quotation of “Scarborough Fair,” the rest of her band left the singer alone onstage. She strapped on a white Flying V and said she was going to play “Yayo.” Then she dropped character.

Del Rey started talking about the story behind “Yayo,” how it was dedicated to a friend from Jersey who got a huge snake tattoo on his back. Del Rey wasn’t being the cool, collected pop star she was when she stepped onstage. It was almost like she was going back in time and showing us what she must have been like playing open mics before she made it.

Talking about her friend and her song, she sounded kind of … bashful. It was an endearingly human moment, made all the more so when she confessed she lied about the snake tattoo. “It was actually a dragon, not a snake, but a snake sounded better,” she confided.

Magenta lights washed over the stage as the band came back on to play “Born To Die” and “White Mustang.” The crowd had already been yelling “WE LOVE YOU, LANA!” and screaming like they were at Shea Stadium, but they got especially loud for these songs. Even Del Rey seemed caught up in the moment. Going off on a melodic tangent at the end of “Mustang,” she sheepishly apologized to the audience: “Sorry, I was just feeling myself for a minute.”

As the night progressed, the Lana character faded more and more into the background. You could see the woman behind the construct in the way she would grin mischievously whenever she sang “fuck,” and in the way she would banter with the crowd between songs. It was like she was having so much fun performing that she couldn’t help but say “screw it” to maintaining the illusion of being some doomed romantic figure anymore.

Following spirited renditions of “National Anthem,” “Lust for Life,” and “Change,” a pair of swings descended from the ceiling. Her backup dancers swung in them while she sang “Ride,” but Lana got on a swing for “Video Games.” Six years after its release, that song hasn’t lost any of its power. It’s a stirring, rich ballad, made all the more affecting by the eerie electronic thumps that bubble under its surface like a metal heart beating in slow motion.

After doing “Summertime Sadness” and “Ultraviolence,” the lights dimmed and a loop started playing. This was clearly the encore break. Most musicians take that moment to dip offstage, but Del Rey stepped down in front of the crowd and spent almost 10 minutes signing records and taking photos with fans.

Lana Del Rey left us gobsmacked.
Melissa Fossum
I finally understood why her fans were so devoted to her. It’s not just that she is an impressive performer and songwriter. It’s because she’s the kind of pop goddess who’s willing to float off her pedestal. come down to Earth, and pose with them, shake hands, and accept gifts. And gifts she got: bouquets, gift bags, pink boxes, handwritten notes.

I couldn’t imagine a Taylor Swift or Beyonce doing that. And even if they did, they wouldn’t have done it for so long. Del Rey walked across the entire front of the stage, signing as much as she could. While her band stood in the dark onstage, she communed with her fans. Considering that Del Rey recently has had run-ins with stalkers, it shows a tremendous amount of trust on her part to get that close and personal with so many strangers.

When the encore started, she asked the crowd for suggestions. At first I didn’t think she was serious. I had seen bands pull the old “we’re asking for a request but we already know what we’re going to play” schtick before. But it was legit. They actually tried to play a couple of songs and had to stop because the band didn’t know how to play some of her older numbers.

Between this and the 10 minutes of fan mingling, I was gobsmacked. I had never seen an arena show that was this loose before, that pivoted from being a well-oiled machine to a shoot-from-the-hip adventure. It was like the arena had shrunk down to the size of a nightclub, and Del Rey and her band were vamping like this was their first big gig ever. It was wonderful.

Lana Del Rey, femme fatale and sultry siren, was gone. In her place was Lana the goofball, the people-pleaser, the improviser. But the old Lana wasn’t gone for long. She ended her show with “Off to the Races.” Purring “My old man is a bad man,” she snapped back into character faster than a drag racer flying off of Dead Man’s Curve. She sounded like she was back on that same high that Karen Hill was when she held her man’s gun.

The Crowd: More sparkly than a Twilight vampire army. Girls wearing army jackets with lieutenant stripes covered in glitter, boys wearing purple sequin caps, kids scampering around with bedazzled cat ears: it was a shiny crowd. And while the audience demos skewed heavily towards young girls, there was a decent amount of older folks in the crowd. A songbird whose M.O. is “Nancy Sinatra on ludes” will always have cross-generational appeal.

Overheard: “God, she’s so hyper-diaper!” A gaggle of teenage girls walked behind me as I headed to my car after the show and I heard one of them say this. It took every ounce of my willpower to resist the urge to whip around and shout “HYPER-DIAPER?! WHAT DOES THAT EVEN MEAN?” because I already felt old enough as it is.

Random Notebook Dump: Chekhov’s gun principle manifested itself as Chekhov’s double bass. The bass stood onstage throughout the night, unmanned. Having watched wrestler Braun Strowman smash a standup bass over Elias Samson’s head yesterday on WWE Raw, I kept expecting somebody to get clobbered with it by the end of the night. Thankfully it was just there to be played during “Video Games.”