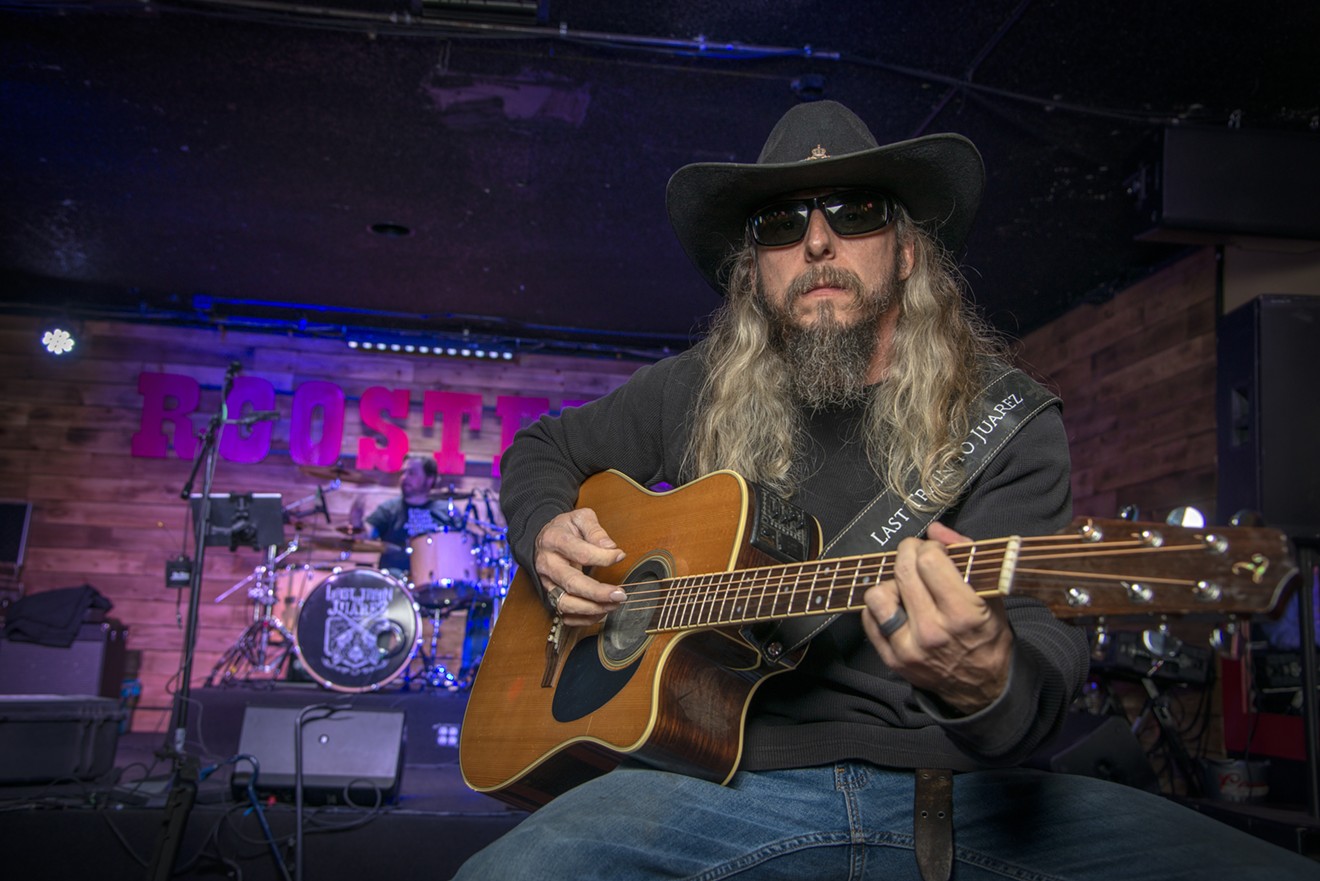 Dejan Knezevic of Last Train To Juarez, with drummer Brian Teille in the background, performs at Roosters Country in Mesa. Dennis Murphy

Some Road, the new album by local country outfit Last Train to Juarez, features 10 tracks of what some may call “outlaw” country. But singer and guitarist Dejan Knezevic doesn’t exactly feel comfortable with that moniker.

“Our music blurs the lines a bit and doesn’t fit neatly into any specific country genre. I have heard people refer to us as ‘outlaw, red dirt, biker country, and rock or metal country.’ Ultimately, what is most important to me as an artist is to write and create music that is pure, honest, and authentic — music that comes from the heart and soul,” says Knezevic.

Last Train to Juarez will celebrate the release of their first LP (which was recorded at Villain Recording with Knezevic’s Pelvic Meatloaf bandmate, Byron Filson, twiddling the knobs) by playing a release party this Friday, March 18, at Roosters Country in Mesa.

The band is really the brainchild of singer/guitar player Dejan Knezevic (also of local metal stalwarts Pelvic Meatloaf) who started the group in 2018. In four short years, Knezevic and his bandmates have begun to carve out a strong local following and aim to start spreading their wings on a regional level as well.

There is a deeply personal nature to Knezevic’s songs that will appeal to Some Road listeners and live audiences alike. A song like “This Letter,” for example, tells the story of an event from Knezevic’s own life that will resonate with anyone who has gone through a troubling addiction or had to watch a loved one do so. It is clear that Knezevic is comfortable with baring his soul for his art.

“I woke up one day and there was a letter next to me. That song is that letter paraphrased. So those words in the song are actually [Knezevic’s wife's] words to me in that letter. So that's why I kind of struggled with whether I should release it, but I did with her blessing. She said, ‘Go ahead and do it. Because, you know, some people may relate to it.’ And you know, it’s an inspirational song at the end of the day because it ends with, ‘I know I will make a change,'’’ says Knezevic.

“I spent some time in Bosnia, and I came across some graffiti in a town called Mossad. Mossad was a heavily segregated town during the war in the '90s, where the primary fighting occurred between the Muslims and the Croatians in that town. But I came across some graffiti under a bridge. It was really beautiful — a huge rose bleeding. The rose petals were bleeding blood, and above it, it said ‘The war is not over.’ Now, that was kind of an omen of what's to come. I don’t think the war is over in Bosnia. They kind of just pushed the pause button and that is what inspired the song,” says Knezevic.

Last Train To Juarez has had something of a revolving door of musicians during its early years, but Knezevic feels like the current lineup is finally one he can fully build around. Drummer Brian Teille is also a veteran of the hard rock scene in town and has become Knezevic’s right-hand man when it comes to getting the band loaded up and ready for shows. Pedal steel guitarist Mark Tomeo, bassist Jonathan Candler, and lead guitarist Stephen Dietrich round out the lineup. Both Tomeo and Dietrich are in their 70s and Candler is blind, so the heavy lifting associated with being part of a working country band falls squarely on Teille and Knezevic.

“So, it's Dejan and I, typically, and we lug all the gear in and get everything set up. Then afterward, we tear it all down, put away the PA and all the cables. It's a production every time we play, but it's worth it. We enjoy it. We have fun doing it and neither one of us really, have any issues with hauling the gear other than our knees and our backs (laughs),” Teille says.

Last Train to Juarez CD Release Party. 8 p.m. Friday, March 18, Roosters Country, 3731 East Main Street, Mesa. There is no cover charge to get in and CDs will be available.
KEEP PHOENIX NEW TIMES FREE... Since we started Phoenix New Times, it has been defined as the free, independent voice of Phoenix, and we'd like to keep it that way. With local media under siege, it's more important than ever for us to rally support behind funding our local journalism. You can help by participating in our "I Support" program, allowing us to keep offering readers access to our incisive coverage of local news, food and culture with no paywalls.
Make a one-time donation today for as little as $1.