After her 2013 debut Pure Heroine, the New Zealand native helmed the soundtrack for the Hunger Games: Mockingjay Part 1 soundtrack. Now, she's taken on that role again, assembling an eclectic group of performers to join her on the Melodrama World Tour.

There's teen sensation Khalid, singer-songwriter Mitski, pop star Tove Styrke, and rap duo Run The Jewels. They don’t have a lot in common, apart from the fact that Lorde recruited them for various shows on her 69-stop world tour.

But Styrke and Run the Jewels joined Lorde at Glendale's Gila River Arena on Friday, March 16, and it all made sense.

First up was Styrke, in a bright orange, sleekly modern jacket with matching, equally loud boots. Her band was minimal — two darkly dressed figures in the sideline alternated between electronics and live guitar and bass tracks.

She opened with “Borderline,” a single from her second album, Kiddo. Her voice, like Lorde’s, has a relaxed, slightly strange characteristic. In the middle of the set, she covered Lorde’s “Liability,” stylizing the track with her upbeat, kitchen-sink brand of electro-pop.

Styrke danced with confidence and swagger, turning out natural moves that also looked like she was grooving for an audience of one.

RTJ gave each other props throughout the show.
Jim Louvau
Ten minutes after wrapped, Run The Jewels strutted out.

“We’re Run The Jewels and we came to fuck Arizona the fuck up,” Killer Mike said before the two jumped into the song “Run the Jewels.” The intersection between Lorde and RTJ fans was expectedly small.

However, Killer Mike and El-P’s contradictory combination of impassioned bravado and sweet paternal nature brought folks on board. They spoke a lot between songs, tying the night together with an air of friendliness and care, bridging the gap between the night's genres.

With pair of golden hands — one making a fist and the other a finger gun, RTJ's most famous iconography — suspended far above the stage, the pair focused on songs from their latest album, with high-octane takes on “Legend Has It” and “Call .”

At 9 p.m., the lights shut off and everyone stood up for Lorde.

Melodrama single “Sober” started up as interpretive dancers walked around the stage, only their silhouettes visible in low blue lights. Lorde sang hidden until the second verse. Then she was revealed, wearing stylish black-and-white athleisure wear with straightened hair. Alone, she went to the forefront stage, set with flashing red lights, during “Homemade Dynamite.”

Lorde, in her excitement, occasionally opted to shout lyrics rather than sing them. 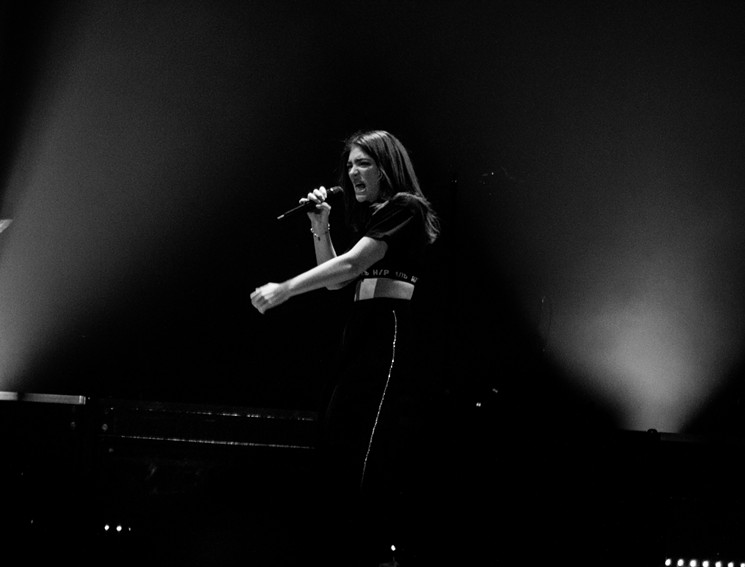 The Melodrama Tour made a stop in Glendale on Friday at Gila River Arena.
Jim Louvau
Throughout the night, the dancers' movements seemingly represented different sides of Lorde. Sometimes they moved frantically, showing her struggles. Sometimes they moved beautifully, reflecting her confidence and strength.

During “Tennis Courts,” a modern dancer took the elevated stage behind her, wearing white in contrast to Lorde's dark clothes. She stretched and danced, as Lorde delivered her own confident, unique moves below her.

Projections of teens passing around a bottle of liquor, then a joint, played on split screens as Lorde sang her Disclosure collab “Magnets," a sexy, somewhat self-destructive song.

At times, Lorde interacted with the dancers. But more often, there were two stories being told on the stage.

“Friday night, huh?” she said while introducing “Ribs.” “This is a song about a Friday night.”  As the song played out, Lorde entered a glass box and changed into a pink floor-length gown with frilly shoulders.
Then, she turned up the theatrics.

In “The Louvre," Lorde led a growing ensemble of dancers through a ripple of arm motions, akin to Solange’s recent performances. The dancers lifted her in the air as she vocalized over the end of the track with clarity.

During “Hard Feelings,” the glass box rose above the stage as a soloist imitated Lorde’s choreographed movements across the stage. The box tilted precariously as Lorde began her Mockingjay track “Yellow Flicker Beat.” At first, the dancer acted lost before swinging on ropes in the suspended box. The dance in the box turned into struggle as Lorde’s own face appeared on the projection behind her, a narrative bookmark reminding the audience that they're watching her story. Before long, the box returned to the ground, where it came from.

Lorde didn't appear until the first song had almost ended.
Jim Louvau
“It feels like you know me,” she said. She’s right. Her music comes from a place of intimacy that was reflected throughout the night.

Lorde then slowed things down, with a series of ballads beginning with “Writer in the Dark.” She was on the stage alone, elevating her Lorde’s crisp vocals.

“Do people enjoy Frank Ocean?” she asked while introducing a cover of “Solo” from his latest album, Blonde. Covering Ocean is a daunting task for any singer, but it’s worth stressing that Lorde was having an incredible night vocally. She nailed the cover.

Lorde transitioned straight into “Liability,” a perfect companion to Ocean's song. Then, the lights went down and she started “Sober II (Melodrama)” — her album’s centerpiece, a narrative pick-me-up with trap beats.

Moments later, Lorde returned to the stage wearing an even frillier red two-piece outfit. She serenaded a male dancer with “Supercut” for a bit, before a more energized Lorde ran across the stage, yelling the chorus with a little bit of grit in her voice.

After about an hour, she got to “Royals,” which featured stripped staging; just Lorde singing at her mic stand while that empty box ascended behind her. Like the song, the solo staging was reminiscent of a young Lorde, one without the production budget she has in 2018.

Right after, she jumped into “Perfect Places."

“I’m 19 and I’m on fire,” she sang; appropriate considering the screaming audience and her metallic scarlet get-up.

Lorde thanked Glendale, as the lights came up and she began the final track of her main set. Rope-ladders dropped from the suspended box as she started “Green Light.” At the chorus, the dancers begin climbed up and into the box. It swayed as they took solos.

Lorde hadn't been to the Valley since her debut record.
Jim Louvau
Below, Lorde provoked the audience in an “emotional call-to-arms,” asking for them to sing along. As she finished the lead single off of Melodrama, the box ascended until it was out of view.

Shortly after "Green Light" concluded, Lorde returned to the stage alone. She began "Loveless," controlling the production on a Midi pad. After, she performed an unreleased song called "Precious Metals." The track, a clear B-side from Melodrama, sounded great . A musical sister to "Homemade Dynamite," it makes sense that it was cut from the album, as it wouldn't add much to the tight track listing.

Finally, there was "Team." It was a full circle for Lorde, singing about a now-unfamiliar life, a life before she was selling out arenas. As the track played, Lorde hopped into the crowd and danced among her fans before she ventured off the stage, already on her way to her next beautifully conceived show.

The Crowd: Lorde fans. This was my first time seeing Lorde, but I've seen Run The Jewels before. This was by far the least receptive audience to their music, but the agnostics seemed converted by the end of the set.

Overheard: One very drunk woman telling disinterested younger fans that she's only familiar with Lorde because of the South Park episode.

Notebook Dump: How did the dancers get down after "Green Light?"