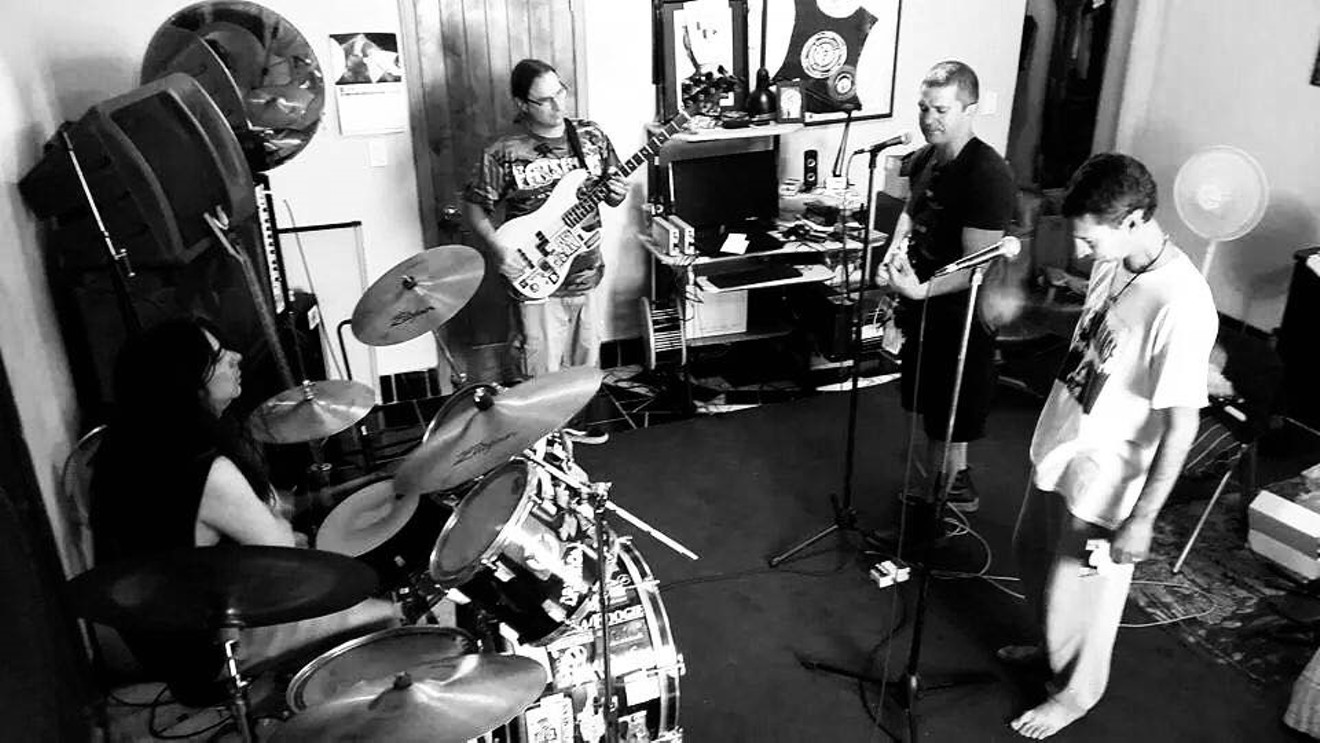 Rick Klu
Punk rock fans in metro Phoenix have probably heard of Malignus Youth. But there’s a good chance they’ve never had a chance to see the band play live — nor own one of the group’s releases, which is a shame.

The legendary Sierra Vista band made up of James Martin (guitar, vocals), Octavio Olaje (vocals), Tom Shelden (bass/vocals), and Mike Armenta (drums/vocals) got started in 1987 when the members were all teenagers.

Over the first few years of the band’s career, they were able to cement a place in Arizona music lore with one of the more original sounds in punk. Because of the band’s distinct sound and message, it’s safe to say that Malignus Youth fans are a rabidly devoted bunch who typically feel a deep connection with the band.

The importance of this relationship is not lost on Martin.

“As a musician, what you really want to do is connect with your audience,” Martin says. “It’s like making love, because you are right there and glued to the moment. It’s electrifying.”

With tightly intricate vocal harmonies, thought-provoking lyrics, and complex, yet melodic riffs, Malignus Youth’s positive approach to punk rock was (and still is) unlike that of any other band out there. The best description of their sound might be: a dash of Descendents, a pinch of Bad Religion (when they were still interesting, pre-Suffer era), and a punch (remember Al Pacino’s cooking how-to in Donnie Brasco?) of Rudimentary Peni.

Now you’ve got an idea of what they sound like — though Malignus Youth are more interesting than each of those bands.
During the band’s career, they have put out their own material (two EPs, one LP, and two compilation CDs) and remained fiercely DIY in the process.

They certainly had some “good stuff” going on then, but the band’s appeal hasn’t lost its lustre. Filmmaker Rick Klu has been working on Family: The Story of Malignus Youth since 2014. And though the band had its most active phase from 1987 to 1994, Malignus Youth have reunited on multiple occasions since then, including a few shows in southern Arizona. In 2014, after a 14-year break from playing live, they headlined a sold-out show at Tucson’s Rialto Theater and played 2016’s Southwest Terror Fest.

“The reason Malignus Youth is so awesome is because James Martin is so good at what he does."

With members now in their 40s, the band will play two shows for old and new fans alike. One’s scheduled for January 26 in Bisbee for those who would like to make the trek down south. And on January 27, they are scheduled to take over the Yucca Tap Room in Tempe with Dephinger, Phoenix Hooker Cops, Declaimed, and Mooseknuckle Sandwich.

“I think this is the first time we’ve played Phoenix in 23 years,” says Martin, who now lives in Washington, D.C.
Bassist Shelden lives in Phoenix and plays in Phoenix Hooker Cops, as well as the Fatskins. He has a theory about what makes Malignus Youth so great.

“The reason Malignus Youth is so awesome is because James Martin is so good at what he does,” he says. “It is pretty much his sound. I’ve always done my best to keep up with his playing. [Martin] wrote almost all the songs, and that’s why there is nothing else that sounds like it.”

Fans of the “Martin” sound will be excited to learn that the band has about 13 new songs they plan to record in 2018. They’ll play at least a few of them on Saturday night.

“We want to keep the ball rolling, as much as we can with jobs, and kids, and being grown-ups,” Shelden says.
“We’re going to try and do a couple of things each year.”