Why Meliza Jackson Loves to Push the Barriers of Sound Meliza on stage with decker. at Crescent Ballroom. Ray Squared Photography
In Pound For The Sound, we get technical with local musicians about what gear they use to create their signature style.

Meliza Jackson of decker. is the real deal when it comes to raw, unbridled guitar playing.

She has a calm, quiet demeanor about her offstage, but when she steps out to play, she unleashes straight guitar fury that adds so much to her band's sound and stage presence. Her technical abilities and use of effects, combined with a desire to constantly push the sound barrier, add a uniqueness to her playing style that keeps things dynamic and interesting.

Born in the Philippines, Jackson moved to Verde Valley, Arizona, at a very young age. She spent most of her formative teenage years in northern Arizona, and that's where she first picked up the ax at age 10. She messed around with the drums and piano, but guitar was her real love.

In fact, she taught herself to play by ear, listening and playing along to her parents' music, including Buddy Holly, Creedence Clearwater Revival, and a plethora of Motown. She was certainly exposed to a diverse palette at an early age.

When she graduated high school, Jackson decided it was time to pack her bags and head down the hill. The guitarist moved to Phoenix in late 2004 and hasn't looked back since. It's a decision that has suited her well.

Prior to playing with decker., Meliza was playing guitar with Phoenix's Rose Colored Eyes. In fact, right before going full-time with decker., she had finished recording five songs with her friend Kim Capria for a project now known as the The Banter. And most recently, she and the band just wrapped up a recording of their new single "Matchstick Man" at Flying Blanket with producer Bob Hoag. The track is due out later this year.

decker. is performing on Friday, June 9, at Last Exit Live. New Times talked with Meliza via phone and email about the show and a bunch of other stuff.

New Times: What's the secret weapon of your sound? And how did that help you find your "signature" tone?
Meliza Jackson: I’d have to say my '72 Fender Deluxe Telecaster paired with either the Vox AC30 or my newest amp, the Fender Bassbreaker 18/30. Both amps really give me such a wide range of tone, and I can create any type of sound I need. The Vox is just a beast. I got the Alnico Blue speakers in mine, and I love everything about the sound of that amp! And the Bassbreaker has the best of both worlds. One channel is modeled after a mid-'60s Blackface, and is such a nice clean tone. The other has a killer dirty crunch. It also works really well with all kinds of pedals.

What's your favorite piece of gear in your collection and why?
I think it would be a toss up from the Tele, and my SRV Signature Strat. The first guitar I ever owned was a Stratocaster, and I just love the way they feel and sound. For a player with smaller hands like myself, it was an easy guitar to really dig into and learn with. I’ve just stuck with Fender ever since. Having played many different Strats over the years, I fell in love with the SRV model the first time I played one. It is a tone master, and plays like a dream. Again, it has larger frets, which is a feature I love. The sustain holds great. And those three Texas Special pickups are hotter than the average, and cut through a mix extremely well. To this day, I think it is still one of the best sounding guitars I’ve ever played, and am happy it’s part of my collection.

Any special pieces of gear acquired over the years? Any special story, or stories, behind your collection of tools?
My parents were a huge support in my early age, and helped me get some decent gear to start my musical career. I lost my dad to cancer when I was 16 years old and I still have the first guitar he got me, so that one holds pretty sentimental value. That Strat is what I learned to play on, and is something I will keep forever.

Also on loan from a friend is an original '54 Les Paul. You just don’t come across guitars like those every day, and I’m fortunate to have it in my rotation of gear. 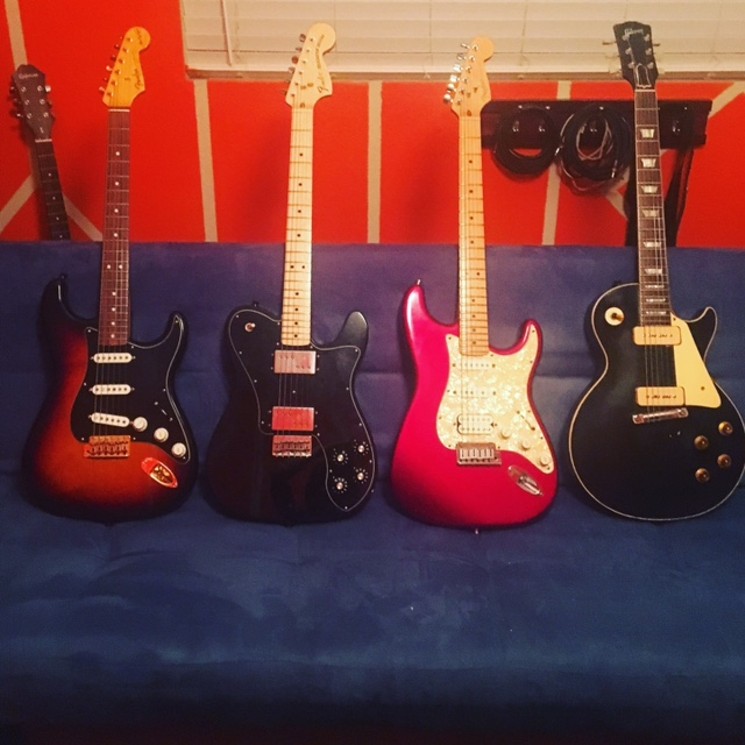 Meliza's guitar collection.
Meliza Jackson
In February 2016, you recorded a slamming instrumental track called “Drop The Hammer” with the Rock Bottom Bros. I love how all over the place your work is and the sounds that you create. Can you please describe your process and what you used on this track to create those monstrous soundscapes and chunky riffs?
The big sound on this track comes from the Les Paul, and the Memory Man pedal. This was the first song I really started to experiment with some sounds on that pedal. I wanted to create something different, and something fun. Paul and Mike reached out to me a few weeks before the session saying they wanted to collaborate on a Rock Bottom Bros episode. They had already put the song together, and basically said just do whatever you want with the guitar parts. It turned out to be quite the rocker. I did everything on the spot, and just let the creativity flow. I think we played it two or three times and then just hit record on the cameras the next run-through. We definitely captured a high-energy performance. It was a blast!


Over the phone you said that you grew up listening to your parents music and taught yourself how to play guitar. How did those sounds help mold you into the player you are today?
I think just being exposed to such a wide variety of music really sparked my interest at a young age. My mom was really big into Motown and the disco era, and my dad always had records on of Creedence Clearwater Revival, Buddy Holly, Waylon Jennings, Johnny Cash, etc. I think I was around 10 or 11 years old when my parents bought me my first electric guitar. I would come home from school and just play for hours. I taught myself to play along to a lot of the CCR, Buddy Holly, and old blues songs my dad always had on. Shortly after, I discovered The Rolling Stones and Led Zeppelin.

Jimmy Page and Keith Richards had a huge impact on me, and by playing that style of music I knew that this was something I wanted to do forever. I think the bluesy rock and roll guitar has definitely stuck with me to this day, and has been the sound that’s shaped my playing.

You also shared with me that decker. just recorded a new single, “Matchstick Man,” with Bob Hoag at Flying Blanket that is being released this Friday at Last Exit Live. What was your experience recording this track and what did you use to record?
The new single is my first experience recording with decker., and also my first time getting to record at Flying Blanket with Bob Hoag. Just to sit back and watch Bob work his magic is pretty neat on its own, but the whole experience was great! I went in early that day to hang out and watch the band track the song. Later that evening, we overdubbed all of my guitar parts. Bob really has quite the collection of killer vintage gear, so it was hard to pick what to play. I ended up using a Fender Jazzmaster. We ran it through a Bassman, with a Electro Harmonix Screaming Tree pedal, and an Echoplex. The guitars ended up sounding huge!

Any other words you want to share about the show Friday?
The show at Last Exit will be a showcase and kickoff of ... Mescal Porch Collective. In addition to decker., you can catch The Sink or Swim, Foresteater, Mr. Mudd & Mr. Gold, and The Lonesome Wilderness. There’s a lot of exciting things in the works for everyone, and I think it’s going to be a very special night!