More of the Monkees Goes Ape With 79 Bonus Cuts 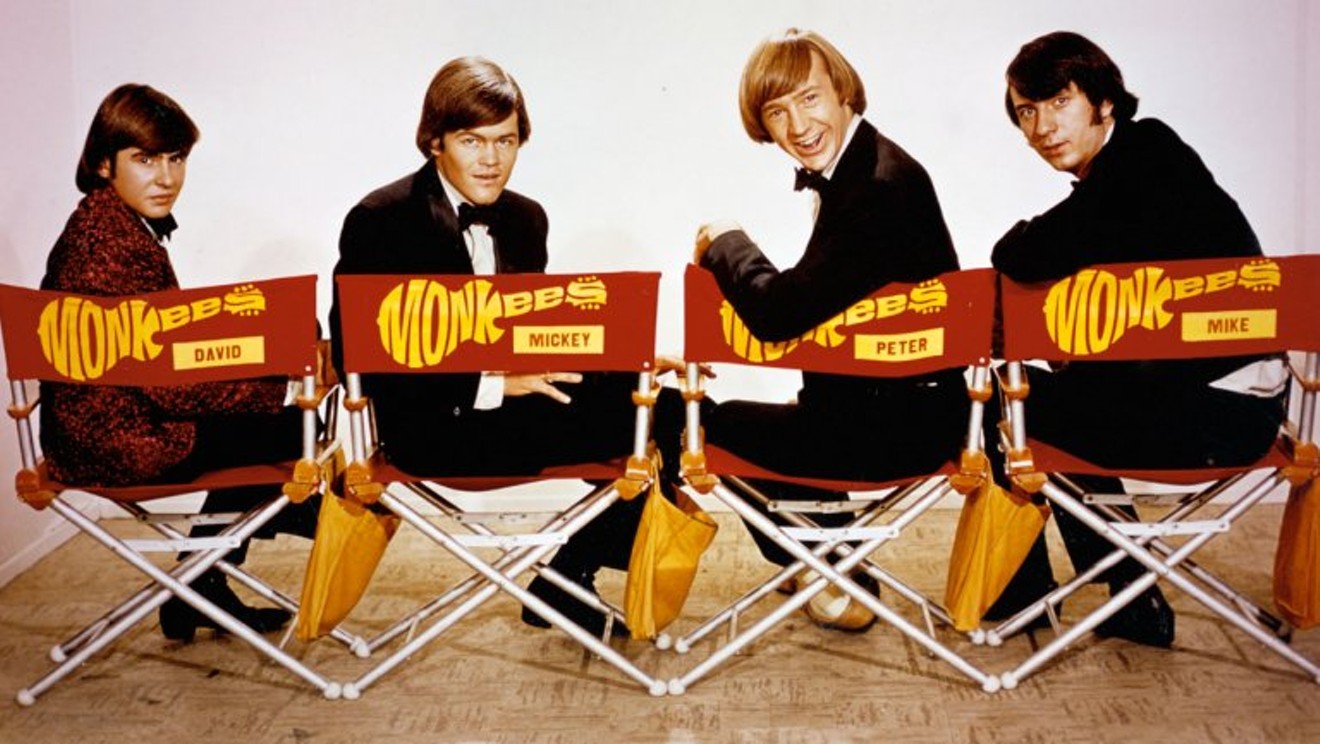 The Monkees, from left, were Davy Jones, Micky Dolenz, Peter Tork, and Michael Nesmith.
Photofest
A couple of months ago, the nice folks at Rhino Records issued an expanded edition of More of the Monkees, the 1967 sophomore release by America’s most popular prefab rock band. Rhino has twice before offered CD reissues of the original 12-track album, first released in January 1967, in 1994 and 2006, both with the usual handful of bonus track rarities and studio outtakes. This time, though, the label — dare I say it? — went ape. In its latest reissue, More of the Monkees has added a whopping 79 additional tracks.

It’s an extreme example of an ongoing trend, one that’s likely in place to offset revenue loss created by digital downloads that allow us to select songs we like from an album, rather than buy the whole damn thing.

But the expanded-reissue craze has gone from sublime — an updated version of an old disc might sometimes include a new remastering, or the single mix of a hit from the original LP — to ridiculous. There’s certainly an argument for Capitol Records’ 104-track, four-disc 50th anniversary edition of the Beach Boys’ historic, game-changing Pet Sounds album of 1966. But More of the Monkees? The disc, a collection of tunes recorded for the band’s prime-time TV show, was certainly a blockbuster in 1967, topping Billboard’s album chart for 18 straight weeks, and becoming the best-selling album of the year. But its clever pop songs (including the magnificent earworms “I’m a Believer” and “[I’m Not Your] Stepping Stone”) were hardly groundbreaking. Furthermore, the album’s music was performed not by the Monkees, but by session musicians. (Upon its release, Monkee Mike Nesmith called the record “the worst album ever recorded.”)

Yet this new Monkees reissue treats the LP as a musical landmark, offering a whopping 91 tracks on three discs. And while it’s impressive that a full 55 of these from-the-vaults goodies are previously unreleased, many are alternate versions, backing tracks, or mono mixes of a stereo track that appears elsewhere on the disc. This neatly produced treasure trove is a groove for diehard fans, but monotony (not to mention a waste of money) to anyone who just wants to hear “Mary Mary” and “Your Auntie Grizelda” from time to time.

Those guys aren’t the audience for this type of reissue, of course. These super-deluxe packages, the kind that aggrandize studio chatter, or ask us to buy a song we already own because this version is three seconds longer at the fade, are created for completists who already have the album — on vinyl, cassette, 8-track, and three different import CDs.

I know a guy named Dave who’s a Kinks fanatic. Because his fave band broke up more than 20 years ago, he relies on these bloated repackagings to bring him “new” material from Ray Davies and the blokes. “Plus it’s awesome to hear the creative process at work,” Dave explained, “which I got to when RCA reissued Everybody’s in Show Biz with all these awesome outtakes, and rejected session stuff.”

Awesome, Dave. But for those of us who don’t care about owning the alternate version of “Child Bride” (the one with Andy Pyle playing bass), all this extra stuff is so much expensive excess. And since these hyper-expanded reissues often replace the existing catalog version of the original disc, casual listeners must either buy the giant box-set edition of an album, or head to the secondary market to hunt up a used copy. (Which means no royalties for the artist, if you’re someone who cares about such things.)

“Part of me salivates at the thought of so much bonus material,” my friend Scott, a Monkees fan who fronted the punk band Koo Koo Boy, wrote when I told him about the More of… reissue. “But I also know I’ll burn out before I even get through it all.”

Scott is amused by the whole “mono and stereo mix” thing. “Just give me one or the other,” he says. “I first played these Monkees songs on a plastic mono turntable, so I’m not going to miss stereo if it’s not there.”
I’m more bugged by the outtakes and also-ran versions of tunes that got polished for final release. There’s a reason why “Don’t Listen to Linda” was dumped from More of the Monkees, which becomes apparent after a single listen. Hearing this cutting-room-floor junk makes me a little squirmy, and my friend Mike agrees.

“It feels like looking into a part of the creative process that the artists meant to keep to themselves,” says Mike, who’s a writer. “Authors don't put out expanded editions of their novels with deleted scenes and first drafts, and notes from the editor telling them to lose the bit where the dragon suddenly shows up.”

Mike thinks art should be left alone, so we can experience it the way it was intended to be. He and I have had long talks about Fleetwood Mac’s Rumors album, that groundbreaking pop hit machine of 1977, and we always end up lamenting that Stevie Nicks’ “Silver Springs” was dumped from the LP in favor of “I Don’t Want to Know.” But when Warner Bros. Records grafted “Silver Springs” onto the end of its 2004 Rumors reissue, we were both appalled.

“Instead of ending with ‘Gold Dust Woman,’ we now have this other song closing the record,” Mike reminded me the other day. “It's not the same experience.”

My record-store buddy Jim likes when the Monkees release rarities as part of their reissues, which Jim tells me is an ongoing series by the band. “I like all the B-sides and different arrangements,” he confessed. “But I like it better when they put all this extra stuff on a separate CD, so I can enjoy the album the way it was intended.”

I suppose that’s my real complaint about these bigger-and-presumably-better expanded releases. The addition of new material changes the original album in a way that’s unfair to the artist and the producer. Back before one had the option of buying only selected cuts from an album, record producers — sometimes in collaboration with the recording artist — sequenced the songs on an album with an eye (or an ear) on increasing our listening pleasure. There was a reason why each song followed the one before it. The thought that went into winding up Rumors with a song about the very things that eventually demolished Fleetwood Mac — excess and infidelity — got jimmied when the reissue producer plopped an outtake onto the end of one of the best pop albums ever.

I don’t want Pet Sounds to end with the mono single mix of “Sloop John B,” followed by 17 minutes of choir rehearsals, and Mike Love coughing. That album is supposed to end with “Caroline, No.” Maybe let’s leave art alone, already.
KEEP PHOENIX NEW TIMES FREE... Since we started Phoenix New Times, it has been defined as the free, independent voice of Phoenix, and we'd like to keep it that way. With local media under siege, it's more important than ever for us to rally support behind funding our local journalism. You can help by participating in our "I Support" program, allowing us to keep offering readers access to our incisive coverage of local news, food and culture with no paywalls.
Make a one-time donation today for as little as $1.