Why Mouse Powell Keeps It Local 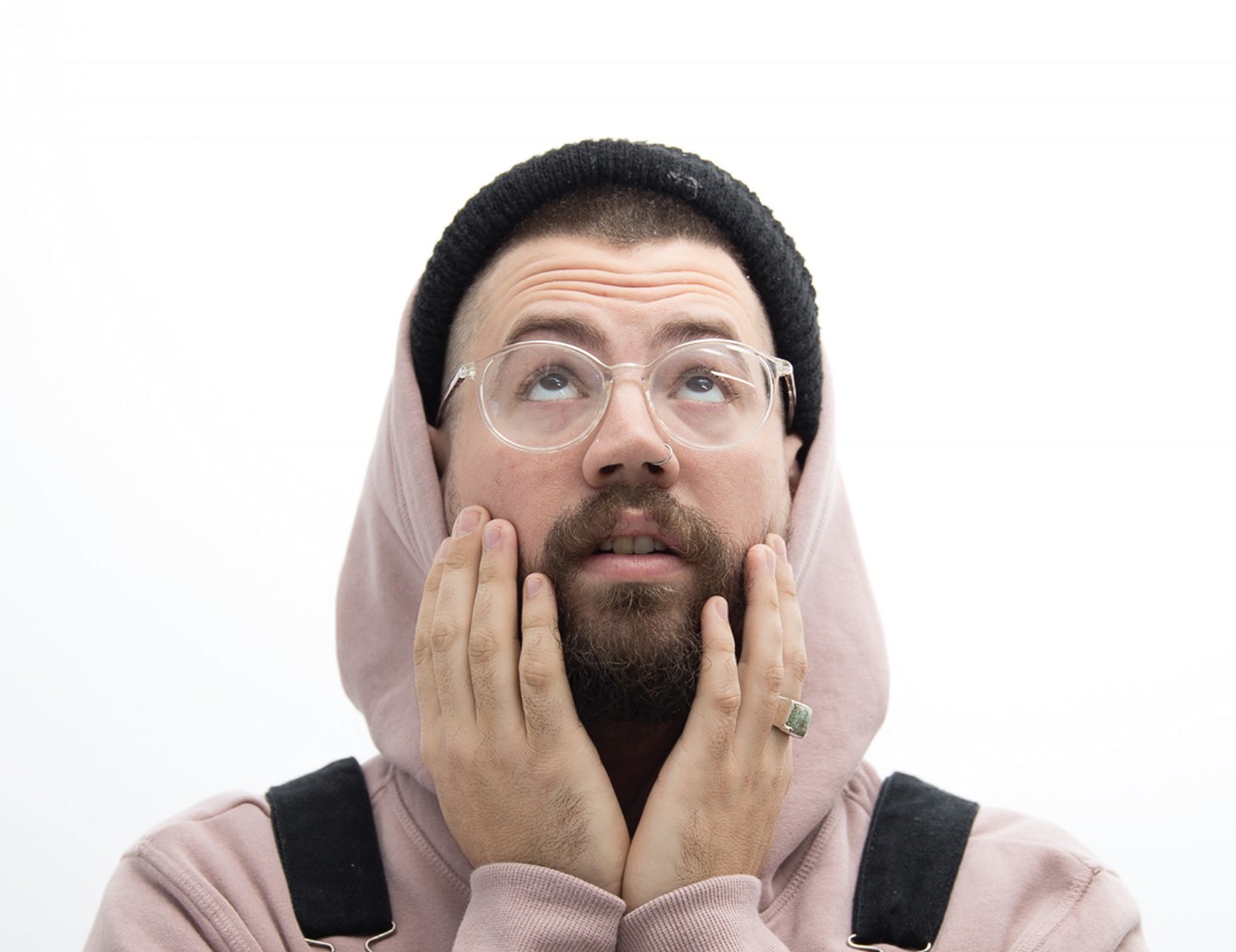 The Arizona rapper recently moved from Tempe to downtown Phoenix, a neighborhood still struggling to find its identity. Still, creativity can be found among the chaos and new condos. And much like the ever-changing city, Powell’s still finding out who he is, and documenting the journey on his latest album, First Love.

“I’ve been at the rap thing for a while,” the 27-year-old says. “I think with this album it has been all about growth. The songs are, for lack of a better word, adult. It is a reflection of who I am and I am getting older. My hair is turning gray.”

The record’s release will be celebrated with a party at Crescent Ballroom on Friday, January 19, with Bear Ghost, Hollowpoint Vigils, and The Sound Bombers.

Keeping it local is important to Powell, who hung out at west-side skateparks as a teenager. As some of his contemporaries pack up and drive down the shimmering asphalt of Interstate 10 to the bright lights of Los Angeles, he remains committed to making it in Phoenix. Some artists who have fled to California have said that the lack of a distinctive sound in Phoenix is more of a hindrance than an advantage. Others have cited strong divisions in the local music community.
Six years ago, Powell told Phoenix New Times that he saw the untapped potential of the music scene. And he stands by those words as others seek to find their fortune in California. Powell doesn’t deny the observations made by those who left when they thought the getting was good. But he thinks the lack of congestion for musicians in the Valley is something they can capitalize on.

“It is trying to break that strip-mall feel,” he says. “There is a Target and a Starbucks on every corner. As Phoenix grows outward or the west side goes inward, something is going to have to happen. When it happens, who the fuck knows?”

While waiting for the Valley to come together, Powell collaborated with some of the best-known musicians in town to create First Love. The samples Powell relied upon in his older work have been replaced with soul and jazz instrumentation, horns courtesy of Captain Squeegee’s Danny Torgersen, and production by Andrew “The Ref” Johnson. Members of The Sara Robinson Band and Katastro appear on the record along with the skilled saxophone of Torgersen’s bandmate Chris Hoskins. These artists, along with many other musicians whom Powell has worked with throughout the years, helped him move away from what he describes as the “16 bars and a hook” format.


“It is an internal battle to keep motivated on all fronts."

“It’s a cool process because, as a hip-hop guy, I nerd out when I can hear someone play a guitar solo,” he says. “I think that as a rock or jazz musician, they get really excited to play outside of their genre as well. That middle ground, at the risk of sounding corny, is where the magic happens. There is a lot of longevity in making something that is not restricted.”

Another advantage to living in Phoenix is being close to his family. Powell’s rap avatar is the nickname his sister gave him when they were kids; she liked to tease him about the “big ears and buck teeth” he had as a child. Powell’s mother appeared on his 2011 album Where It’s Cloudy, and his brother makes a cameo on First Love. Powell’s family likes what they have heard, but he hasn’t shared the entire record with them. He is afraid the confessional nature of his rhymes will cause unnecessary concern. 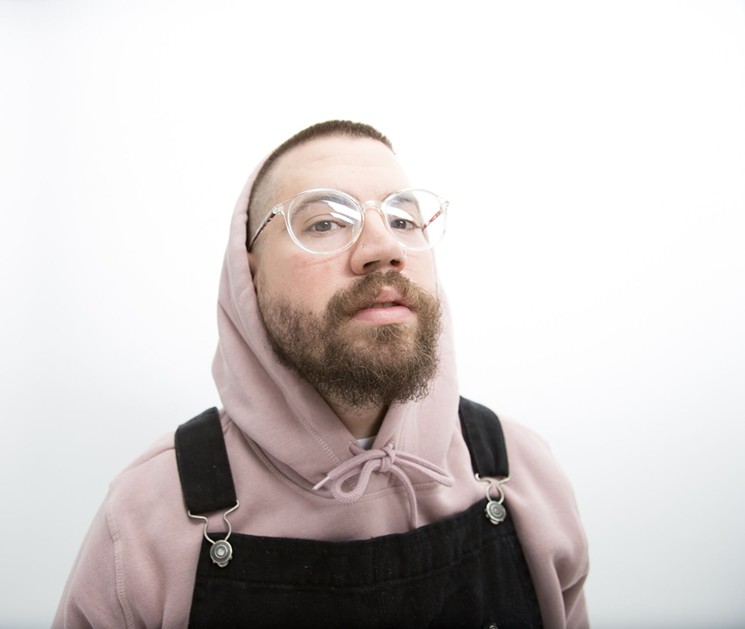 @ChrisFiq
“It can be a weird thing to play because it can be about them or certain aspects of my life that I don’t bring up at dinnertime,” he says. “I’ll wait for everything to be out and have them listen to it on their own.”

Powell wanted his work to take on a more earnest tone. Powell said that he had to take a good, hard look at his life and reassess what was important to him. On First Love, there is little evidence of the “ignorantly blissful” artist who talked about tattooed Latina girls at pool parties on his ode to Arizona “Holding Home” from Where It’s Cloudy.

Of course, any creative person who keeps creating is bound to improve at their craft, but the rapper made a conscious effort to capture his evolution from a young kid performing at house parties to someone who wants to say something more profound.

Powell talks about writing about what he calls “grown-up stuff” on the First Love track “You Don’t Want To Hold Me.” When asked to elaborate, he talks about seeing his friends graduating college and settling down with families. The self-described “old soul” longs for the security that a steady job can bring. But he can’t walk away from the bohemian lifestyle described in groundbreaking counterculture books like Jack Kerouac’s On The Road. Not yet, anyway.

“Part of me wants to buy a van and build bunks in it and live on the road nine months out of the year,” Powell says. “The other part of me is saying, ‘It would be sick to have a mortgage.’ The grass is greener all the time.”

The album’s title refers to both the artist’s enthusiasm for making music and a relationship where he was deeply in love for the first time. His voice is tinged with regret as he describes how close he came to settling down with this girl, but things don’t always work out. Powell has struggled to maintain a normal life despite his many months performing on the road. He’s searching for balance he may never find.

“It is an internal battle to keep motivated on all fronts,” he says.

With his 20s almost coming to an end, Powell’s goal is to live more comfortably as a working artist in his 30s and not worry about where his rent money is coming from. Despite some of the remorseful lyrics on First Love, Powell says there’s nothing he would take back on his creative journey.

Mouse Powell is scheduled to perform on Friday, January 19, at Crescent Ballroom. Tickets are $10 to $12 via crescentphx.com.