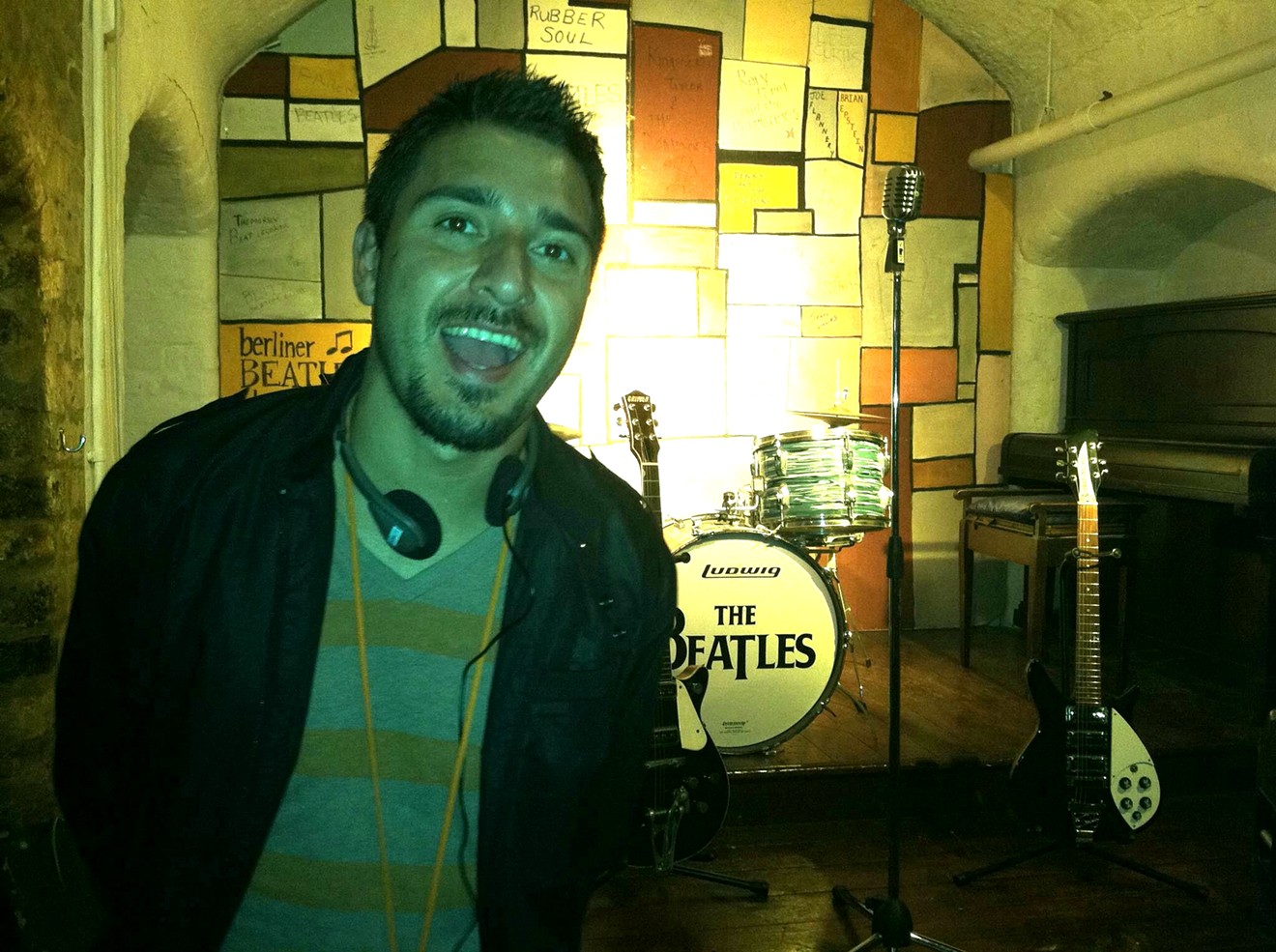 Nicolas Kizer is feeling motivated. Nichole Kizer
In Pound for the Sound, Phoenix New Times gets technical with musicians about what gear they use to create their signature style.

Nicolas Kizer of The Nix has had some life experiences that inspired him to reach new levels musically. A veteran in the Phoenix music community, he loves getting people together for the right causes. And lately, he has been feeling extremely motivated for new milestones in his life.

Kizer was born in Phoenix and attended Sunnyslope High School. He first picked up a guitar at age 12. As a teenager, he moved toward playing drums and bass. That love eventually shifted into the production world as well, making him a well-rounded musician.

He broke into the scene as the drummer for former Phoenix powerhouse Babaluca. Kizer has also played and recorded drums with Phoenix psych-rock band Terra Firma. And back in 2009, he was the mastermind behind When In AZ Volume 1, a compilation of Arizona bands covering other Arizona bands.

These days, Kizer is back at it again, releasing When In AZ. Volume 2 on April 6. This one has definitely expanded the project's horizons. There are more artists from outside of the Phoenix area, and artists took bigger chances with song selection. The last one featured 56 Arizona artists, while this one boasts exactly 100 Arizona-based acts and six and a half hours of music. It was "designed with the idea of it being a great road trip album," Kizer says.

New Times: What is the main reason behind putting together this compilation?
Nicolas Kizer: The original idea behind the When In AZ compilation came about from a conversation I was having with the late great local musician Mark Erickson from the band Colorstore. We were lamenting about all the local acts that start to get notoriety and move away to L.A. or New York in hopes of furthering their careers. We thought it would be a cool community builder to do a compilation of cover songs from local artists covering each other. It would kind of be like a snapshot of the local seen at the time, hence the name “When In AZ."

How did you go about working with bands for track submissions?
What I think is special about When In AZ Volume 1, and now Volume 2, is that we take all submissions. You get a cool variety of recordings from studio quality to home recordings on a four-track. The magic I think is how we set the playlist up and the art of mastering songs that were recorded in such different spaces. My goal was to make the compilation a great road trip album, where you could just put it on in the background and soak it up. Volume 2 happens to be six-and-a-half hours of music. Big thanks to Jalipaz Nelson from Audioconfusion recording studio in Mesa for mastering all 100 songs as a donation.

What do you hope to accomplish with When In AZ Volume 2?
I know that Volume 2 will create an energy and connection with the artists that participate on the project, similar to the first time around. The next step is to raise funds for our charity, Ryan House, during the eight shows around town in support of the release. The compilation will be free to download and the shows are free to attend. All that I ask if for everyone to please donate what they can.

On a side note, my son Theo passed away in 2014 under the loving care of Ryan House. It is a sanctuary facility for terminally ill children and their families in the heart of Phoenix. It has become one of my life’s missions to support Ryan House in any way possible, so that is how When In AZ ties in.

Theo, Niki and Nick Kizer at Ryan House
Lisa Lukas
What do you love most about hearing bands record other band's songs?
The best cover songs are the ones that don’t try to mimic the original. You get some pretty crazy versions of songs such as Treasure MammaL covering “Sweetness,” originally by Jimmy Eat World. I guarantee that this song has never been interpreted like this before. The other great thing is that you will be able to hear the cover songs performed live at the compilation release shows for possibly the only time, so don’t miss out.

Phoenix recently lost Devin Fleenor, formerly of Mr. Meeble and an upstanding community member. You happened to record a Mr. Meeble track called “Star Power,” for When In AZ. Volume 2. Beautiful work, a very touching rendition that hit home. With the loss of your son, and now Devin, what are your feelings about having this song recorded for the compilation? And what was your recording process for the song?
It really is a surreal thing that Niki and I just recently put this song together and our man Devin suddenly passes away. He was a really close friend of ours as well as his spouse Karina. We always loved his music and art. The detail he puts into it is very similar to how Niki and I work on post production and design. The only difference is that it always felt that Devin did it for artistic reasons and not commercial. He really was inspiring.

The way that our recording came together was pretty unique. I had the goal of doing the song as a hybrid remix and cover. I started with deconstructing elements of the original with my producer friend that goes under the moniker The Breadman Lives. We did things like change the tempo of the original and added new sections and electronic elements. From there we recorded Niki’s vocals, our guitar parts and some percussion at STEM Studio with Curtis Grippe. Then I worked with another local electronic producer named Lorne Mills to yet again chop up the song and add new elements. In essence the song is a double remix. I did final mixing at my home studio.

It has to be mentioned how beautiful Niki’s vocals turned out. It makes me tear up when you can hear Devin’s voice singing with Niki at the outro of the song. Haunting.

You are releasing When In AZ: Volume 2 this Saturday at Valley Bar. This is the first show of a string of shows promoting the release. Anything you wish to share with readers about what they can expect at the upcoming show(s)?
As I mentioned before the shows are free. All the bands are donating their songs and performances to the cause. I love them for that. You will hear different genres of music from around the state. I would encourage people to try and support all the bands that are playing even if it is not your typical style of music. In fact, I will be putting together a few physical box sets of the entire compilation that should find their way in the hands of anyone that makes it to all the shows. There will be some other cool When In AZ schwag sold for donation at the shows as well. Thank you to local venues Valley Bar, Crescent Ballroom, The Rebel Lounge, Stinkweeds, The Rhythm Room, First Studio, The Trunk Space, and The Rogue Bar for supporting us.

Visit wheninaz2.org for details on the release of When In AZ. Volume 2 and upcoming shows.