How Otto D'Agnolo Learned to Let Songs Write Themselves 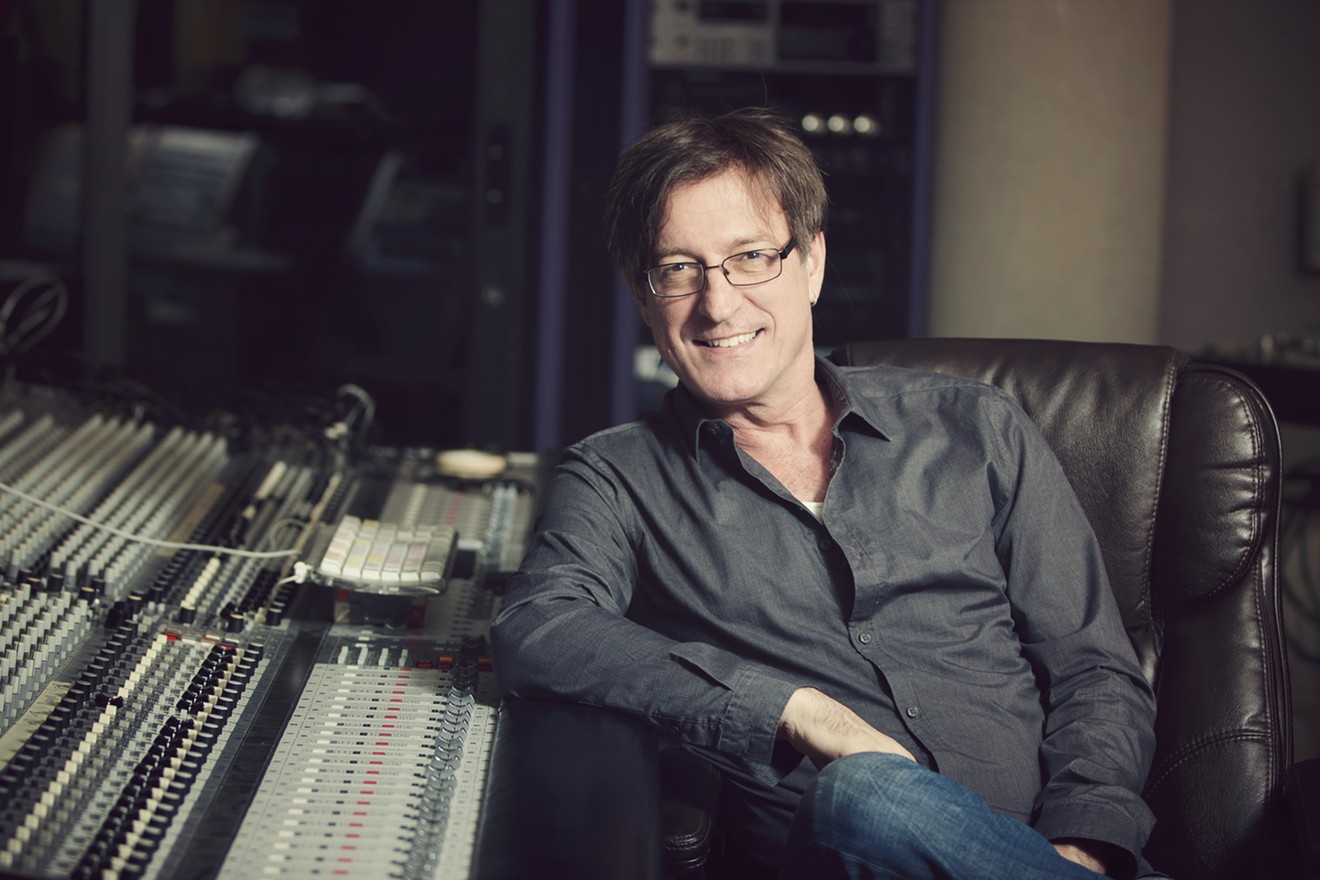 Otto in the producer's chair. Natalie Rockwell
In Pound For The Sound, Phoenix New Times gets technical with local musicians about what gear they use to create their signature style.

Otto D'Agnolo, best known in the local scene as "Otto D," has a rich history in both making and producing music. His career spans decades, and D'Agnolo has been involved in several facets of the industry. In other words, he's definitely not a one-trick pony.

D'Agnolo was born in Peoria, Illinois, and he loved music from an early age. When he was 7, he had a toy organ in the basement of his house, where he figured out one-finger melodies to popular music by ear. He moved on to trumpet in grade school, but that didn't stick entirely.

In fact, one day during "show and tell," he decided guitar was the way to go. Another classmate brought it in, and D'Agnolo was hooked. By the time he was 13, he had his first electric guitar and the first-ever band he played guitar in. According to D'Agnolo, they had quite an extensive catalog of "classic rock" hits.

Otto then moved to to Ohio to pursue a career in music production and as a sound engineer. He attended the Recording Workshop. After graduating, he spent his time teaching at the school. Craving more opportunities, he moved to Phoenix in 1989.

When getting his start in the Valley, D'Agnolo was working as a sound engineer and a session player, finding the work where he could. But it was limited at that time. Eventually in 2000, he bought Chaton Studios, where multiple projects, such as The Recording Artist, were created and produced. He even had DMX in his studio. When the studio closed in 2015, it was time once again for D'Agnolo to move on.
These days, he's working in film and plans to release his full-length feature, The Sweetheart Deal, later in 2018. D'Agnolo also has been doing a weekly Monday night radio show called The Music Industry with Otto D on Music Star Worldwide.

D'Agnolo, along with a band of all-stars, will perform his tunes on Friday, March 2, at Last Exit Live. New Times caught up with the multifaceted artist to talk about his inexpensive Telecaster, view of songwriting as an engineer, and upcoming show.

New Times: What's the secret weapon of your sound? And how did that help you find your "signature" tone?
Otto D'Agnolo: I love my inexpensive Fender Telecaster and my Fender HotRod Deluxe. Together, they are pretty unbeatable in terms of a tone that makes me really feel inspired to play and write.

What's your favorite piece of gear in your collection and why?
I guess the best way to measure that is “use,” and I’d say my Garrison six-string acoustic guitar is something I play all the time and at every show. It’s a jewel, sounds great, and plays wonderfully.

Any special pieces of gear acquired over the years? Any special story, or stories, behind your collection of tools?
Not really. Boring answer I suppose. I’ve haven’t ever purchased used instruments with a storied history predating my own use, so there’s no real stories to tell there.


Just listened to your track “I Just Don’t Care.” Great song, really enjoyed the upbeat vibe on the composition. How did you go about tracking your guitars for that? It sounds like there are multiple guitars being played and I'm wondering how that all came together in the studio?
On that song, I played all the guitars, which isn’t usually the case. The sound of the guitar track probably owes as much to my production background as it does to my inability to play anything too difficult. Not being stellar on guitar, I don’t try to tackle the whole song in a single guitar performance. I tend to break it into parts in my head before tracking. I also like things to be fairly chaotic and rough around the edges, which is easy to achieve when I’m playing the guitar, but can be difficult to capture with a great session musician. The recklessness and blurriness of this track really captures a lot of energy for me. And mixed with those drums by Todd Chuba and that violin by Suzanne Lansford, I just love it.

Over the years, you have been involved in several facets of the creative process. How do you feel your experiences as an engineer and producer intertwine into your work as a songwriter for your original compositions?
It helped and hindered at different times. There was a period when I quit writing and essentially quit playing for about 15 years. During that time, all I did was record and produce records for other artists. Initially, when I did pick my guitar back up and start to write, my production experience definitely got in the way. As soon as I would stumble onto a cool melody or lyric idea, my brain would race through all the production ideas and mixing ideas which threw the focus off the song and onto the record, a record that might never be made. I had to learn to put all of that out of my mind and just let the song write itself, because it will. After I made that adjustment, I could see how my production experience provided a safety net, meaning, no matter what I wrote, I knew I could make it sound cool in the end, and that removed the anxiety you can feel as a writer when wondering if the song you’re working on is really worth finishing.

Your band is performing on Friday, March 2, at Last Exit Live. Any words you wish to share with your fans about your upcoming performance?
I’ll be playing songs from my last two CDs, a few older songs that have gotten a little television exposure, and a few covers. My friend and speed painter, Randall Hedden, is opening the show. If you haven’t seen him do his thing, then you really want to catch his act at 8:30 p.m. My band goes on at 9:30, and it's packed with the best players in town. Since I’ve been a music producer in the Valley for over 25 years, I know most of the great players in town.

This band includes; Mel Brown on bass, A.D. Adams on drums, Thano Sahnas on guitar, Suzanne Lansford on violin, Rachael Gold on keys, and Shannon Wallace on harmony and backing vocals. It is an incredible group of extremely talented individuals, and this Friday, we add one more spark to top it off. Alaina Canida will be taking the stage for the first time in years. She will be joining us in the middle of the show for her solo on "Stormy Monday," and she’ll remain on stage for the rest of the show. It’s going to be a real treat for all of us in the room.