Paramore Took a Break from the Real World in Downtown Phoenix 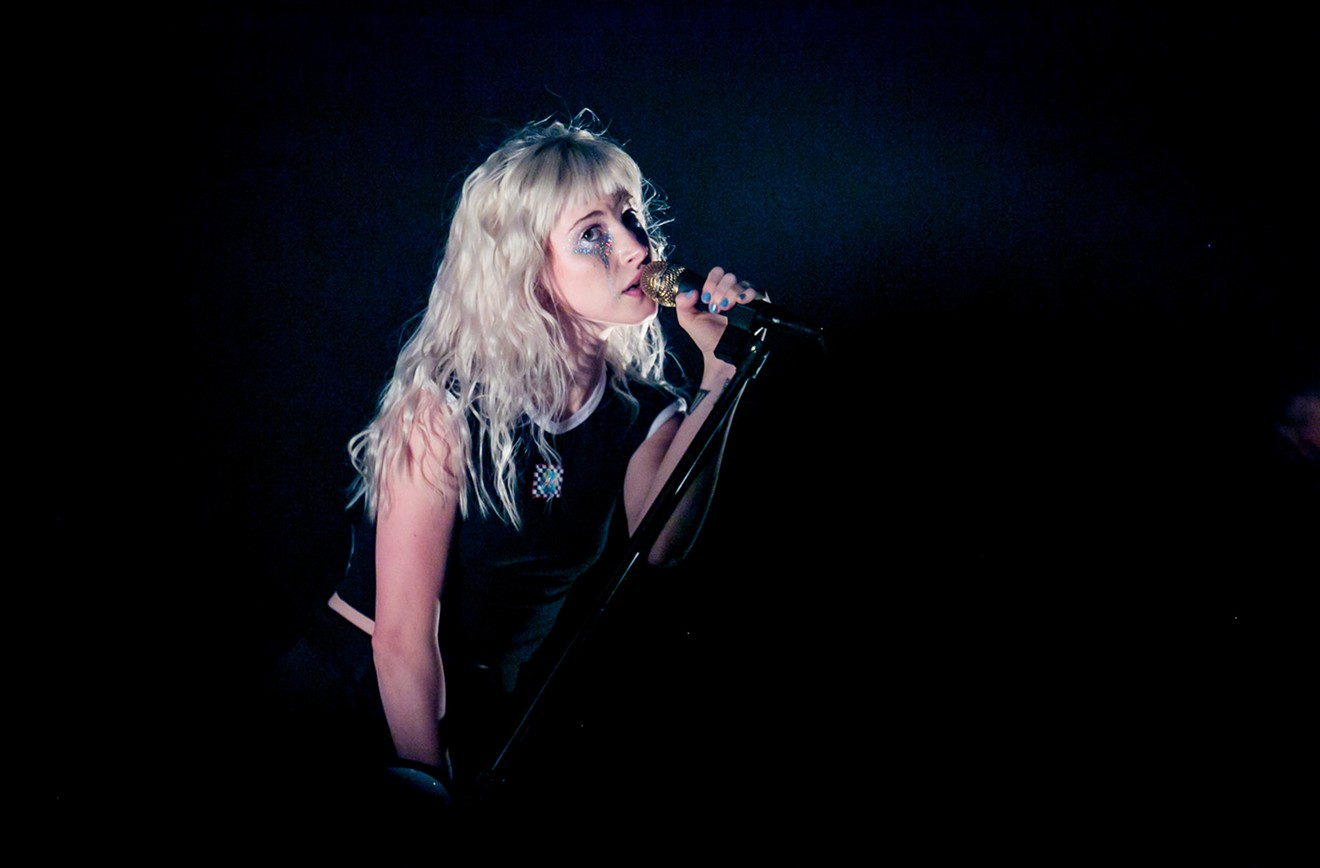 On "Hard Times," the lead single off her band's latest record, After Laughter, Williams sings about the search for rock bottom, a little rain cloud that follows her, and being unsure about how she even survives.

With that track, the band launched into a career-spanning set on Wednesday, September 27, at downtown Phoenix's Comerica Theatre.

In a black baby tee and dark, high-waisted slacks, Williams effectively ran laps for the opening song. Her platinum blonde hair flying and arms pumping, she kicked and danced her way up and down the stage, accidentally taking down a mic stand with her insistent fervor.

The discerning listener's mind races to find the culprit. Did her ex-bandmates break her heart? Has the voting public let her down? Is she singing about her mom, her dad — or is it her husband, fellow rocker Chad Gilbert from whom she's reportedly separated?

It could be all of them. Could be something else entirely.

But about that secret: Those specifics don't really matter. Because as Williams' soprano attacks and sparkles, there's a more straightforward take-away. Adulting is really hard.

People let you down. People don't get you. You soldier on. And it sucks.

Boiled down that way, those read like teenage hangups — like the band hasn't matured since their days on the Warped Tour circuit, still rotating through neon hair dye.

However, coming from a band that's arguably the most successful millennial rock group, the feelings captured on tracks like "Fake Happy" and "Hard Times" are especially current.

Call it the emo conundrum. You can graduate past the stylistic signifiers and into a veritable grown-up band with tastemaker-friendly sonic touchstones. You can be married, in your late 20s, and experience unquestionable success in your career.

That message clearly resonates with the band's fans, the most eager, loving, and ready to sing and clap along as any act could hope for.

Part of the reason it's so appealing is that Williams has learned these life lessons right alongside the band's fans. She has seen band members come and go — some not so quietly. Williams and her fans have grown up together, moving from messy high school drama to the high-stakes, unfriendly real world laid out on Paramore's Grammy-winning 2013 track "Ain't It Fun."

Paramore performs in Phoenix.
Melissa Fossum
"We've got a lot of lost time to make up for," Williams explained to the audience, a few rockers into the band's 19-song set. They wasted little time cranking through hits and deeper cuts from each Paramore record — save for the band's debut.

While a few tracks stick out as unmistakably dated to the early aughts, Paramore has exchanged much of their early stylings for updated arrangements that lean into the '80s influences prominent on After Laughter. Shades of Talking Heads, Blondie, and Modern English color the new tracks, and they're more pronounced than ever on older ones like "Daydreaming."

It works because at the heart of all the songs are those trademark angst-laden lyrics — and rhythms worth dancing to.

The band played as a seven-piece, with the core trio of Williams, longtime guitarist Taylor York, and drummer Zac Farro, a founding member of the band who acrimoniously quit (along with his brother, Josh) in 2010 and officially rejoined earlier this year.

About Farro: As a drummer, he's incredible to watch. But when he took to the front of the stage to perform a track from his side project, HalfNoise, his introductory banter betrayed that the band still might struggle with power dynamics. Before launching into a cover of his Britpop homage, "Scooby's in the Back," Farro referred to Paramore as "my band."

It was an odd turn of phrase, and something nobody in the audience could possibly agree with. Williams' energy and personality drives Paramore — if not always, then unquestionably when the band plays live.

Paramore performs in Phoenix.
Melissa Fossum
Regardless, no apparent drama ensued. The impeccably tight band simply turned back to what they do best: cranking out emotional rock songs.

While the set leaned heavily on material from the new record, which features Farro on drums, fans went wild for throwbacks to "That's What You Get" from 2007's Riot! and "Ignorance" from 2009's Brand New Eyes.

Toward the end of the show, Williams proposed a toast to the year 2007, the age of Sidekicks and the band's undeniable breakthrough hit, "Misery Business."

She brought two fans onstage to take over lead vocals on the track, and though the show lost a smidge of its unrelenting momentum, that moment made it clear what you get at a Paramore show: a dance party where you can shake, cry, laugh — and have a chance to snag the mic from one of the most magnetic rock stars of her generation.

It's a break from the real world. Ain't it fun?

Overheard: "No, that was the second time I saw Paramore."