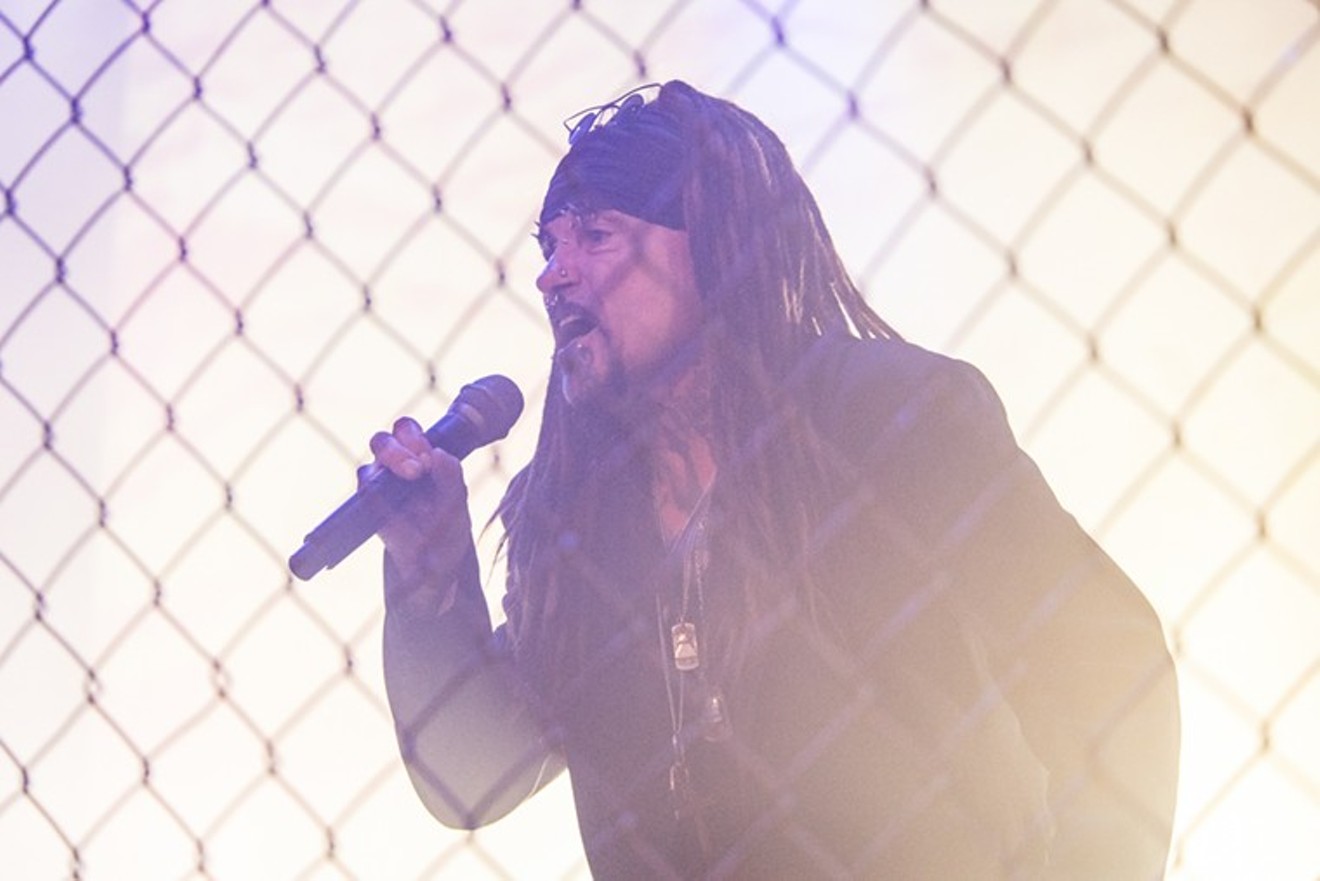 Ministry is scheduled to perform on Tuesday, April 12, at Marquee Theatre in Tempe. Jack Gorman
If you happen to be in the mood to see a show in metro Phoenix this week, you've got plenty of options. Old-school rivetheads, industrial metal fans, or anyone else who's rocked out to "Jesus Built My Hotrod" will be interested to know that Ministry will be performing their long-awaited (and twice rescheduled) show in the Valley on Tuesday.

Other notable concerts happening from Monday, April 11, to Thursday, April 14, include performances by singer/actress Poppy, electro alt-pop trio Cannons, goth-rock duo Twin Tribes, and post-hardcore act Drug Church. A few bands headed for Coachella (such as pop-punk outfit Beach Bunny and Aussie punkers The Chats) will also make a stop in the Valley over the next few nights.

Details about each of these shows and events can be found below. And for even more live music happening around the Valley, visit Phoenix New Times’ online concert listings.

Twin Tribes at The Underground

A goth-rock duo formed in Brownsville, Texas, in 2017, Twin Tribes' Luis Navarro and Joel Niño Jr., first started making an impression on the post-punk world in 2018 when their video for "Shadows" captivated audiences with its style and over-the-top occult imagery. In the few years that have passed, Twin Tribes have taken the world by storm, signing with Spain's Dead Wax Records and playing shows around the world. Using analog synthesizers and drum machines, Twin Tribes creates dark melodic songs for the undead. Joining Twin Tribes on Tuesday, April 12, at The Underground, 105 West Main Street in Mesa, will be darkwave duo Meldamor and Seattle-based death rock band Nox Novacula. Doors open at 6 p.m. and tickets are $13 in advance, $15 at the door. David Fletcher

Electro alt-pop trio Cannons is set to play a sold-out show at Valley Bar, 130 North Central Avenue, on Tuesday, April 12, in support of their new album, Fever Dream. Expect heavy synths, hypnotic melodies, and a surging dance floor when the band, helmed by lead singer Michelle Joy, guitarist Ryan Clapham, and drummer Paul Davis, hits the stage in support of their latest release. The 11-song album is the kind of career-propelling record that bands pine for, fans crave and cherish, and playlist curators salivate over. Cannons’ canon rests on a bedrock of soul-struck dance, guided by shimmering synths and simmering rhythm guitars, and American balladry, as if time traveling from a forgotten '50s diner jukebox to the band’s playground of chameleonic reference points. Fever Dream paints its sonic palette with cinematic ambition, scaling its magnetism to both festival stages and intimate settings, like the clubs and theaters the band is currently headlining. All this to say: You just can’t take your ears, or eyes, off of them. Chong the Nomad opens the 8 p.m. show. Tickets are available on the secondary market. John Amar

Ministry at The Van Buren

One of the pioneers of industrial metal in the late 1980s, Ministry came to life as a synthpop band in Chicago's underground music scene. Ministry's first album, With Sympathy, was praised by Rolling Stone for its catchy dance tracks. The album has since been disowned by bandleader Al Jourgensen, who felt pressured by his record label to match the then-popular sound of the new wave. Ministry's subsequent work would never again be so bright. By the time Ministry released The Land of Rape and Honey in 1988, the band's sound had become darker, heavier, and angrier, and it never went back. Last year, Ministry released their 15th studio album, Moral Hygiene, which showed that time has done little to dampen their harsh and combative sound. Speaking of harsh and combative sounds, Ministry will have opening support from Corrosion of Conformity and Melvins when they roll through the Van Buren, 401 West Van Buren Street, on Tuesday, April 12. Tickets for the 7 p.m. show are $39.50 in advance, $42 at the door. David Fletcher

Drug Church at The Rebel Lounge

New York-born punk/post-hardcore band Drug Church, which has been performing since 2011, is touring in support of its latest LP, Hygiene. The 10-track release, which is their fourth studio album and dropped last month, has earned plenty of acclaim from both fans and critics alike for its great lyrics and killer hooks. (Kerrang! called it “as addictively seductive as ever” and said listening to the album “might just be one of the most satisfying things you can do in less than half an hour.” See if you agree when Drug Church performs multiple songs from the album during their stop at The Rebel Lounge, 2303 East Indian School Road, on Tuesday, April 12. Doors are at 6:30 p.m. and One Step Closer, Soul Blind, and LURK share the bill. Tickets are $18. Benjamin Leatherman

Beach Bunny at The Nile Theatre

Pop-punk outfit Beach Bunny’s happy-actually-pretty-sad spirit is on full display on 2020’s Honeymoon, their first full-length album. The opening track “Promises” is meant for blaring with the car windows rolled down, windblown hair and all, screaming about an ex. Vocalist/guitarist Lili Trifilio’s vocals guide the production, set to lyrics less optimistic than Beach Bunny’s melodies suggest. At the top of the chorus, she sings: “Part of me still wants you.” A few bars later: “Part of me still hates you.” Despite covering lyrically gray areas, their songs are colorful and energetic that you might find yourself smiling at the melancholy, dancing through it all, and hollering along when Beach Bunny performs at the Nile Theater, 105 West Main Street in Mesa, on Wednesday, April 13. Songs from the 2021 EP Blame Game and their soon-to-be-released second studio album Emotional Creature are also likely to be featured. Wednesday and Ky Voss open the 8 p.m. concert. Tickets are $25. John Amar

In recent years, singer-songwriters in many cities can feel like they're a dime a dozen, but it doesn't feel like that's the sound that's coming from Los Angeles. You could've said that statement for a long time until 2017, when Phoebe Bridgers released her stunning debut album Stranger in the Alps. On it, the 27-year-old L.A. native gave us one of the prettiest and most thoughtful albums of the year while showcasing that she was a force to be reckoned with in the genre. When you listen to her music, there's an emotional heft to it all. Now, after critical acclaim from pretty much every journalist, she's still touring in support of her second studio album, 2020’s Punisher, and is due at Arizona Federal Theatre, 400 West Washington Street, on Wednesday, April 13. The concert is at 7:30 p.m. and tickets are $39.50 to $59.50. David Garrick

Hippo Campus at The Van Buren

Saint Paul, Minnesota, indie rockers Hippo Campus last graced Valley stages in 2019. Since then, the five-piece band has recorded an EP (2021’s Good Dog, Bad Dream) and its third full-length, LP3, which dropped a little more than a month ago. Last year, guitarist Nathan Stocker told our sister publication Westword that the band was "really diving inside and examining ourselves and our relationship to what we do" when recording the new album. Hear the results when Hippo Campus comes to The Van Buren, 401 West Van Buren Street, on Wednesday, April 13. The show starts at 8 p.m. and SoCal indie-soul group Ginger Root opens. The show is officially sold out, but you can hit up resellers for tickets. John Bear

The Los Angeles-based artist/actress Poppy built up her oddly cute “robotic” persona with a series of YouTube videos in 2014, eventually making her way into music. With a wide range of styles including bubblegum pop, reggae, and even “music to sleep to,” Poppy’s latest album, Flux, came out last year and offers more of an organic sound than her previous release, 2020’s I Disagree. She’s scheduled to perform at Marquee Theatre, 730 North Mill Avenue in Tempe, on Wednesday, April 13, with support from gender-bending musician Mz Neon. Doors are at 7 p.m. and tickets start at $27. Cameron Martinez

The Aussie punks of The Chats.
Luke Henery

The Chats at Crescent Ballroom

Australian punk band The Chats, most known for their music video and song “SMOKO,” are playing a weeknight show at Crescent Ballroom, 308 North Second Avenue, on Thursday, April 4. The trio – consisting of guitarist Josh Hardy, bassist/vocalist Eamon Sandwith, and drummer Matt Boggis – are currently touring the U.S. in support of their most recent album, High Risk Behaviour, but will head to Coachella later this month. This Aussie band of misfits are sure to put on a show. On the bill with them are Oregon-based punk act Mean Jeans and Brooklyn pop-punkers THICK. The show starts at 8 p.m. and tickets are $22.50 to $32.50. Jacob Vaughn
KEEP PHOENIX NEW TIMES FREE... Since we started Phoenix New Times, it has been defined as the free, independent voice of Phoenix, and we'd like to keep it that way. With local media under siege, it's more important than ever for us to rally support behind funding our local journalism. You can help by participating in our "I Support" program, allowing us to keep offering readers access to our incisive coverage of local news, food and culture with no paywalls.
Make a one-time donation today for as little as $1.