Okilly Dokilly is scheduled to perform on Friday, April 14, at Rockbar in Scottsdale. Ris Marek
This weekend’s slate of big concerts in the Valley is a bit of a time warp.

Big Bad Voodoo Daddy will be in town, for instance, for a two-night stint with the Phoenix Symphony. Fellow ‘90s favorites Offspring and Pennywise will be here, too, as they’re co-headlinging KUPD’s Brufest over at Fear Farm in the West Valley. And you can catch Blues Traveler doing their thing at Four Peaks Brewing’s big 20th-anniversary celebration.

There are other noteworthy music events happening around Phoenix this weekend, including a gig by Simpsons-inspired metal band Okilly Dokilly and album release shows by both the Father Figures and the Cult of the Yellow Sign.

You can also check out our extensive online concert calendar for even more shows happening over the next few nights. In the meantime, here are our picks for the best concerts in Phoenix this weekend. The musicians of La Santa Cecilia.
Courtesy of Tempe Center for the Arts
La Santa Cecilia
Friday, April 14
Tempe Center for the Arts
If there is one band that represents the multicultural mix of the Southwest, it's La Santa Cecilia. Since its Latin Grammy nomination in 2015, the LA-born group has been representing its city at major festivals in Texas and New York. They're also picking up the attention of critics, through pieces on NPR's All Things Considered and Latino USA. Further, their hybrid of Latin, rock, and world music has caught the attention of groups like Cafe Tacuba, Lila Downs, Ozomatli, and Los Lobos, all of whom have had La Santa Cecilia open shows for them in recent years. Anyone who has attended their concerts can attest that lead singer Marisol "La Marisoul" Hernandez has one of the most powerful voices in any city, in any genre. Eddie Cota 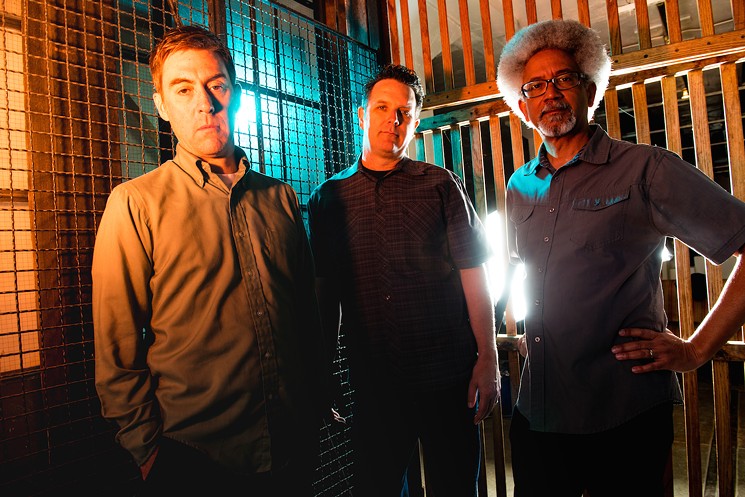 Father Figures return with Heavy Lifting.
Jim Hesterman
The Father Figures Album Release Party
Friday, April 14
Valley Bar
“I don’t believe in the devil/I just can’t at my age,” Father Figures bassist and vocalist Tom Reardon sings on “USS Destroyer,” one of the 12 strident, post-punk songs that comprise the Phoenix band’s new album, Heavy Lifting. It’s a record centered on ego, control, and messianic urges, but Reardon (who’s also a New Times contributor) says his idea of “the devil” is a broad one: “We destroy ourselves and because of that, I can’t believe in the devil.” Over a slice of veggie pizza at Pino’s in Central Phoenix, he says, “Either we are the devil, or the devil doesn’t exist.” Heavy Lifting is the band’s most expressive album to date, the finest showcase for knotty, interlocked sound of the trio, which includes guitarist Michael Cornelius (a founding member of skate punks JFA) and drummer Bobby Lerma. Though you could file the band next to Fugazi and Wire, the album finds the group coming fully into its own. A project full of punk-rock lifers whose DIY roots stretch back to the late ’70s and ’80s, Heavy Lifting proves age doesn’t have to dim vitality.

While it’s tempting to hear the songs as reactions to the age of fake news and Trump (“We promise you a bridge between our great nation’s past and its robust future,” Reardon intones on “NPS”), Reardon wrote most of the lyrics more than a year ago, back when the prospect of a Trump presidency still seemed outlandish.

“Tom was almost like a prophet on this one, predicting this egomaniac who’s taking the reins,” Lerma says.
“I think this record just packages the angst any normal, thinking would have in the last couple of years,” Cornelius adds. “We’ve always been about the angst of the everyman.” But even if the specter of fascism hangs over the record (“It’s a lens you can see things through,” Lerma says), Heavy Lifting is far from a political polemic, drawing inspiration from Alfred Bester’s 1957 science fiction novel The Stars My Destination, Moby Dick, Scorsese films, and advance-fee e-mail scams. Drawing from varied sources, the band’s penned songs as poetic as they are cynical, which articulate much more than rage. “I would like to inspire folks to do something, rather than sit around and bitch about things,” Reardon says. “All these people say punk rock is going to be great during these years, but only if people make great punk rock.” Jason P. Woodbury

Okilly
Friday, April 14
Rockbar in Scottsdale
In case you missed it, Okilly went viral back in 2015 by releasing on Bandcamp four demos based in the genre of , their name for hardcore Simpsons-themed metal. The Phoenix-based quintet started off as a joke, but the group took off like Bart Simpson on a skateboard. Show writer Al Jean even tweeted with his approval. “We were in quite a tizzy,” says Head Ned. “We're still very honored and glad that so many enjoyed what we were doing. Last year, we hit the stage quite a bit to develop our live show and then spent a lot of time getting ready for the studio.” Not ones to trim their mustaches, pray to Jesus, and call it a day, Okilly released their first full-length album, Doodilly, last November. The record, which the band claims of 75 percent of direct quotes from Homer Simpson’s optimistic green sweater-clad Christian nemesis, was recorded at Mesa's Audioconfusion and has helped increased Okilly even more. Those folks who criticize the band in the style of Jeff the Comic Book Guy, but Okilly remain undeterred. For those unconverted to , Head Ned’s response to the negativity epitomizes the positive attitude of the character they are parodying: “A group of Flanders wouldn't be a group of Flanders at all without a group of Homers to criticize them.” Jason Keil 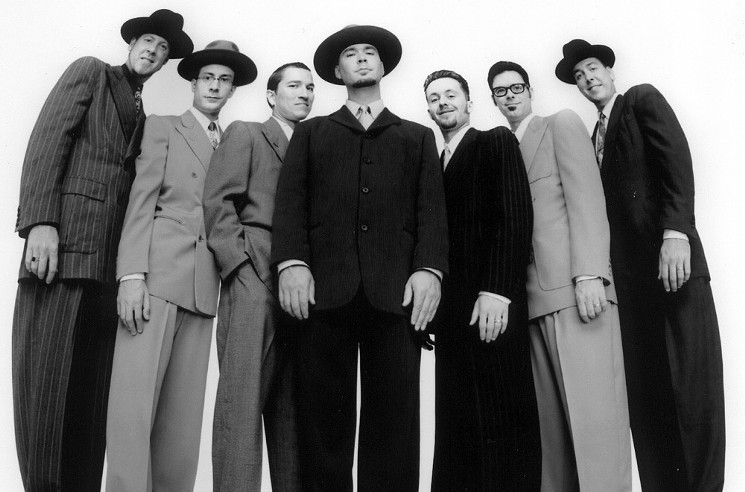 Swing along with Big Bad Voodoo Daddy this weekend.
Courtesy of Phoenix Symphony
Big Bad Voodoo Daddy
Friday, April 14, and Saturday, April 15
Symphony Hall
You may remember Big Bad Voodoo Daddy from the late '90s swing craze and the man-bible flick Swingers. For the uninitiated, the band was one of the most popular nouveau-swing bands of that era, standing right next to Royal Crown Revue, the Brian Setzer Orchestra and Cherry Poppin' Daddies on the pop charts and countless national tours. You couldn't turn on a television without seeing models jumping and jiving for The Gap or even ranch dressing by the summer and fall of 1998. After the fad subsided, many of the bands moved on to more mainstream sounds, but the Voodoos stayed resolute to their sound and continued on. So this weekend dust off your fedoras and party like it's 1998 along with the band, who will be backed up by the musicians of the Phoenix Symphony during a two-night stint in the Valley. Go, daddy, go. Craig Hlavaty 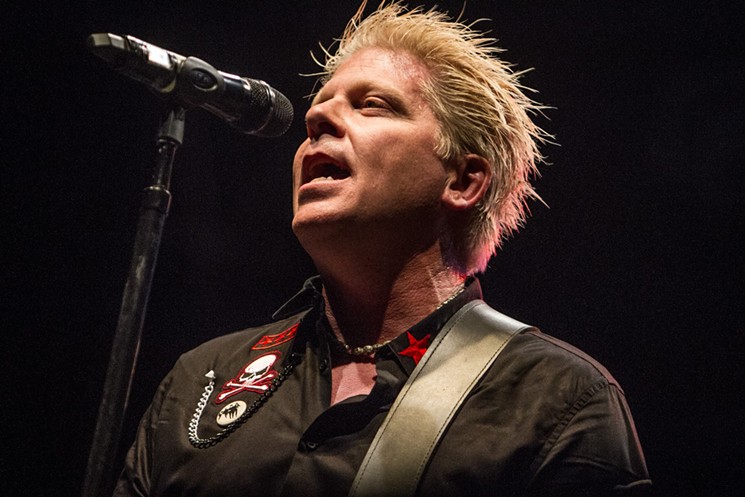 Dexter Holland of The Offspring.
Melissa Fossum
KUPD’s
Saturday, April 15
Fear Farm
Punk was once underground. Bands played in grungy, rat-infested clubs, and forget the music on the radio. About 25 years ago, however, that all changed. The Offspring and Pennywise are two SoCal bands who wound up signing to the same Epitaph record label that helped bring this subversive sound to the masses. So it's sorta fitting they're appearing at an enormous event like KUPD’s in April, even if they took completely different routes to get to this level of success. is a group of Huntington Beach natives who, along with Green Day, pushed punk to heavy rotation on MTV. Videos for "Come Out and Play," "Self Esteem," and "Pretty Fly (For a White Guy)" are a major reason why piercings and dyed hair spread throughout suburbia. Meanwhile, Pennywise was able to capitalize on its label mates' trailblazing punk rock in the mainstream. They’ve sold more than 3 million records, making it one of the most successful independent punk acts of all time. In mid-April, you can catch both legendary punk bands co-headlining , which will also feature performances by All That Remains, Atreyu, Hell or Highwater, and Through Fire. David Rolland

Read on for more "can't miss" concerts this weekend, including Blues Traveler, Patrick Sweany, and the Cult of the Yellow Sign.