Billie Eilish is scheduled to perform on Saturday, April 2, at Gila River Arena in Glendale. Kelia Anne MacCluskey
April kicks off with a long-awaited performance by Billie Eilish, better known as one of the most popular singers in the world currently, as well as gigs by pop-punkers MxPx, Latin singer Marco Antonio Solis, and veteran DJ/producer Jody Wisternoff.

Other highlights of this weekend’s concert offerings include singer-songwriter Stephen Ashbrook celebrating the release of his new EP, the return of the International Pop Overthrow to the Valley, and the alien-themed PHXLIGHTS: Altered Orbit festival landing in Avondale.

Details about each of these shows and events can be found below. And for even more live music happening from Friday, April 1, to Sunday, April 3, visit Phoenix New Times’ online concert listings.

Tempe’s Marquee Theatre, 730 North Mill Avenue, will transform into a Catalina wine mixer writ large as this L.A.-based yacht rock tribute drops anchor at the venue on Friday, April 1. Adorned in costumes and armed with a boatload of covers of soft rock’s greatest hits, the sextet (whose members boast such silly monikers as “Pauly Shores” and “Baba Buoy”) will charm you with their cheese. Feel free to sway to such throwback radio favorites by Hall and Oates, Looking Glass, and Air Supply during your musical cruise. They’ll set sail at 7:30 p.m. General admission is $30 and balcony seating is $50. Benjamin Leatherman

Marco Antonio Solis will forever be credited for influencing norteño and Tejano music in Mexico and the U.S. southwest. At 12, he started improvising on an array of instruments and developing a gift for songwriting. It wasn’t long before Solis' poetic tone, polished style, and pure romanticism led to his founding Los Bukis, one of the most popular Mexican music groups ever. Solis’ yearning-yet-clear voice along with an affinity for profound ballads with intimate and emotionally probing lyrics opened the door for Los Bukis as exponents of popular romantic music.

He slowly affirmed his status as composer/arranger/producer while again showcasing an effortless propensity for soothing inspirations and heartfelt lyrics with the commercially successful “Mi Fantasia” (My Fantasy) and “A Donde Vas” (Where Are You Going) in the mid-’80s. As a soloist, he found international acclaim, including with his 2003 release “Tu Amor O Tu Desprecio,” which won a Best Song of the Year Grammy the following year. Over the next two decades, Solis would record such hits as “Más Que Tu Amigo,” “Ojalá,” and “El Perdedor.” He’s scheduled to perform on Friday, April 1, at Footprint Center, 201 East Jefferson Street. Tickets for the 8 p.m. concert are $34.50 to $494.50. Fernando Ruano Jr. 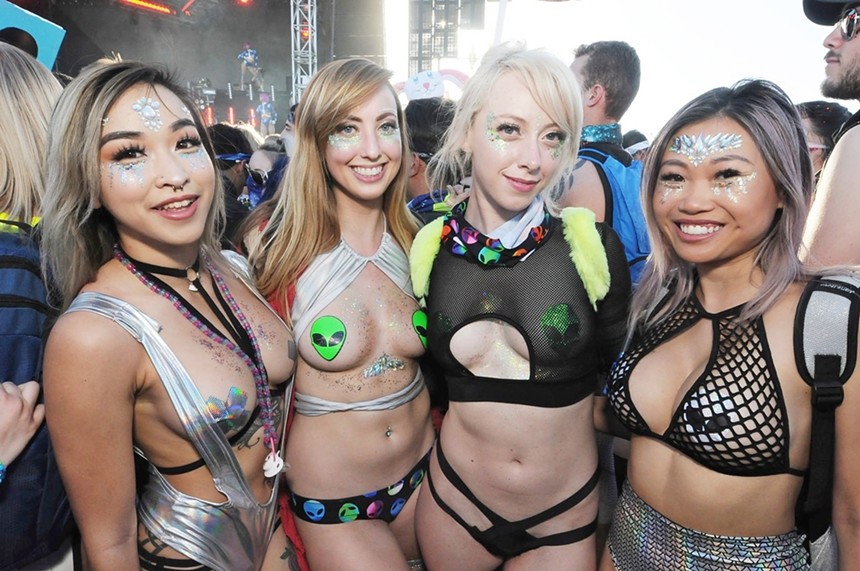 Back in 2015, Phoenix Lights debuted as a UFO-themed EDM festival. It took a break due to the pandemic, but now it's back as a reimagined concept. Presented by local promoter Relentless Beats, PHXLIGHTS: Altered Orbit will feature sets by GRiZ, RL Grime, Liquid Stranger, Zomboy, Rusko, Flosstradamus, Champagne Drip, Jantsen, Smoakland, Leotrix, Proper., and SAAS. The two-day event takes place on Friday, April 1, and Saturday, April 2, at Phoenix Raceway, 7602 Jimmie Johnson Drive in Avondale. Gates open at 7 p.m. and basic general admission is $65 per person each night or $129 for the entire weekend. Jennifer Goldberg

The punks of MxPx are due in the Valley this weekend.
MxPx's Facebook

MxPx have come a long way from its days of performing in the backyard of vocalist/guitarist Mike Herrera’s Bremerton, Washington home in 1992. Back in those days, they were known as Magnified Plaid and were basically trying to imitate NOFX while developing their own take on pop-punk. Within a few years, Herrera and bandmates Yuri Ruley (drums) and Tom Wisniewski (backing vocals and lead guitar) were playing catchy tunes and became poster boys for Christian punk. Almost a dozen albums later, MxPx has shed its Christian leanings but have maintained a respectable following while continuing to make music and tour with workmanlike efficiency. Fat Mike should be proud. They’re currently touring with Zebrahead, Bad Cop/Bad Cop, and Mercy Music and will roll into Marquee Theatre, 730 North Mill Avenue in Tempe on Saturday, April 2. Doors are at 6 p.m. and tickets are $29.50 to $67. Benjamin Leatherman and Dave Herrera 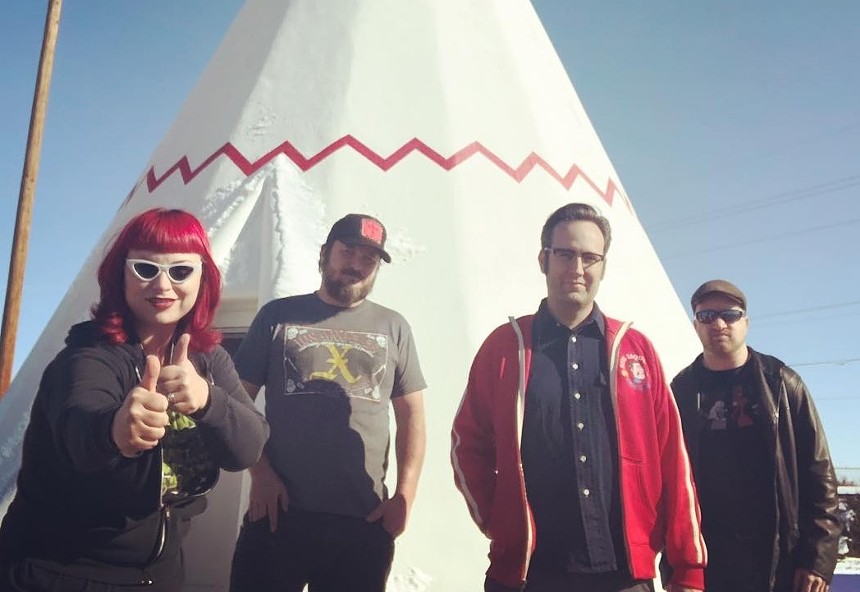 The Rebel Set are scheduled to perform at the International Pop Overthrow on Saturday, April 2.
The Rebel Set's Facebook

The International Pop Overthrow has showcased unsigned power-pop bands for decades in cities around the world (from London and Vancouver to Portland, NYC, and even Phoenix). This year, the IPO show in the Valley will happen on Saturday, April 2, at Cactus Jack's Ahwatukee Tavern, 4747 East Elliot Road. The lineup includes The Exbats, Freezing Hands, The Rebel Set, The Sugar Skulls, Brenyama, Street Duo, Exploding Oranges, FEED, Randy Forte, The Joeys, and Naked Chollas. Performances start at 3 p.m. and admission is $10. Benjamin Leatherman

Stephen Ashbrook’s roots in the Valley’s music scene run deep. The singer-songwriter spent the formative years of his career in Arizona, performing with local band Satellite during the ‘90s heyday of jangle-pop alongside the legends and usual suspects of the era. In 1998, Ashbrook transitioned into a solo act and widened his horizons into a more rootsy territory, releasing the critically lauded album Navigator on now-defunct Tempe label Epiphany Records. Follow-up releases like American B-Sides and greater fame followed in the early 2000s as he left Phoenix behind for the Pacific Northwest.

Ashbrook has since moved back to our neck of the woods and recently released a new EP, Olly Olly. The six-song album is heavy on the kind of utterly listenable Americana and alt-rock Ashbrook has always had a penchant for (with a few poppy hooks thrown in), proving he may have changed addresses over the years but hasn’t lost a step along the way. He will celebrate the EP’s release on Saturday, April 2, at Last Exit Live, 717 South Central Avenue. The show is at 8 p.m. and Scott Howard opens. Tickets are $20. Benjamin Leatherman

If it seems like you've heard the name Billie Eilish a great deal the past few years, that's only because you have. From sweeping the Grammys in 2020 to winning an Oscar recently for performing the theme to No Time to Die, the pop singer-songwriter has been all over pop culture and social media. Her career arc has been rising steadily for seven years. When she was just a fresh-faced 14-year-old, she and her older brother, Finneas O'Connell — a singer-songwriter and producer in his own right who has collaborated extensively with his sister — uploaded the short but catchy tune "Ocean Eyes" to SoundCloud. It quickly gained momentum, and despite having few songs to her name, Eilish promptly began developing a dedicated following.

Its success pales in comparison to that of “Bad Guy,” Eilish’s breakthrough single from her 2019 debut, When We All Fall Asleep, Where Do We Go? The track reached the apex of the Billboard Top 40 charts, got constant radio airplay, and earned her an armful of Grammy Awards, including Record of the Year. Her 2021 follow-up, Happier Than Ever, has also been a runaway success, resulting in numerous sold-out dates on her current tour. That includes her performance on Saturday, April 2, at Gila River Arena, 9400 West Maryland Avenue. It’s the first of two shows Eilish will stage in the Valley in early April and tickets are only available on the secondary market. The concert starts at 7:30 p.m. and Duckwrth opens. Carolina del Busto and Benjamin Leatherman 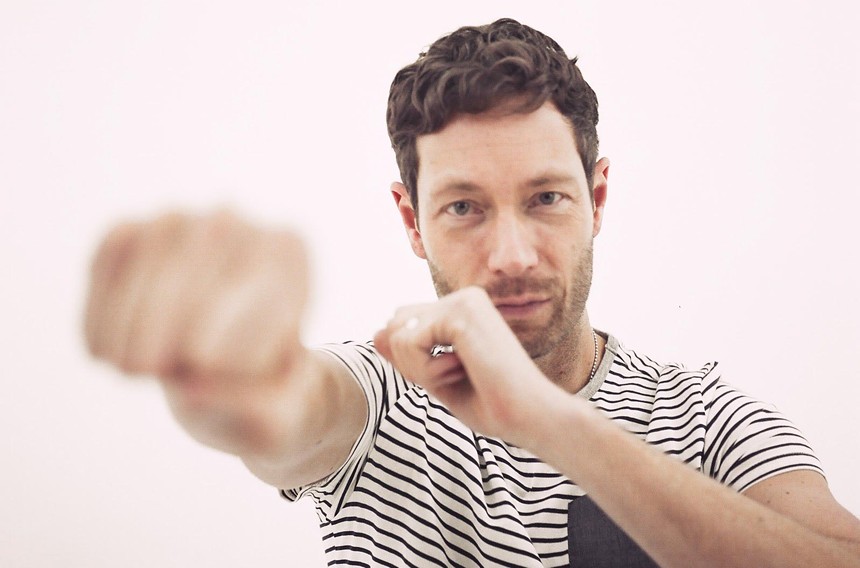 Longtime fans of electronic dance music and scene veterans will recognize the name Jody Wisternoff. In the mid-’90s, he teamed with fellow Englishman Nick Warren to form the influential DJ duo Way Out West, which lit up dance clubs worldwide with their mixes of trip-hop, breakbeats, and progressive house over the next decade or so. These days, Wisternoff is still producing and performing, as well as creating remixes for Above & Beyond's deep house imprint Anjunadeep when he isn’t busy with Way Out West. He’s scheduled to perform solo at Shady Park, 26 West University Drive in Tempe, on Saturday, April 2. Local DJs Yahra and Michael Hooker will provide opening sets starting at 9 p.m. Tickets are $20. Benjamin Leatherman The Noodles at the now-defunct Sail Inn in 2014.
Benjamin Leatherman

In spring 1997, local Grateful Dead tribute act The Noodles started performing at venues around the Valley, including at the now-defunct Tempe venue The Sail Inn. As guitarist John Reuter remembers, the gig came after he hit up the bar’s owner Gina Lombardi. “I told her, ‘Look, you've got six guys passed out in front of a half-pitcher of beer on Sundays. What if we start coming in and play those afternoons from 3 to 7?” The Sunday sessions soon became a favorite hangout for local Deadheads, rock fans, and the Tempe crowd. It was part of a long, strange trip that the Noodles have been on for the past quarter-century. This weekend, the band will celebrate its 25th anniversary at Cactus Jack's Ahwatukee Tavern, 4747 East Elliot Road, which is co-owned by Lombardi. The party on Sunday, April 3, will start at 3 p.m. and also feature sets by The Sugar Thieves, Shawn Johnson, and other special guests. Admission is $10. Benjamin Leatherman
KEEP PHOENIX NEW TIMES FREE... Since we started Phoenix New Times, it has been defined as the free, independent voice of Phoenix, and we'd like to keep it that way. With local media under siege, it's more important than ever for us to rally support behind funding our local journalism. You can help by participating in our "I Support" program, allowing us to keep offering readers access to our incisive coverage of local news, food and culture with no paywalls.
Make a one-time donation today for as little as $1.