Billy Idol is scheduled to perform on Friday, August 12, at Celebrity Theatre. Danny Zelisko Presents
This weekend, you can catch ‘80s icon Billy Idol at his first Valley show in years, a music/stand-up gig by anti-comedy star Tim Heidecker, and a performance by boy band Big Time Rush.

What else is on tap for the metro Phoenix concert scene over the next few nights? Geek rapper Mega Ran will celebrate the release of his newest project while local hip-hop ensemble Odd Squad Family visits the Nile Theater in Mesa, and the latest Full Moon Festival takes over Sun Studios of Arizona in Tempe.

Details about each of these concerts and music events can be found below. And for even more live music happening around the Valley from Friday, August 12, to Sunday, August 14, hit up Phoenix New Times' concert calendar. 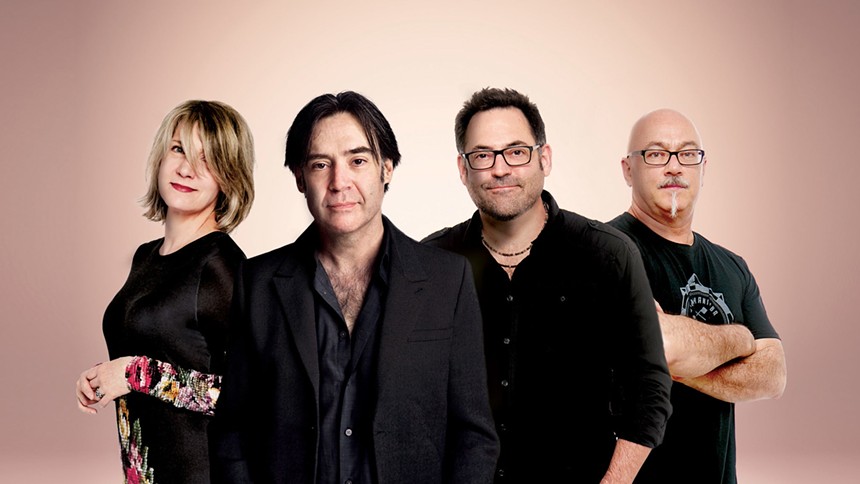 Friday, August 12
Musical Instrument Museum, 4725 East Mayo Boulevard
What is Canada’s leading export? You might be tempted to say “lumber” or maple syrup” or “sketch comedy” but you’d be wrong. Our neighbors up in the Great North have one particular national specialty they excel at producing in large quantities: weirdos. From Saskatchewan to Ontario, from French Canada to the mean streets of Scott Pilgrim's Toronto, Canada has produced a storied series of weirdos. Among them are body-horror genius David Cronenberg, campy silent-film lover and cult cinema auteur Guy Maddin, model train enthusiast Neil Young, and alt-rock oddballs the Crash Test Dummies. The band's most prominent feature is the deep bass vocals of singer Brad Roberts, who sounds like a gentleman frog holding forth about his travels abroad over a snifter of brandy. Rocketing to unlikely international fame in 1993 when their hit song "Mmm Mmm Mmm Mmm" hummed its way into our hearts, the Dummies built a fan base with tunes like “Superman’s Song” and their winsome cover of XTC’s "The Ballad of Peter Pumpkinhead.” Let’s give our weirdo neighbors a warm welcoming hum when they come to the MIM this weekend. 7 p.m., tickets available through resellers. Ashley Naftule 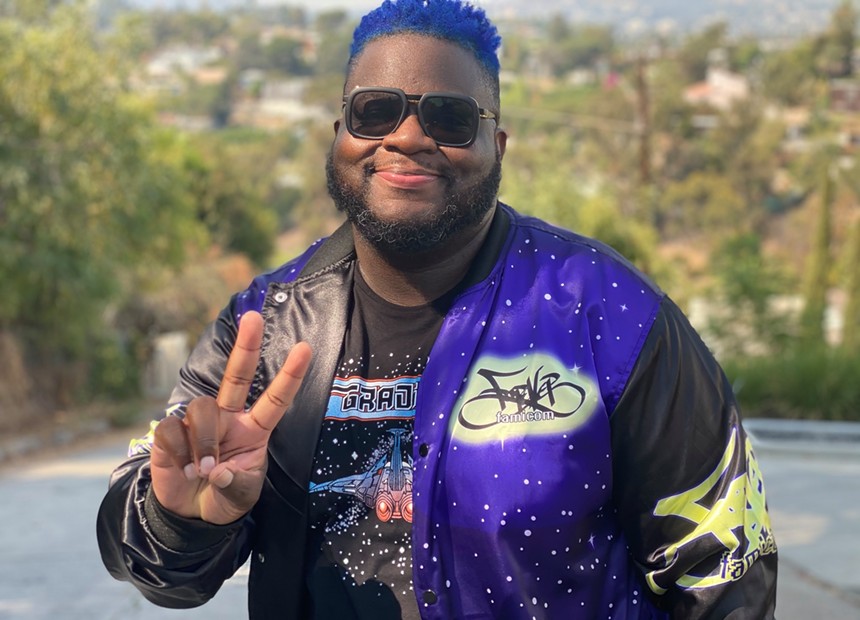 Friday, August 12
Valley Bar, 130 North Central Avenue
Geek rap icon and Valley resident Mega Ran recently dropped Protoculture Season, a new album he created along with local hip-hop artist Penny The Great and SlopFunkDust, and will celebrate the release this weekend at Valley Bar in downtown Phoenix. Much like the bulk of his musical oeuvre, which has been largely inspired by video games and pro wrestling, the project pays tribute to nerdy subject matter. All six tracks of Protoculture Season riff on the influential anime series Macross, which was released in the U.S. as Robotech and embraced by geeks like Mega Ran and the other artists behind the album. According to his Facebook, it's meant for fans of “transforming robots, explosions, [and] love,” and contain little in the way of “wack rap.” Hear for yourself when the three rappers perform songs from Protoculture Season at the show. Whitney Peyton and 8-Bit Mammoth will open. 7 p.m., $15 via seetickets.us. Benjamin Leatherman Friday, August 12
The Van Buren, 401 West Van Buren Street
If there’s a Mount Rushmore for anti-comedy, Tim Heidecker’s grinning mug belongs up there, sandwiched between Andy Kaufman and Eric Andre. Between his work with Tim and Eric Awesome Show, Great Job! and On Cinema, Heidecker has crafted a body of work that blurs the line between reality and gag. It even goes so far as to turn a Siskel and Ebert At the Movies parody show into a program so dense with continuity and character development it led to a staged murder trial. Heidecker is as serious about his love of ’70s singer-songwriter music as he is about committing to the bit. An active part of the Philadelphia music scene in the early 2000s, Heidecker has been writing songs for years — both as a solo act and as half of the Heidecker & Wood duo with Awesome Show composer David Wood. He’s as much a Parrothead as he is a prankster, adept at tapping into the margarita-sipping mellow vibes of yacht rock without losing his cutting wit or gifts of observation. He's a little bit Andy Kaufman and a little bit Harry Nilsson. Throw a little umbrella in there and you got yourself a winning cocktail. 8 p.m., $39.50-$97.50 via ticketmaster.com. Ashley Naftule

Friday, August 12
Celebrity Theatre, 440 North 32nd Street
Given Billy Idol’s status as an ‘80s icon, his wide-reaching fandom as a rock and punk legend, and heavy airplay during MTV’s early years, it shouldn’t come as any surprise that tickets for his sold-out show at Celebrity Theatre this weekend were likely snatched up by boomers and Gen Xers alike. The good news is that you can still score entry to the gig at the 2,650-person venue through the secondary market (read: resellers), albeit for at least $150 or more per ticket. It’s a small price to pay to be in the audience for Idol’s first Valley performance in several years, which will also feature his longtime guitarist and collaborator Steve Stevens. As is the norm for any legacy artist, expect to hear all of his biggest hits — including “Rebel Yell,” "Dancing With Myself," "Cradle of Love," and "Eyes Without A Face" — as well as singles and selections from his most recent album, 2021’s The Roadside EP. 7:30 p.m. Benjamin Leatherman

Friday, August 12
Nile Theater, 105 West Main Street, Mesa
"Fighting for the odd and inspiring the rest" is the credo of local hip-hop group Odd Squad Family. Consisting of members Nubs, Snowman, and A-Factor, the trio strives to spread positivity through its music. A rare genetic condition has left Nubs without any limbs, and Snowman has albinism. Those features have created unique struggles for the rappers, who turn them into bars. Almost a decade since their founding, Odd Squad Family continue to carry this soul and spirit within their musical efforts. They’ve released four albums thus far, including 2020’s The Flamingo Complex, all of which are filled with music that's honest, relatable, and inspiring. It's hard not to love Odd Squad Family. 7 p.m., $10-$75 via eventbrite.com. Nicole Latino
click to enlarge

Saturday, August 13
Sun Studios of Arizona, 1425 West 14th Street, Tempe
One of the most important things about maintaining a solid music scene is actually caring about it. Besides attending the occasional show or buying merchandise from their favorite musician, the average listener of the average music scene doesn’t support beyond that. Without sustained support from the community, it is hard for a scene to truly showcase, or promote, the hidden talent it holds. Locally, events like the Full Moon Festival, the increasingly popular multigenre festival, are specifically designed to shine a light on some of the amazing artists who are on the rise. As such, the latest edition of the festival on Saturday night will feature performances by a slew of local musicians and DJs. The lineup will include sets by the DJs of the Techno Snobs collective, and local bands like The Color 8 and District 13. Other artists scheduled to perform include Anais Sasha, Abstract Circle, Lance Fairchild, 2 Soon, The Real Khiry, and Cobra Shell. 8 p.m., $35-$40 via aftontickets.com. Jaron Ikner

Saturday, August 13
Arizona Financial Theatre, 400 West Washington Street
When listening to songs by Southern California-based boy band Big Time Rush, you not only hear the foursome’s catchy hooks and poppy songs but also the sound of history repeating. Like the Monkees before them, the members of Big Time Rush were assembled with the express intent of starring in a TV show in order to cash in on current pop trends. Their respective programs featured misadventures by the band while trying to survive living in L.A. mixed in with songs from their latest album. The similarities don’t end there. Both acts scored numerous hit singles before ultimately parting ways less than five years after their formation, only to reunite years later for nostalgia-soaked tours. That said, Big Time Rush’s biggest singles (such as "Boyfriend," "Music Sounds Better with U," and "Windows Down") are nowhere near as durable as the Monkees’ greatest hits. That opinion probably matters little to the aging millennials who grew up on their Nickelodeon show and will pack Arizona Financial Theatre this weekend. With Spencer Sutherland; 8 p.m., $79-$299 via livenation.com. Benjamin Leatherman
KEEP PHOENIX NEW TIMES FREE... Since we started Phoenix New Times, it has been defined as the free, independent voice of Phoenix, and we'd like to keep it that way. With local media under siege, it's more important than ever for us to rally support behind funding our local journalism. You can help by participating in our "I Support" program, allowing us to keep offering readers access to our incisive coverage of local news, food and culture with no paywalls.
Make a one-time donation today for as little as $1.