Best Phoenix Concerts This Weekend: Twenty One Pilots, Pitbull, Boots in the Park Twenty One Pilots are scheduled to perform on Friday, September 16, at Footprint Center. Ashley Osborn
Believe it or not, the end of the Valley’s hot season is in sight. Temperatures in the Valley have definitely begun trending downward moving into mid-September, meaning it's not as tortuous to get out and do something these days. It’s even better at night, with the mercury getting down into the 80s after dark.

The upshot: Attending any of this weekend’s biggest concerts, including outdoor gigs like Saturday’s Boots in the Park festival or the Pitbull and Iggy Azalea tour stop at Ak-Chin Pavilion on Sunday, won’t be an unbearable experience.

What else is on tap for metro Phoenix’s concert calendar this weekend? Performances by pop/alternative hip-hop duo Twenty One Pilots, alt-folk band Judah and the Lion, and Bisbee daddy/daughter rock act The Exbats, as well as the retro-focused Flashback Party Jam, that’s what.

Friday, September 16
Footprint Center, 201 East Jefferson Street
The center of a black hole in space is called a singularity. It's here where there is the most extreme concentration of mass, everything compacting into a tiny volume of space. If you were to concentrate the whole corpus of recorded music over the last 20 years into a singularity and dropped a microphone inside it, the sound probably would be like Twenty One Pilots. Rock, blue-eyed soul, alternative hip-hop, electro, R&B, pop, reggae, emo, and dance music are all mashed together into algorithmic earworms. Twenty One Pilots is what would happen if the shuffle button on a “Something For Everyone” playlist gained sentience. Composed of duo Tyler Joseph and Josh Dun, the band hit an astonishing winning streak early on. Its debut album Vessel was the second record in history where every track hit gold status. Twenty One Pilots achieved an all-gold-everything accomplishment again with their blockbuster fourth album Blurryface. Joseph sings over loops and Dun's snappy drums with a turducken-like voice: a scream stuffed inside a rap stuffed inside a croon. What keeps the band relatable and engaging is its knack for irresistible hooks and Joseph’s deeply personal and turbulent lyrics, which paint vivid pictures of depression, romantic angst, and fear. With Peter McPoland; 8 p.m., $74.50-$305 via ticketmaster.com. Ashley Naftule

Saturday, September 17
Footprint Center, 201 East Jefferson Street
Given all the throwback jams broadcast by Mega 104.3, a one-night nostalgia concert is very on-brand for the local old-school R&B/hip-hop radio station. Like one of its playlists, the show is filled with '80 and '90s hitmakers and radio favorites, including headliner Sir Mix-A-Lot of “Baby Got Back” fame. Expect to hear the crowd inside Footprint Center singing along with the legendary rapper as he glorifies gargantuan glutei maximi. The lineup for the Flashback Party Jam also will feature hip-hop artists and acts like Digital Underground, Kid 'n Play, Tag Team, The Sugarhill Gang, 69 Boyz, and Treach from Naughty By Nature as well as R&B groups 112 and Hi-Five. 7:30 p.m., $35.50-$55.50 via ticketmaster.com. Benjamin Leatherman


Judah and the Lion

Saturday, September 17
The Van Buren, 401 West Van Buren Street
And then there were two. Nashville alt-folk artists Judah and the Lion lost a couple of members over the last few years but you couldn’t tell from listening to Revival, their latest album. The band, which originally featured four members, sounds positively huge on the title track, a magisterial cry for help and grace from frontman Judah Akers. Revival is Judah and the Lion doing what they do best: dragging Americana into the 21st century. Anchored by Akers’ guitar and Brian Macdonald’s mandolin, Judah and the Lion weave a tapestry of folk, electropop, and bluegrass. It’s a soulful melange, one that sounds aged like a fine vintage but with enough contemporary touches (courtesy of the electronic flourishes in their production) to keep it from curdling into corn pone nostalgia. While the band started as a Christian act, it has moved in a more secular direction over the years. The yearning for transcendence is all over its music, but it isn't preachy. Think of the group's lyrics like a Magic Eye poster: God is in there if you look long enough. With Smallpools; 8 p.m., $35/$40 via livenation.com. Ashley Naftule 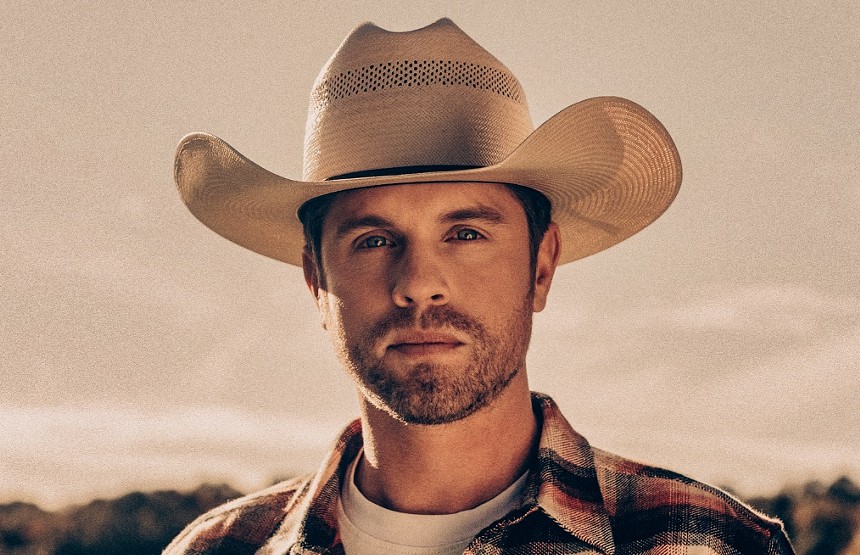 Dustin Lynch will be one of the artists performing at Boots in the Park.
BBR Music Group

Boots in the Park

Saturday, September 17
Tempe Beach Park, 80 West Rio Salado Parkway, Tempe
The fall festival season kicks into gear this weekend with this one-day country music shindig on Saturday next to Tempe Town Lake headlined by multiplatinum recording artist and Grammy winner Tim McGraw. He’s not the only superstar on the bill, as Tennessee-born singer Dustin Lynch and RCA Records Nashville signee Ryan Hurd also are scheduled to perform at the event, which is being put on by Los Angeles-based concert promoter Activated Events. Canadian country queen Tenille Arts, Nashville-based crooner Frank Ray, and up-and-comer Joe Peters also will take to the outdoor stage at the festival. Amble on down and sit for a spell, y’all. 2 p.m.; $129-$149 for general admission, $249 for VIP via seetickets.us. Benjamin Leatherman

Saturday, September 17
Valley Bar, 130 North Central Avenue
Bisbee’s Exbats may not have a sweet multicolored bus like The Partridge Family but they do share one thing in common with that traveling clan: They’re also a family affair. A power trio, the band's heart and soul are father-daughter songwriting team Kenny McLain (guitars) and Inez McLain (drums). They played their first show together when Inez turned 12, kicking off a career that has produced a handful of propulsive, catchy albums and tours around the world. With the addition of bassist Bobby Carlson, the band sounds fuller and more impactful than ever. The Exbats' style is stripped-down garage rock that draws from the golden age of doo-wop and girl groups. Like The Ramones, they love The Ronettes and snotty attitudes. While many of the sounds they conjure are retro, all those handclaps and multitracked “oooooh” backing vocals and fuzz-toned guitars don’t sound like museum pieces. They’re animated by the enthusiasm of the McLains, who invest each of their songs with an intensity that has no expiration date. With Spiritual Warfare and the Greasy Shadows; 7 p.m., $10/$12 via seetickets.us. Ashley Naftule 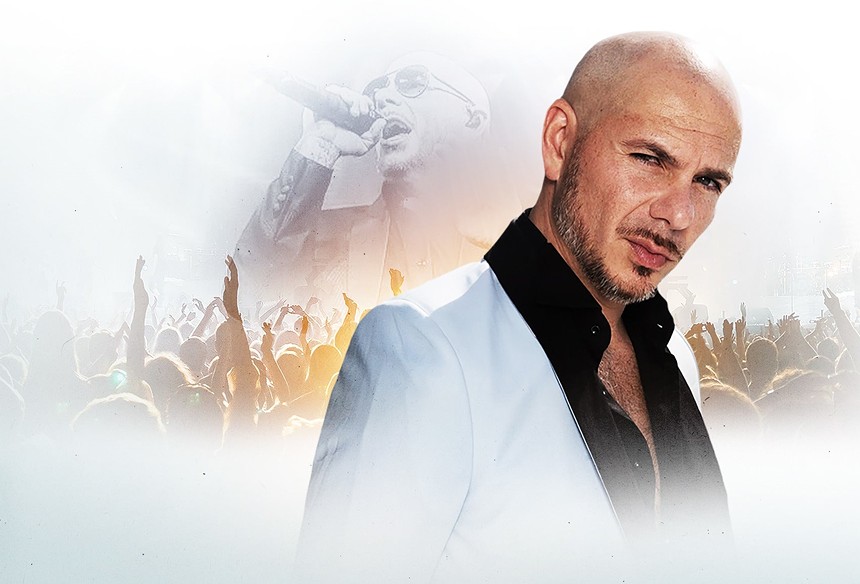 Sunday, September 18
Ak-Chin Pavilion, 2121 North 83rd Avenue
Pitbull (a.k.a. Mr. Worldwide) is bringing a bit of the 305 to the 602 this weekend — and he’s bringing Iggy Azalea along for the ride. The two superstars, who joined forces for the Can't Stop Us Now tour, differ in their birthplaces and approaches to the rap game (he’s from Miami and fuses elements of Latin, reggaeton, and hip-hop; she was born in Australia and favors a poppier sound). But both have sold millions of records and racked up awards. Neither has a new album out, but both have a wealth of blockbuster tracks and singles to power their respective sets: Iggy’s include “Fancy,” “Black Widow,” and "Beg for It,” while Pitbull’s are too numerous to count. The show has no openers, so don’t be late if you want to catch their sets in their entirety. 8 p.m., tickets are available on the secondary market. Benjamin Leatherman
KEEP PHOENIX NEW TIMES FREE... Since we started Phoenix New Times, it has been defined as the free, independent voice of Phoenix, and we'd like to keep it that way. With local media under siege, it's more important than ever for us to rally support behind funding our local journalism. You can help by participating in our "I Support" program, allowing us to keep offering readers access to our incisive coverage of local news, food and culture with no paywalls.
Make a one-time donation today for as little as $1.