Boots In The Park Is Postponed, Dua Lipa Is Coming, and More Phoenix Concert News

Paul Stanley catches some air during a 2016 concert by KISS in Phoenix. Jim Louvau
click to enlarge

Country musician Jon Pardi.
Activated Events
As the pandemic stretches past the 18-month mark, metro Phoenix’s concert scene is attempting to carry on while grappling with issues related to COVID-19 and the growing spread of the Delta variant.

Independent music venues across Arizona will begin requiring proof of vaccinations or a recent COVID-19 negative test result to attend shows starting next week. Meanwhile, nationally touring artists like Bush, Stone Temple Pilots, and Billy Bob Thornton and the Boxmasters are canceling their shows in the Valley because of the ongoing pandemic.

Here’s a rundown of recent concert-related news from around the local scene, including details about a country music festival being postponed, rock legends KISS resuming their tour, and a notable show being announced for 2022.

Boots In The Park Postponed

Country music fans who planned to attend this weekend’s Boots in the Park music festival at Tempe Beach Park will want to hold onto their tickets. Southern California-based promoter Activated Events postponed the daylong event, which was originally set for Saturday, September 18, because of a new city of Tempe policy announced in late August requiring proof of COVID-19 vaccinations at all events at the park.


According to an email sent by Activated Events to ticketholders last week announcing the festival’s postponement, the company said it felt the policy “is an unrealistic requirement that is being implemented specifically on our event with only two weeks' notice.” A new date for the event hasn’t been set yet but all previously sold tickets will be honored.

Alt-rock radio favorites Bush and Stone Temple Pilots have canceled the fall tour they were co-headlining, which was scheduled to kick off on Thursday, September 30, at Mesa Amphitheatre, due to “unfortunate and unavoidable COVID-related circumstances.” Oscar-winning actor Billy Bob Thornton and his Americana/rock band The Boxmasters have also pulled the plug on all of their upcoming dates, including a stop at The Rhythm Room on Thursday, October 16, for similar reasons. Refunds for both concerts will able available at your point of purchase. 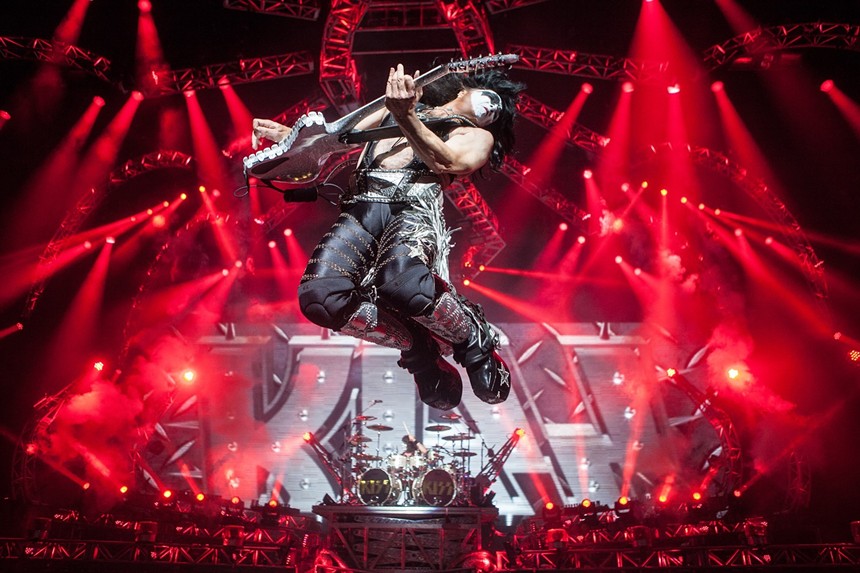 Paul Stanley catches some air during a 2016 concert by KISS in Phoenix.
Jim Louvau

Good news for local fans of rock legends KISS: They’ve resumed their final farewell tour after recent issues with COVID-19. In late August, band members Gene Simmons and Paul Stanley tested positive for the virus, causing five shows on their End of the Road World Tour to be postponed. (Their upcoming date at Ak-Chin Pavilion on Sunday, September 26, was not affected, though.) Both musicians have recovered and the band returned to the road on September 9. So get your face paint ready, since their Valley show will be the last chance to see KISS perform locally … unless they change their minds again.

Dua Lipa and Megan Thee Stallion Coming to Phoenix in 2022

Grammy-winning pop/R&B singer-songwriter Dua Lipa has announced a North American tour in connection with her new album, Future Nostalgia, and it includes a stop at downtown Phoenix’s Footprint Center on Tuesday, March 20, 2022. Rapper Megan Thee Stallion and indie-pop singer-songwriter Caroline Polachek will join Lipa on the tour. Tickets for the Phoenix show will be $40 to $124.50 and go on sale at 10 a.m. on Friday. After an 18-month hiatus caused by the pandemic, the Phoenix Symphony is getting ready to return to live performances and the orchestra has revealed the schedule for its 2021-22 season. A total of 20 events have been announced (most taking place at Symphony Hall in downtown Phoenix) and will include signature PSO events like its annual “Holiday Pops” concert and performances of Handel's Messiah in December.

The season, which celebrates the orchestra’s 75th anniversary, starts on Friday, October 22, with a three-night event titled “An Evening with the Romantics” featuring still featuring selections from Verdi and Tchaikovsky. It will be the PSO’s first live performance since March 2020. Tickets and the complete schedule are available here.

British indie rock band Glass Animals have moved a stop on their Dreamland tour scheduled for September 15 at Arizona Federal Theatre to next spring. The new date will take place on March 4, 2022. No reason for the rescheduling was stated. According to a post on the theater’s Facebook page, all previously purchased tickets for the concert will be honored.
KEEP PHOENIX NEW TIMES FREE... Since we started Phoenix New Times, it has been defined as the free, independent voice of Phoenix, and we'd like to keep it that way. With local media under siege, it's more important than ever for us to rally support behind funding our local journalism. You can help by participating in our "I Support" program, allowing us to keep offering readers access to our incisive coverage of local news, food and culture with no paywalls.
Make a one-time donation today for as little as $1.