Demi Lovato is scheduled to perform on Sunday, March 4, at Talking Stick Resort Arena. Courtesy of Hollywood Records
So what’s the plan for this weekend? There’s a good chance it involves heading out to a concert, because there will be tons of ‘em happening around the Valley.

As we’re sure you’re aware by now, the long-awaited and much-anticipated M3F is taking place at Hance Park. And it's arguably the biggest live music event of the weekend. And rightly so, as it will feature an enormous lineup of big names across three days of performances.

It’s not the only gig in town, however.

For proof, look no further than our list of the 11 best concerts in Phoenix this weekend. It includes shows by big names (like Demi Lovato and K. Michelle) and a few big parties (Electronic Holi, Rogue Bar’s 11-year anniversary) over the next 72 hours.

Read on for more info or check out Phoenix New Times’ concert calendar for even more options.

The McDowell Mountain Music Festival is back with a new lineup and a new name: M3F. But the abbreviated moniker is the only place you’ll find cutbacks at the 15th annual edition of this jam-packed party.

The event’s 2018 lineup is as loaded as ever. M3F promises three days of good tunes blasting from booming sound systems, drum circles, food trucks, and plenty of vendors over the first weekend of March. A dozen Phoenix-area acts are scheduled to take the stage at downtown Phoenix’s Hance Park between sets from visiting performers and headliners like Nick Murphy (the artist formerly known as Chet Faker), Dr. Dog, O.A.R., Anderson East, and Father John Misty.

Local bands are, of course, jazzed to be included in the mix, including Phoenix Afrobeat Orchestra, Wyves, The Lonesome Wilderness, Jerusafunk, Treasurefruit, Spark Jack Daddy, and Jane N’ the Jungle. Amy Young

Few bands can evoke an entire era in just a few notes, but listen to a snippet of any Psychedelic Furs song and you’ll find yourself smack-dab back in the ’80s. Whether it’s the triumphant guitars of “Pretty In Pink” or the xylophone-esque melodies of “Love My Way,” something about the music feels as anchored to that time period as Ms. Pac-Man machines. It’s no wonder Stranger Things, this decade’s most reliable time machine, used the Furs’ “The Ghost In You” as part of its soundtrack.

While the Furs used keyboards and synths as ably as their ’80s contemporaries, Richard Butler’s vocals set them apart. Raspy and worn, his burnt-out croon would sound more at home fronting a Tom Waits-ian bar band than a New Wave outfit. It’s what gives the Furs’ music a timeless quality, While the melodies and instruments will forever date them, Butler’s nicotine-stained vocals makes them sound like they could have existed in any era. That kind of rumpled, weary grace never goes out of style. Ashley Naftule

It’s tough running a music venue in this day and age. There a million things to deal with – changing trends, money issue, fickle customers, and even more fickle musicians, just to name a few – all while trying to stay afloat and stay relevant. So it seems all the more remarkable when a local venue survives and thrives for years, just like Rogue Bar has done for more than a decade.

The famed Scottsdale rock bar will be celebrating the 11th anniversary of current owner Manny Tripodis taking over the spot with a big blowout on Friday night. Local bands scheduled to perform include Colour TV, Sunset Voodoo, Twin Ponies, The Elegy Machine, and Terra Fractal. Feel free to raise a toast to to the institution, its employees, and its owner, or you can just rock out. Benjamin Leatherman 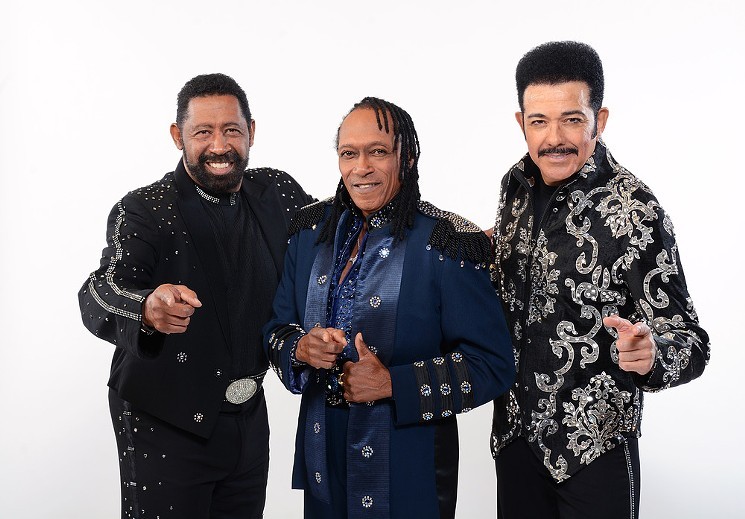 One group that often misses out on props for both their longevity and iconic status is The Commodores, originally formed when the members met at Tuskegee University and began playing the local club and college circuit. That was 1968. A year later, the band’s drummer and current singer, Walter “Clyde” Orange, was invited to join by the group’s original bassist, Michael Gilbert.

Orange penned two of the band’s biggest hits: one of their first, “Brick House,” and their last, the Grammy-garnering “Night Shift.” In between, he’s seen the band grow and prosper, even despite a seemingly steady shift in their personnel roster, the most significant of which was the loss of singer/songwriter Lionel Richie.

These days, the band (which consists of Orange, William "WAK" King, and J.D. Nicholas) continues to perform around 60 dates a year, filling their sets with the many hits that once dominated on pop, soul, and even country music playlists for much of the ‘70s and ‘80s. This weekend, they'll be at Wild Horse Pass Hotel & Casino in Chandler for a performance inside the Ovations Showroom. Lee Zimmerman

When it comes to the first Friday of the month, the festivities along Roosevelt Row aren’t the only art-filled action happening in Phoenix that night. There’s also the Full Moon Festival, which also offers a mix of art, music, and social rites, albeit with more of an underground feel.

This month’s edition of the festival takes place on Friday, March 2, and celebrates the coming of the worm moon. The eight-hour event will fill District 8 with local artists, live performances, and vendors. The band lineup will include gigs by Fairy Bones and Jeremiah Christo while the DJ lineup will offer sets by Korey Wade, Nasty Humanz, Grackle Beats, and Uncanny Valley.

The festival runs from 8:08 p.m. until 3:33 a.m. Costumes reflecting the “magic and majesty of the moon” are encouraged, and the event is for the 18-and-over crowd only. Admission is $15. See the festival's Facebook page for more details. Benjamin Leatherman

In military slang, a “soft kill” means an attack that leaves an enemy disabled instead of dead. It’s an apt name for the post-punk sound conjured by Portland, Oregon, singer-guitarist Tobias Sinclair and his cohorts. As Soft Kill, they smother and numb listeners with layers of hazy sound.

Before founding Soft Kill, Sinclair was a part of the goth band Blessure Grave. Those dark roots are evident in Soft Kill’s music and the way they thread moments of gauzy melodic beauty through spiky, doom-y instrumentals. Sinclair’s cavernous vocals sound like they’re echoing from the bottom of a canyon.

On albums like 2016’s Choke, Soft Kill manage to sound fresh and contemporary while also paying homage to their post-punk ancestors. You can hear the influence of groups like Magazine, 154-era Wire, and The Chameleons. They make their debt to the chiming and atmospheric guitar sounds of The Chameleons even more explicit by featuring that band’s frontman, Mark Burgess, on Choke cut “On The Inside.” Two generations of post-punk musicians with decades of experience between them, Burgess and Soft Kill sound like they’ve been playing together for years. Ashley Naftule