Jazz artist Danny Kusz. Courtesy of Tempe Center for the Arts
It's the weekend and you've got roughly 72 hours of free time at your disposal. So going to do with it?

You can mosey on over to Chase Field to get rowdy with Kenny Chesney, feel the grooves with the Phoenix Afrobeat Orchestra, dance the night away with Peking Duk, or soak up some culture during the latest Downtown Chamber Series performances.

The choice is up to you.

Details about each of these shows (and many more) can be found below. And for even more live music happening around the Valley, hit up Phoenix New Times' online concert calendar. 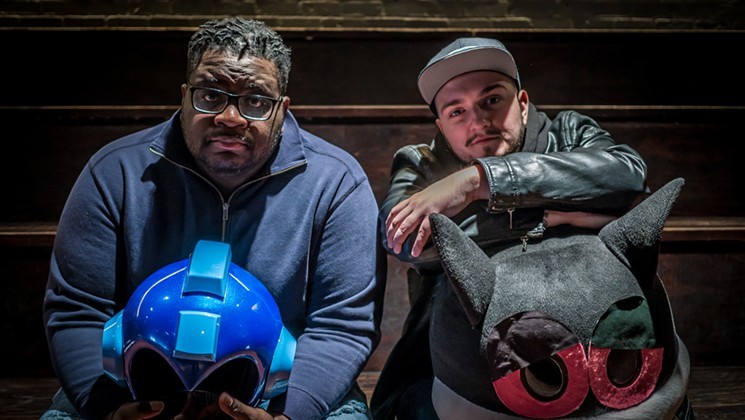 Mega Ran (left) and Bag of Tricks Cat (right).
Luis Perez
Trixie Mattel
Friday, June 22
The Van Buren
The most recent inductee into RuPaul's Drag Race Hall of Fame is coming to downtown Phoenix, and she won't be lip-syncing for her life. Instead, the co-star of Vice's The Trixie & Katya Show, Trixie Mattel will be performing her original country music.

She's scheduled to perform at The Van Buren on Friday, June 22. The stop is one of 39 shows that Mattel's Now With Parts North American tour that is in support of her second studio album, One Stone. Mattel self-released the album in March and it debuted at No. 1 on Billboard's Heatseekers charts.

Mattel has been lauded as a versatile performer and has one of the best careers post-Drag Race. From March 2016 to November 2017, she starred in a YouTube talk show called UnHhhhh with fellow Drag Race contestant Katya. The show was picked up by and re-branded for their cable program The Trixie & Katya Show. Tanner Stechnij

Local hip-hop artists Mega Ran and Bag of Tricks Cat hope their newest collaboration, the recently released Emerald Knights 2, falls into the first category. And they’ve got every reason to believe so, considering the critical and commercial success of the album’s predecessor, 2015’s Emerald Knights.

Decide for yourself when Ran and Cat perform tracks off the album at the Monarch Theatre, 122 East Washington Street, on Friday, June 22. Doors open at 8 p.m. The Grind, Yosh, Justus and Roqy TyRaiD will open. Tickets are $10. Benjamin Leatherman

New Zealand-born roots reggae band Katchafire.
Courtesy of Katchafire
Gillian Welch
Friday, June 22
Orpheum Theatre
Like Uncle Tupelo, Gillian Welch sings imagined first-person accounts of some of America's least wanted. The first song on her first album is called "Orphan Girl." Pretty much every song sounds like a John Steinbeck novel put to music and features sparse accompaniment. Welch's music is rewarding and powerful, but not the kind of thing to listen to on a first date. Time: The Revelator is the best of her albums; Soul Journey is the only one that rocks a little. Mark Sanders

Kenny Chesney tends to attract a crowd everywhere he performs.
Allister Ann
Phoenix Afrobeat Orchestra
Friday, June 22
Last Exit Live
You know when you hear a song and you can't help but react? The bass syncs up with your hips, and the drums seem to tell your feet exactly when to move. Pretty much every single one of the songs by Phoenix Afrobeat Orchestra (charmingly known as PAO by fans) holds this power to make you move. And we mean move. We dare you to sit still while this 15-piece orchestra does its jazzy thing, and singer Camille Sledge demonstrates the actual definition of funk. energy alone is contagious enough to get out of your chair and onto the dance floor. Just give in, and let PAO's rhythm move you. Phoenix New Times

Singer-songwriter Gillian Welch.
Paxton X
Downtown Chamber Series
Friday, June 22, to Sunday 24
Legend City Studios
Think the summertime is a dead period for classical music? Try telling that to the musicians of the Downtown Chamber Series. While it’s certainly true that most local orchestras and chamber ensembles generally take a hiatus from performing during the hottest months of the year, the folks who perform with the DCS, which is made up of a rotating lineup of local musicians, stage concerts even when it’s boiling outside.

Such shows typically take place inside urban galleries and art spaces around downtown Phoenix. This weekend's concerts will happen inside Legend City Studios and include performances of all 10 of Beethoven's glorious sonatas over three nights. Pianist Paula Fan and Phoenix Symphony concertmaster Steven Moeckel will be the featured guest performers. Each concert starts at 7:30 p.m. and admission is $10. Check out the DCS website for more info. Benjamin Leatherman