Why let the NCAA have all the fun? Tom Carlson
March means college basketball, filling out your brackets, and cheering on your teams.

We thought we’d get in on the fun.

Presenting Phoenix Music Madness, where you can vote for the best local band in the Valley.

Sixteen local bands clash head-to-head, and the band with the most votes progresses to the next round until we get to the Phoenix Phinal Phour.

Vote in the poll below for your favorite band in each matchup. Vote early and vote often! Start an office pool!
Like bracket, ours is filled with intrigue. Who can challenge veteran No. 1 seeds Bear Ghost and Fairy Bones? Which Cinderella band stands a chance against scene faves like decker. and Harrison Fjord? Who will win the PRO TEENS vs. Jerusafunk battle, the coy indie rockers or the  funk-maniacs?

The Phinal Phour will battle it out at a free concert at Rebel Lounge on Wednesday, March 29.

Voting for the first round ends at noon on Tuesday, March 14.

P.S.: Please only vote once per day. We have top people working around the clock to ensure no one stuffs the ballot, at least not too much. 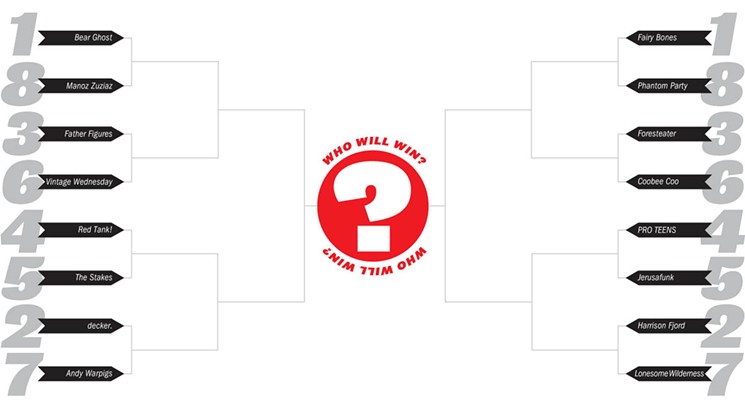 Start an office pool!
Tom Carlson
KEEP PHOENIX NEW TIMES FREE... Since we started Phoenix New Times, it has been defined as the free, independent voice of Phoenix, and we'd like to keep it that way. With local media under siege, it's more important than ever for us to rally support behind funding our local journalism. You can help by participating in our "I Support" program, allowing us to keep offering readers access to our incisive coverage of local news, food and culture with no paywalls.
Make a one-time donation today for as little as $1.