The author with his trusty bass and some of his paintings. Steve Davis will read from his new book on August 22. Mark Silverstein

In September 2018, Steve “Stevie D” Davis was given three months to live due to liver cancer.

After the diagnosis, the longtime Phoenix musician, painter, and now author decided to go on living his life with the same positive attitude he has been sharing with those around him him for decades. Almost two years later, Davis still has stage 4 cancer, but he's alive and kicking, and on Saturday, August 22, he'll be doing a live Zoom reading to celebrate the release of his new book, The Unexpectedly Long Life of Stevie D.

“The book came about because there seemed to be more than just [my] stories. I’d written a lot of haiku. It was entertaining, you know, for my own amusement, and there were the paintings. I took some of my favorite ones, including some that I’ve sold already,” says Davis.

Davis is well known among the punk community in Phoenix for his work with notable bands Glass Heroes and US Bombs, though he currently fronts Stevie and the Sleaze. He also has a new CD coming out that is a collaboration with his friend, valley musician Robert Shipp called Live to Tell on Onus Records.

While writing isn't something that Davis has been pursuing professionally, it's something he's been working on, off and on, for about 15 years now, even though he didn’t exactly realize he was laying the foundation for a book.

The book is composed of just over 20 autobiographical essays and musings that touch on stories of his often-misspent youth and adulthood, as well as haiku, longer-form poetry, and photos of Davis’ graffiti-esque paintings which bear more than a passing resemblance to the work of the late Jean-Michel Basquiat. (Fortunately, Davis had professional photographs taken of his paintings before he sold them, so he had images to use for The Unexpectedly Long Life of Stevie D long before he knew he'd write a book.)

In short, there is a little something for everyone in the book and Davis, who is a natural storyteller, certainly seems proud to get his words and images out there for everyone to see. 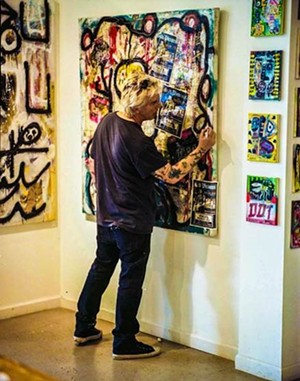 Phoenix punk rock legend Steve Davis puts the finishing touches on a piece of his artwork.
Dan Bonner
“[Writing] more or less was therapeutic for me as a flotation device. [It] gave me something to cling onto. I just kept writing more," Davis says.

For Davis' publishers at Tucson’s R&R Press, working with the musician was something of a no-brainer.

Maggie Rawling Smith of R&R says, “Steve is one of the most relentlessly positive and kind people I have ever met. Whatever life experiences helped shape him into that person are worth sharing. [R&R Press partner and writer] Brian [Jabas Smith] met Steve when he was 16. Later, he penned an article on hepatitis C and Steve’s fight with the disease. Steve’s good attitude and fearless response to that terminal diagnosis 20 years ago will be examined in an essay he is penning for our inaugural R&R Press Literary Journal, out February 2021.”

Davis says, "Brian and Maggie, they knew that I had written and just hadn’t got it out. They encouraged me to do it.”

The musician has enjoyed the process of putting out the book, he says.

“For me, the people who have been coming forward to help make this work has been such a wonderful thing. Whether it is contributing a picture or writing something for me. Things I never thought about ... Just trying to figure out what picture to use for the cover or thinking about the layout of the cover itself. Everything has been fun for me,” says Davis.

Steve Davis will read from The Unexpectedly Long Life of Stevie D at 7 p.m. on Saturday, August 22. You can access his Zoom reading here. The password for the Zoom meeting is 8Ekc0F. For more information regarding the book, click here.
KEEP PHOENIX NEW TIMES FREE... Since we started Phoenix New Times, it has been defined as the free, independent voice of Phoenix, and we'd like to keep it that way. With local media under siege, it's more important than ever for us to rally support behind funding our local journalism. You can help by participating in our "I Support" program, allowing us to keep offering readers access to our incisive coverage of local news, food and culture with no paywalls.
Make a one-time donation today for as little as $1.