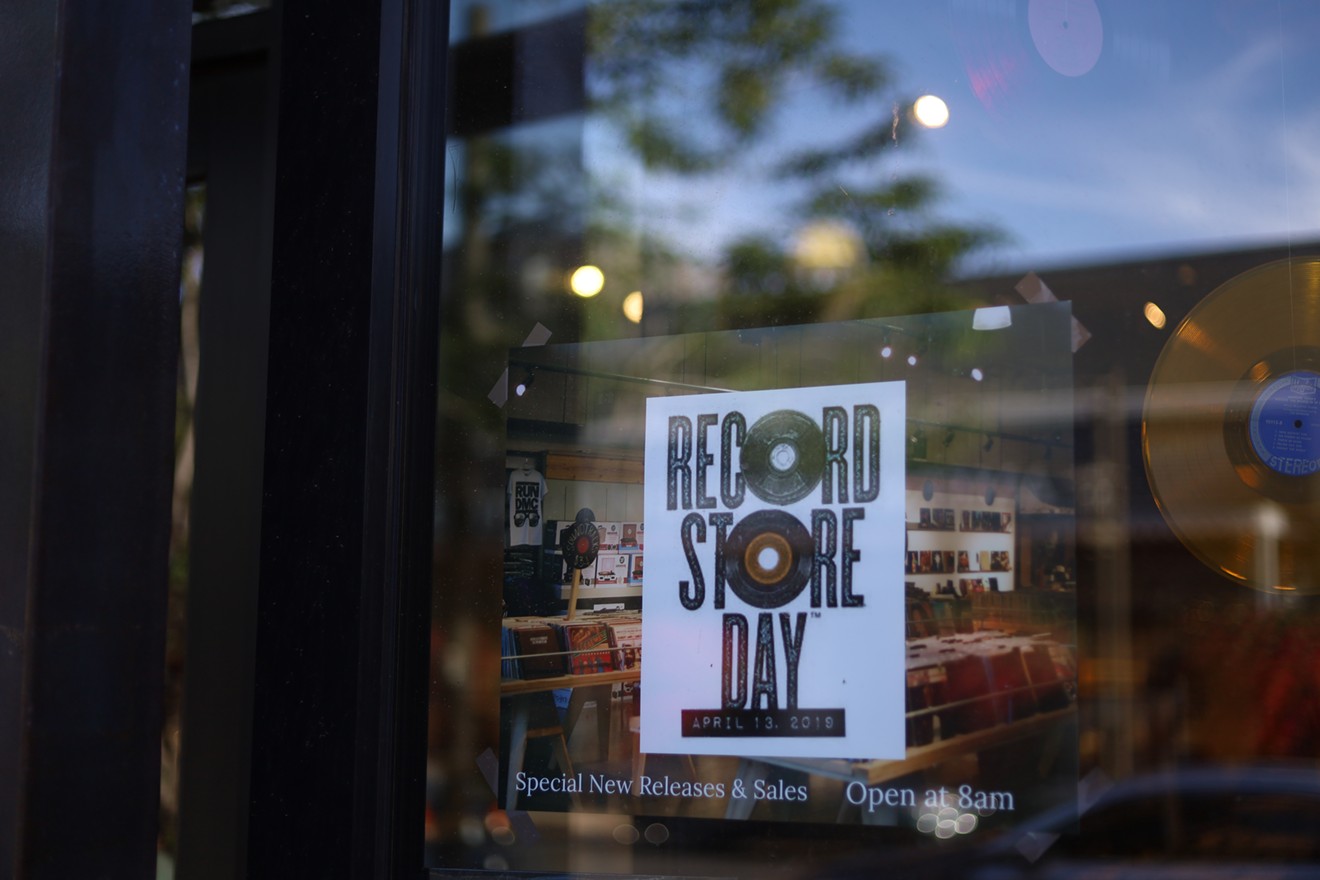 Record Store Day 2019 is upon us. Julian Hernandez
Every year, vinyl collectors impatiently wait for the official Record Store Day list of releases to be posted so they can start crafting their plan of attack. But many know that heading out to the record shops with a grocery list is truly a fool's errand. You never know what you're going to walk out of the store with.

Each record store in the Valley likes to celebrate Record Store Day in their own way, and some prefer not to participate at all. Not every record shop will carry releases from the official Record Store Day list, while others prefer to unload a large collection of records stockpiled just for the occasion. Some shops put together a day full of activities with live music, DJs, and record signing events. Before you head out on your vinyl collection journey, check out our guide to see what each record shop in The Valley has planned for Record Store Day 2019.

Stinkweeds
12 West Camelback Road
9 a.m. to 8 p.m.
The central Phoenix record shop is always a must-stop for Record Store Day. Stinkweeds is kicking off the day early at 9 a.m. and is sure to be packed for RSD 2019. Live music is planned, with multiple DJs and musicians coming in for performances, including Phoenix's MRCH and Calvin Johnson of the famed indie pop group Beat Happening. The Short Leash Hot Dogs/KJZZ Soundbite mobile production truck will be there to serve up food and help put on a show for the crowd.

Stinkweeds is also coming in strong with hundreds of RSD releases as well as plenty of limited-edition vinyl out on the floor. Since Stinkweeds is one of the smaller record shops in the area, it might be wise to head there early if you want to beat the crowds and have a little breathing room.

Pink Elephant Records
2240 North Scottsdale Road Suite 1B, Tempe
11 a.m. to 10 p.m.
For smaller and younger record shops, it can be a difficult process getting official Record Store Day releases. While Pink Elephant won't be carrying any of the releases from the RSD 2019 list, the recently opened record shop is hosting its own event with local bands (lineup TBD) coming in for album signings and extra displays of new and used records. Food will be available for hungry vinyl collectors and for veg-heads, Green Vegetarian is just a few steps away.

Grace Records
2200 East Williams Field Road, #112, Gilbert
8 a.m. to 9 p.m.
The Gilbert record shop known for its wide selection of affordable used records is going all out for RSD 2019. Grace Records is opening up two hours early for RSD 2019, making it one of the first shops in the Valley to open its doors for Record Store Day. There will also be doughnuts for the earliest shoppers to help jump-start the crate-digging.

Grace will be stocked with over 200 Record Store Day releases and a large selection of RSD 2019 merchandise including T-shirts and tote bags. The Gilbert record shop will also be carrying the RSD 2019 exclusive Crosley 3" turntable that was previously exclusive to Japan. The tiny Crosley plays records that hold about four minutes of audio and has a headphone jack for maximum portability. Of course, 3" records such as the Foo Fighters' "Big Me," The Raconteurs' "Store Bought Bones," and multiple singles from Epitaph Records will be available for purchase.

Zia locations Valleywide will have plenty of deals and exclusives on RSD 2019.
Michelle Sasonov
Zia Records
Multiple Locations
The local music chain is known for going all out with its Record Store Day events, and this year is no different. Across the many locations here in the Valley, Zia Records will be hosting live DJs to keep the festive atmosphere going. For the young and young at heart, make sure you grab a balloon on your way out. Zia has partnered with Boys and Girls Club here in Arizona, and all of the proceeds from their Zia swag bag, complete with a T-shirt and a flexi disc compilation, will go toward supporting their mission here in the state.

Zia will be carrying hundreds of Record Store Day releases as well as plenty of merchandise. A complete list of all releases carried by Zia Record Exchange across all of their stores can be found here.

Record High
4242 East University Drive
9 a.m. to 5 p.m.
The audiophile record shop won't be carrying any official 2019 Record Store Day releases, but it will be opening an hour earlier than usual and have a special selection for vinyl lovers. Each year, Record High stocks its displays with about 1,000 used, audiophile-quality records for those who require only the best vinyl has to offer.

Once you're done shopping around and have a great haul from all of the other record shops you've visited throughout the day, make sure you stop at Record High to have them professionally cleaned. For a small fee, Record High will clean your vinyl records and place them in a new protective inner sleeve so you can toss out those cheap paper sleeves that do your collection no good.

The Record Room
2601 West Dunlap Avenue, #21
10 a.m. to 7 p.m. (No hard close time set)
If you're looking for deals on Saturday, The Record Room is going to be your best best. The Phoenix shop will have every item in the shop marked 20 percent off. While it won't be carrying any official Record Store Day releases, a huge collection of used records will be added to the displays it's been preparing all year. A few local vendors and records collectors will also have their own collections for sale, with some specializing in used punk, blues, and country records.

Local Arizona bands will be performing throughout the day including surf rockers The Apaches, punk rockers Puppy and The Handjobs, and the experimental jazz and lounge group Moonlight Magic. Local DJs will also be spinning tracks to set the perfect vinyl-browsing mood.

The 'In' Groove
3420 East Thomas Road
8 a.m. to 9 p.m.
With an 8 a.m. opening time, The 'In' Groove will certainly be one of the first record shops to open on Saturday. The Phoenix record shop will carry a large amount of official Record Store Day releases which, combined with its already massive collection of new and used vinyl, will make it a great stop for hours of browsing.

If you absolutely cannot wait a single second longer for Record Store Day 2019 to arrive, Asylum Records will be there for you at 7 a.m., making it the first shop in metro Phoenix to open for the day. Asylum Records will be carrying hundreds of official Record Store Day releases and will also be hosting a Funko swap meet for fans of the large-headed collectibles. The swap meet begins at 10 a.m.

Asylum Records will also be hosting a signing event with various rock musicians including Michael Bruce and Neal Smith from the original Alice Cooper Band; Tim Gains, the former bassist of the Christian metal band Stryper; Eric "A.K." Knutson, the vocalist of the Arizona metal band Flotsam and Jetsam; and Bret Kaiser, the vocalist of the metal band Madam X. The signing event will begin at 11 a.m. and items will be available for the event including a limited print. For a full list of what can and can't be signed, contact Asylum Records.

Mojave Coffee and Records won't be carrying any official Record Store Day releases, but the shop will be having a 15 percent off sale on its available selection. With a smaller and more limited space and selection, Mojave won't be at the top of the list for those who are interested in serious digging, but it will provide a wonderful place to enjoy some fine coffee and relax in between your frantic shopping sprees.
KEEP PHOENIX NEW TIMES FREE... Since we started Phoenix New Times, it has been defined as the free, independent voice of Phoenix, and we'd like to keep it that way. With local media under siege, it's more important than ever for us to rally support behind funding our local journalism. You can help by participating in our "I Support" program, allowing us to keep offering readers access to our incisive coverage of local news, food and culture with no paywalls.
Make a one-time donation today for as little as $1.
Julian Hernandez