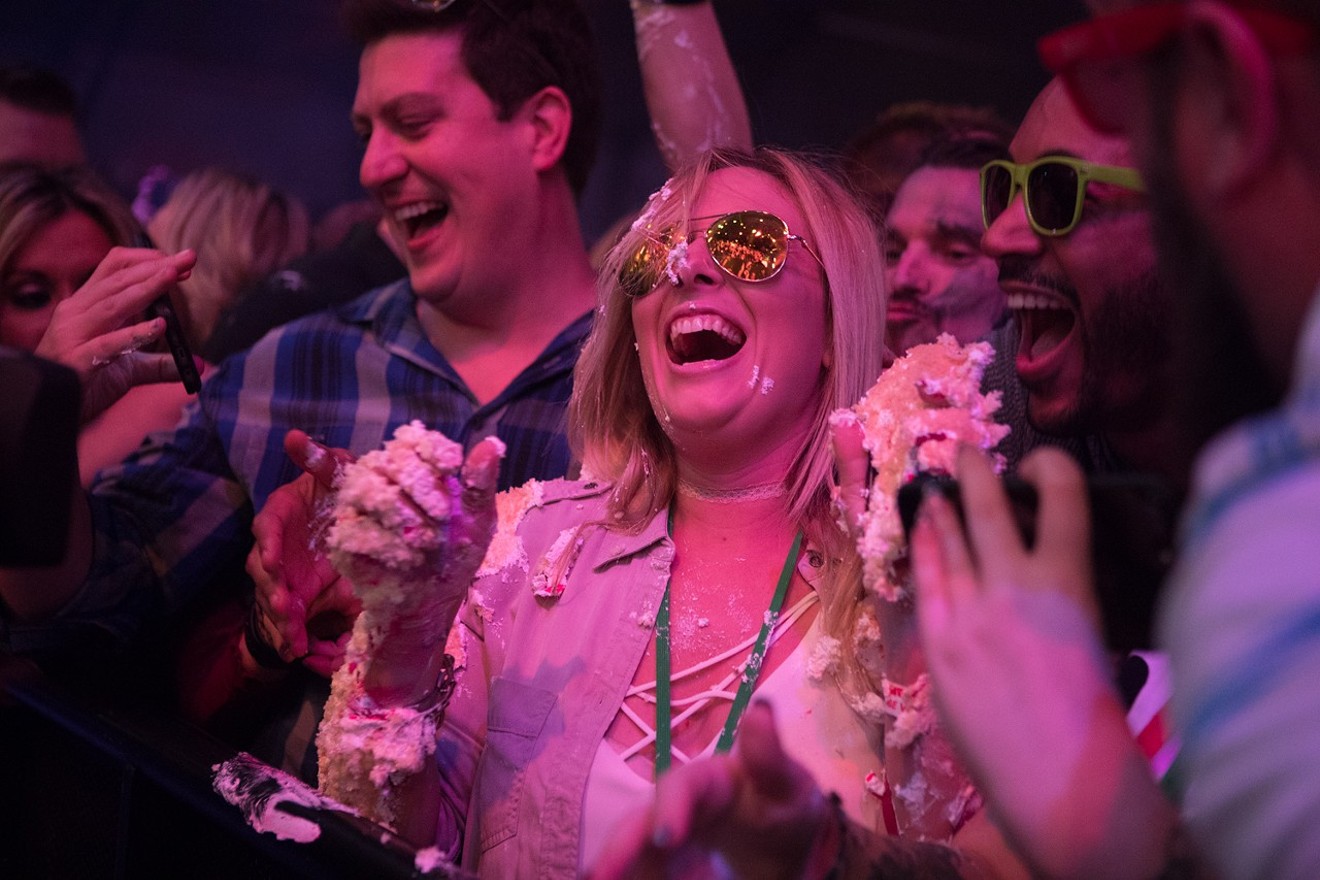 The Coors Light Birds Nest is the beating heart of the black sheep of all golf tournaments, the Waste Management Phoenix Open. This year, headliners like Jake Owen with Chase Rice, Toby Keith, the Band Perry, Kaskade, and Flo Rida performed to sold-out crowds over the course of three nights.

We decided to trek through the excessive (but welcome) signage and metal gates that mapped the worn-out grounds of the Tournament Players Club in north Scottsdale for the fourth and final night of Birds Nest debauchery, headlined by Blink-182 and Steve Aoki. We walked alongside the leftover binge-drinkers from the day's events, middle-aged men excited to get their kicks, and fancy-looking Scottsdalians who left their mountainside dwellings for a night to show off their designer rags.

Here are the best and worst things that we saw.

Jim Louvau
BEST  — Blink-182 Die-Hards
The crowd at the show was definitely more of a party vibe than a "we love music" vibe, but a handful of true Blink-182 fans were scattered throughout the event and geared-up in old concert T-shirts and hoodies.


BEST — VIP Section
I'm not usually one who's into paying for VIP at shows; most of the time, it feels like a waste of money. the VIP section at the Open was completely legit. Free drinks, legit snacks (not any carnival food garbage), optimum viewing area, hookah lounge, and upgraded bathrooms.

WORST/BEST — Steve Aoki’s Set
For entertainment value, Aoki's set excelled. He played a diverse selection of music which fit the incredibly diverse crowd of the event. He played a mash-up of Daft Punk's "One More Time" and his own "Turbulence," and played songs from Nirvana and the White Stripes. He played crowd favorites like Diplo's "Freak," Ace Hood's "Bugatti" and Valentino Khan's "Deep Down Low," then played some of his classics like his remix of Kid Cudi's "Pursuit of Happiness" and "No Beef" featuring Afrojack. Toward the end of his set, he said, "This one goes out to all the emo kids out there" and played My Chemical Romance's "Welcome to the Black Parade." Prior to that, Aoki played Celine Dion's "My Heart Will Go On," accompanied visuals of himself as Jack and Rose on the Titanic. Along the lines of entertainment, Aoki took his shirt off, jumped around a lot, and did things like take selfies with the crowd, pull people on stage, throw cake at the crowd, and spray the people with confetti. That said, if you're not into Aoki's antics, you could question what the point of it all was.

BEST — People Who Got "Caked"
This is something that Aoki does at all or most of his shows, and people love it. He gives a warning before he does it, and people that want to be caked are directed to make themselves known. 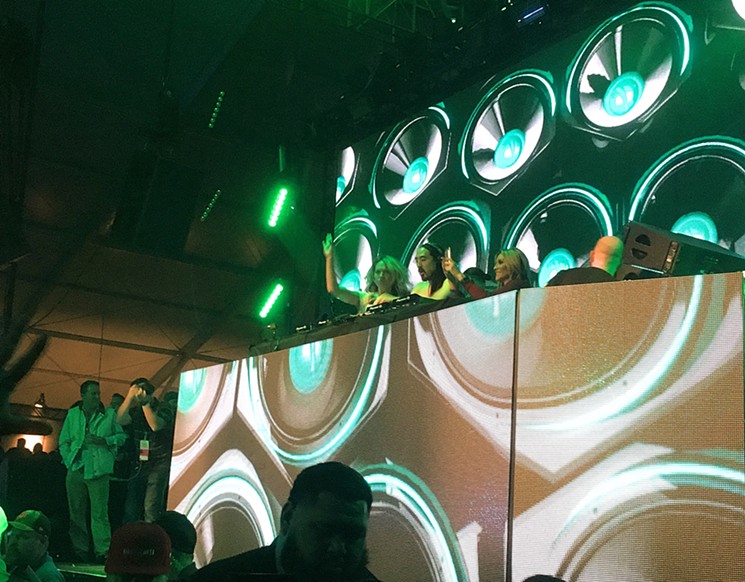 WORST — Girl Snapping The Entire Time She Was On Stage
At one point Aoki had girls pulled from each of the areas surrounding the stage. He pointed to one guy and said: "Choose the most beautiful and crazy girl here."

BEST — Blink-182’s Lady Roadie
You don't see many female roadies setting up before the show. It's especially nice to see in Trump's America.

Blink-182
Jim Louvau
BEST — Blink-182's Set
Blink-182's set was a classic demonstration of how to put on a show. It's all about balance, and they found a way to orchestrate authenticity, entertainment, crowd engagement, music quality, and juggling a multigenerational fan base. They opened with "Feeling This" and "What's My Age Again." They addressed the crowd here and there, but focused on getting all of their hits, fan favorites, and new tracks out. During the set, Steve Aoki came on stage to shout and hype the crowd into " Date," Travis Barker did a drum solo before the band went into playing "Violence," Mark Hoppus drew on newcomer/Tom Delonge replacement Matt Skiba's face with a sharpie while he tried to sing "Dysentery Gary," and the band played "Happy Holidays You Bastard" completely in the dark.

Jim Louvau
BEST — Most Things Blink-182 Bassist Mark Hoppus Said While Addressing The Crowd
some of the highlights:
"Who's been drunk since 6 a.m.? Stay hydrated, watch yourself, here's a new one."
" Scottsdale, Phoenix, Tempe, and other incorporated areas."
"Tonight, I brought two condoms, in case I get a hole in one."

BEST — Overall Bar Layout and Organization
After walking through a long line and inflatable pillars, it seemed like Old Town had temporarily been miniaturized and transported to the event. The entrance and bar area were completely outside, with tents brought to you by El Hefe, Absolut, and Coors. There were probably 30-plus cashiers/bartenders, which made the foot traffic flow. There was a DJ outside the main tent who played in between headlining sets, and there TVs set up at the bars that were live streaming from the main stage.