Sedona-Based Chapman Stick Master Shares the Story Behind His Songs 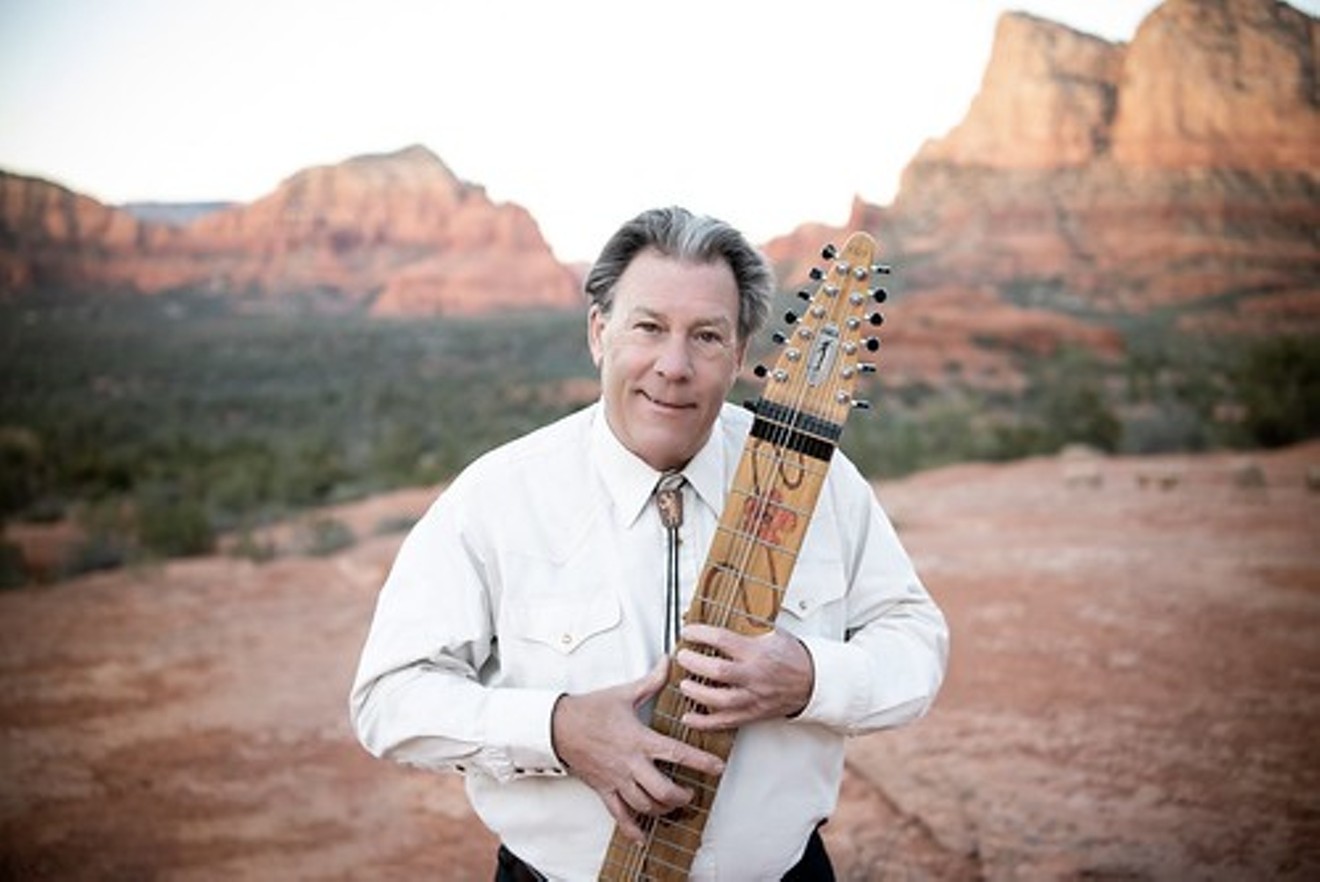 Chapman Stick expert Michael Kollwitz holds his instrument near his home in Sedona. Lisa Garrett
The oldest instruments known to man is the flute. We can go back roughly 40,000 years with the early flutes made of bone. Imagine that for a second. Forty-thousand years. Over 1,300 generations of people, if you do the math, have played instruments of some kind or another.

Why do you need to know this? You don’t really, unless you want to know how the flute evolved and eventually became the not-so-secret weapon of legendary (and fictional) San Diego anchorman Ron Burgundy. What’s important here is that all musical instruments came from somewhere. We are lucky to live in a town that is home to the Musical Instrument Museum (MIM) in Phoenix, where you can find out about the history of many different types of instruments.

Arizona is also home to Michael Kollwitz. The Sedona man is one of the world’s most prolific players of the Chapman Stick, which is a mere infant in comparison to the flute. At under 50 years old, the Chapman Stick is an incredible instrument, and when in the hands of someone like Kollwitz, it creates a sound like nothing else.

This little-known stringed instrument is capable of a wide range of sound. With 10 or 12 individually tuned strings and a specialized pickup created specifically for the Stick, it is capable of playing almost anything played by a guitar or bass simultaneously. Chapman Stick players can and do use chords while creating an often-mesmerizing textural sound on the instrument.

Well, it wasn’t a bassline at all. It was the Chapman Stick.

The late Emmett Chapman, a notable jazz musician, created the Chapman Stick. He also was credited with creating a unique two-handed tapping technique for guitar and bass in the late 1960s before building his first “Stick,” as it was often referred to in the early 1970s. Chapman sold his first one in 1974 and went into business for himself selling his invention. In 1976, a 19-year-old Kollwitz, who was a reformed trumpet player living in Southern California at the time, saw an ad for the Chapman Stick and was immediately intrigued. 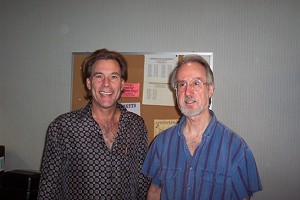 Michael Kollwitz (left) and Emmett Chapman, inventor of the Chapman Stick, in 2005.
Courtesy of Michael Kollwitz
“This was before the internet, so I immediately dashed off a letter and asked for more information [about the Chapman Stick]. That’s how I met the Chapmans. I was living in Riverside, California, and it just so happened Emmett came and was the solo opening act at a little coffeehouse performance at UC Riverside. I was sitting in the front row, and I was awestruck, speechless. I just sat there with my mouth open, and I couldn’t believe all the music this one guy did with this weird-looking instrument,” says Kollwitz in a recent Phoenix New Times interview.

After the show, Kollwitz met Chapman, and a long friendship and mentorship began. Chapman allowed Kollwitz to play the Stick and, as Kollwitz states, “All I could think about was the Stick.” A few months later, Kollwitz bought one of the early Chapman Sticks for $700. In 2022 money, this would put stick at something close $3,500, which is a sizable investment for any 19-year-old.

“I drove to the top of Laurel Canyon, which was where [Chapman] was living at the time. After we made the transaction, he asked me if I would like to take a lesson. Three hours later, my head felt like it was going to explode,” remembers Kollwitz.

It was interesting to speak with him about the learning curve the instrument brings for different players. Because of his trumpet background, Kollwitz faced the challenge of bringing a second hand into the fold when playing the Chapman Stick. Depending on the background of those brave enough to try the Stick, which requires two very active hands, different challenges may be met. Being a unique instrument, it seems that everyone approaches and plays the Chapman Stick a bit differently.

“All the Stick players I’ve ever met and heard, no two sound alike. It’s kind of like if you were a painter and were handed a palette of 100 new colors, you know? You’re going to go crazy, and the Stick can be utilized in any kind of music,” says Kollwitz.

For Kollwitz, who has over 25 albums under his belt at this point, the drive to continue learning and growing as a Chapman Stick player continues. Currently, he performs multiple times per month in and around the Sedona area, where he lives, and recently played for the Sedona City Council. Several of Kollwitz’s records have been successful in the New Age genre, and he has had his music played all over the world.

“I came out with a CD titled Serenity in 2017. It was all original stuff. I didn’t know if anyone would even listen to it, but I found a promoter and talked with them and they said, ‘There is a genre for you. It’s called contemporary instrumental or, sometimes, New Age.’ By the end of that year, my music was being played in 20 countries. The CD got a big [award] nomination in Europe, and the next thing I know, I’m getting interviewed by people in Europe, Australia. It was unbelievable,” says Kollwitz.

Check out michaelkollwitz.com for more information on this inspiring and engaging artist who is helping make the Arizona musical spectrum that much more colorful. To find out more about the compelling instrument, visit stick.com, the home of the Chapman Stick. Sadly, Emmett Chapman passed away on November 1, 2021, at the age of 85, but his daughter, Grace, continues to make the instrument to her father’s standards today.
KEEP PHOENIX NEW TIMES FREE... Since we started Phoenix New Times, it has been defined as the free, independent voice of Phoenix, and we'd like to keep it that way. With local media under siege, it's more important than ever for us to rally support behind funding our local journalism. You can help by participating in our "I Support" program, allowing us to keep offering readers access to our incisive coverage of local news, food and culture with no paywalls.
Make a one-time donation today for as little as $1.