Shady Park in Tempe Has Resumed Music Events, and We Measured the Decibel Levels

The exterior of Shady Park in Tempe. Mirabella at ASU is in the background. Benjamin Leatherman
click to enlarge 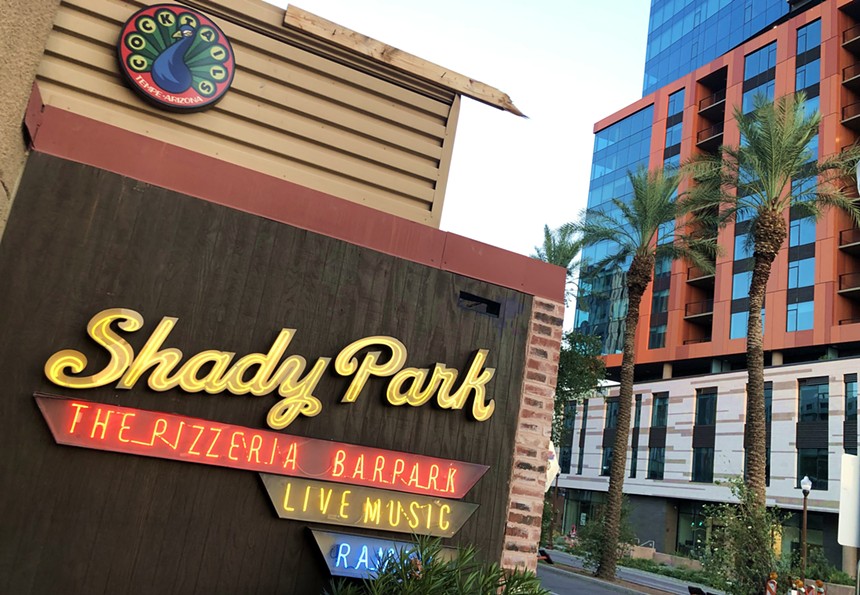 The exterior of Shady Park in Tempe. Mirabella at ASU is in the background.
Benjamin Leatherman
Beats and bass are flowing at Shady Park once again as the Tempe bar, restaurant, and venue has reopened and resumed music events after temporarily shutting down for more than two months to install a step-pyramid roof and other sound-reduction measures on its outdoor patio.

The nightlife hotspot located at 26 East University Drive began hosting DJs again on Friday, September 10, with a performance by electronic dance music producer Martin Ikin that was attended by more than 150 people.

Shady Park pressed pause on its shows on July 7 after a controversy over noise complaints from residents of Mirabella at ASU, the 20-story senior adult apartment building and “intergenerational community” located across University Drive from the venue. As Phoenix New Times has previously reported, the issue first emerged in June.

According to a statement by Shady Park posted to its social media in early July, it halted operations to build the step-pyramid roofing and other sound-reducing measures on its rear patio (where music events have taken place) in hopes of “[making] our neighbors happy.”


(New Times was unable to reach a Shady Park spokesperson for comment on the matter.)

The step-pyramid structure over Shady Park's outdoor patio.
Benjamin Leatherman
The project, which was described in a building permit filed with the city of Tempe as a “sound control canopy over open patio,” cost an estimated $100,000 to construct. Other improvements were made to the outdoor patio under the new setup, including the installation of larger LED screens behind the stage.

So how much noise is reduced by the improvements? Phoenix New Times measured the sound levels using the iOS version of the Decibel X:dB app at various locations outside of Shady Park during its EDM events on the evening of Saturday, September 11, and the afternoon of Sunday, September 12.

Using criteria listed in Tempe’s municipal code for noise issues – including observing a sound level meter for several five-second periods over the course of 15 minutes and then calculating the average measurement – we measured sound levels from the sidewalk in front of Shady Park and across the street at Mirabella’s front entrance.

The sound levels in front of Shady Park were an average of 54.8 decibels on Saturday night and 63.8 decibels on Sunday afternoon. Both were within Tempe’s legal limit of 55 decibels and 65 decibels, respectively, for commercial businesses. (By comparison, nightclubs located along Mill Avenue in downtown Tempe were measured as loud as 86.2 decibels from their front entrances by New Times on Saturday night.)

The noise levels were even less from Mirabella’s front entrance, measuring 53.7 decibels on Saturday and 62.1 on Sunday.

Calls to Mirabella for comment on Shady Park’s new roofing and sound-reduction measures were not returned. A statement from a Mirabella spokesperson to local radio station KJZZ from early September read in part: “We’re optimistic that the long-planned sound control canopy being installed at Shady Park will keep noise from exceeding the city’s established standard.”
KEEP PHOENIX NEW TIMES FREE... Since we started Phoenix New Times, it has been defined as the free, independent voice of Phoenix, and we'd like to keep it that way. With local media under siege, it's more important than ever for us to rally support behind funding our local journalism. You can help by participating in our "I Support" program, allowing us to keep offering readers access to our incisive coverage of local news, food and culture with no paywalls.
Make a one-time donation today for as little as $1.