Shopping on Wicked Humor and the Artistic Impact of Conservatism 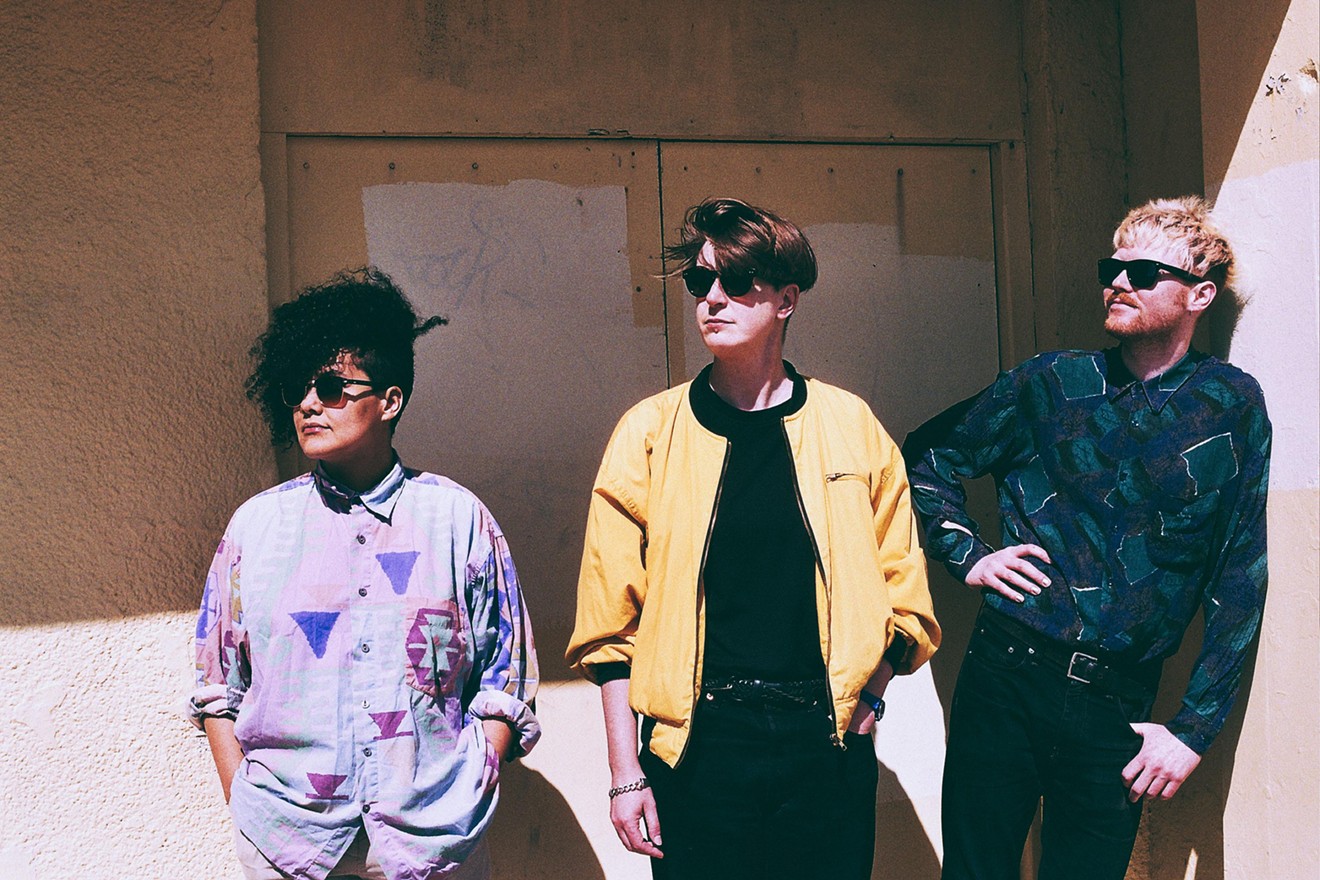 Shopping want to make you dance inside and out Steve Glashier
In recent years, bands across the U.S. and U.K. have been adopting the ghostly vocals, fuzzy production values, and barbed guitar sounds that defined a generation of underground post-punk groups like The Chameleons and The Sound.

The trio Shopping are one of the most exciting bands carrying that sound into the 21st century. But they’re taking cues from a different playbook.

Shopping aren’t interested in sounding like they rehearse in the Batcave. Guitarist Rachel Aggs, bassist Billy Easter, and drummer Andrew Milk tap into the funkier and playful side of post-punk. They’re the latest link in a chain of post-punk bands that includes Gang of Four, Delta 5, The Slits, and X-Ray Spex — groups that favored gang vocals, dancey rhythms, and politically conscious lyrics that mocked consumerism and political conservatism.

That radical streak isn’t confined to the band's music. The trio have been a part of London and Glasgow’s DIY scenes for years, and maintain an egalitarian work ethic where all three members are equally invested and involved in writing Shopping’s songs.

Shopping are currently touring the U.S. to support their third album, The Official Body (produced by Edwyn Collins of Orange Juice). Phoenix New Times caught up with the band to talk about dancing, politics, the difference between U.S. and U.K. audiences, and the meaning behind the title of their catchy new record.

New Times: You’ve toured through the U.S. a couple of times already. I was wondering if you’ve noticed any difference in the way American audiences respond to your music versus how your work is received back home in the U.K?
Rachel Aggs: It’s really exciting how into our music people are here. The U.K.’s constantly being flooded with bands coming over from the U.S. and from all over the world all the time, so the audiences there are kind of spoiled for choice. We’ve had some great shows in the U.K., but there’s something about coming here and traveling all over and people going long distances just to come see us that’s really exciting. They come up and they tell us they’ve driven for hours to see us. There’s just a really high level of enthusiasm here.

Billy Easter: People get more excited about seeing a band if they don’t know when the band is going to come back; you’re going to be more stoked to see them. Back home, we play more often, so people are like, "Oh, I’ll see them some other time."

So many of your songs have a wiry, dancey energy to them. Is it important to you that people respond to that energy in a physical way? Do you want to see your audiences dancing their faces off to your music?
Aggs: It’s more fun for us, obviously, and for them! If people are affected by our music to the point that they dance, then the show is always way better. It can be difficult playing our music to a totally stationary audience because we really go for it. And it can feel really weird to be really going for it while the audience is standing still.

Easter: We also appreciate that people respond to our music differently. Some people are dancing on the inside.

Shopping seems to be part of a tradition of English bands that fuse deep political concerns and lyrics with energetic dance music. In the U.S., it’s a bit more rare to see a band get their dance on and get political at the same time. What is it about the cultural climate in the U.K. that encourages these kind of bands? Groups like Gang of Four, The Slits, y’all...
Aggs: We just don’t know how to have a good time. [Laughs] That’s interesting. I never really thought about it. I mean, historically, there’s political climates that produced a lot of that music in the '70s and '80s. So much music came out of being ruled by a conservative government that were ignoring a lot of people. We’re kinda in a similar place now.

Easter: We have to think about this question.

Aggs: It’s weird, cause we’re from the U.K. and when you’re from somewhere you don’t really notice what it is that causes certain things to happen.

What does the title of your record mean? What are you trying to evoke with that phrase The Official Body?
Aggs: It’s a multifaceted title. It’s a comment upon the myth of doing things the right way, the correct way — red tape and bureaucracy. And it’s also a comment on physical bodies, human bodies, and what we’re told is the "correct," "beautiful" body to have … It’s quite sinister, though, the whole concept of an official body for anything. As is any view of anything being the right way or the perfect way — the thing to aspire to be.

Andrew Milk: I also think that the sound of that phrase is quite tongue-in-cheek, which links back to the way we make music. Which is political in nature but also fun. I think The Official Body having that kind of double meaning is a bit funny in a a very British kind of '70s sitcom way. “The Official Body.”

Milk: It’s ridiculous and hilarious, the notion of an official body, but it’s also sort of sinister and dark. Which ties into our album cover, with the picture of the inflatable crocodile body casting a shadow on the bottom of the pool. It’s a ridiculous-looking body, but it’s also quite sinister.

Aggs: It’s got that evil grin going on … I hope that explains it. I feel like we should have refined that answer. Sometimes when I’m falling asleep I get my most creative juices flowing and I struck upon it recently: “I know how to say really concisely what the name of our album is all about!” And now I’ve lost it, obviously.

Shopping are scheduled to perform at The Rebel Lounge on Saturday, March 17. Paper Foxes and French Vanilla are slated to open. Tickets are $10 to $12.