The Sweet Give the U.S. a Wink with Steve Priest 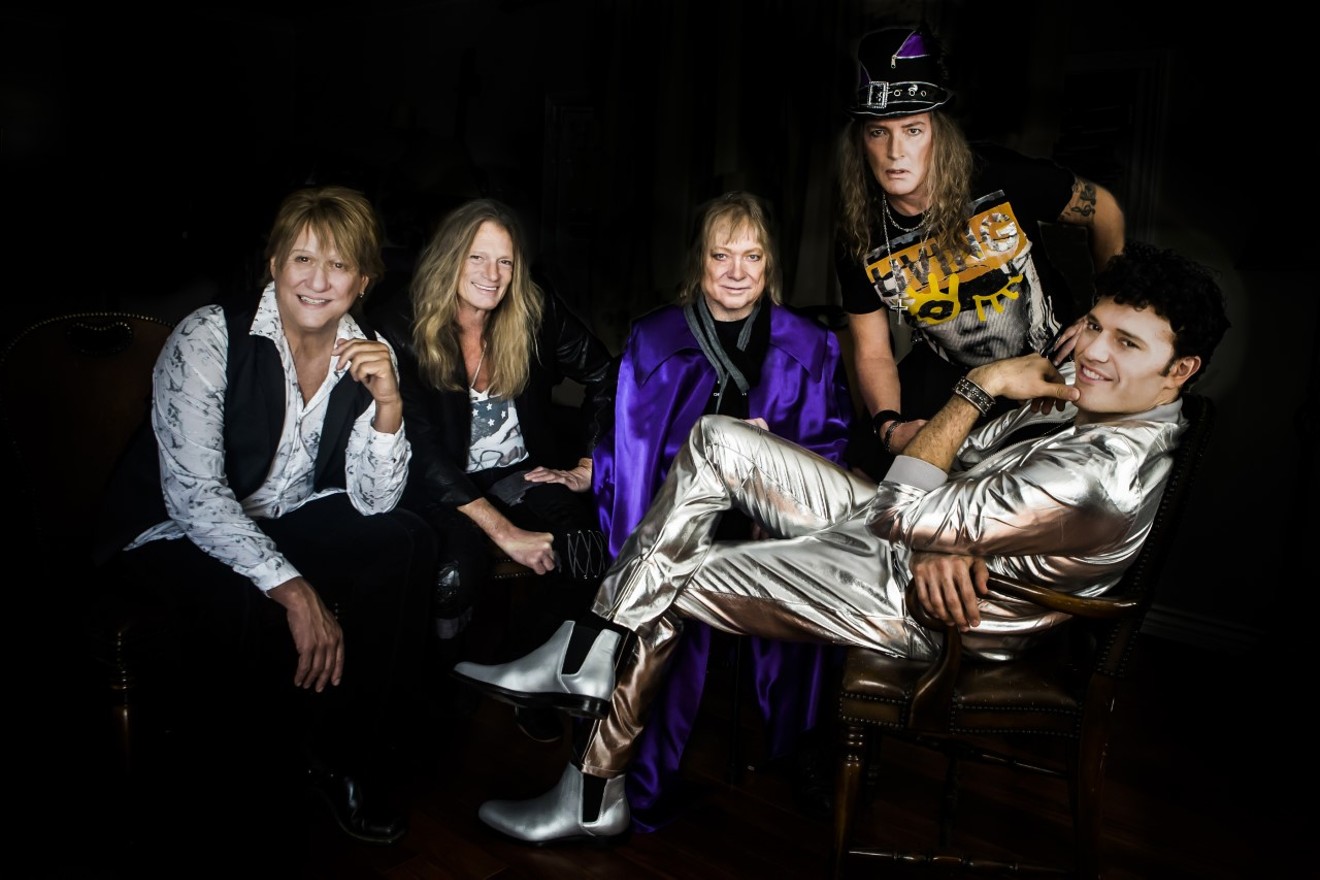 Who's the guy in the purple whatchamacallit? Steve Priest,who's got more than a clue what to do with his new version of The Sweet. MARIE GREGORIO-OVIEDO
You could put The Sweet's 1973 music video for "Ballroom Blitz" in a time capsule, exhume it in 2073 and anyone watching would have the same reaction I did at age 13 and my own son did 40 years later at age 7. "Who is the guy in the vampire cape?"

It starts engagingly enough, with drummer Mick Tucker pounding out a variation of Sandy Nelson's "Teen Beat" while singer Brian Connelly strides cocksure to the microphone and suddenly feeling the need to do a roll of his own band call before launching into the song proper.

"Are you ready Steve?"

The camera is in tight on bassist Steve Priest, so as not to give away his utterly ridiculous (even by 1973 standards) getup.

Connelly's voice is pitched so close to Aunt Bee calling Sheriff Andy to the kitchen for some rhubarb pie that you expect "Opie" to be singled out next. But no, it's drummer Mick and once guitarist Andy Scott and he admit their readiness to similar degrees of nonchalance, lowering expectations for the excitement about to ensure when Connelly decides to kick things into high gear with a cliff-jumping "All right fellas, let's !"


With the possible exception of Slade's Dave Hill, never has a band had such a cherished scene stealer as Priest, who matches Connelly's soprano shrieks and adds his hysterical quaver in the pre-chorus while recounting the man in the back with eyes as red as the sun. I always thought he must've based his delivery on some vaudevillian or maybe an English music hall performer but Priest, fresh from a (or "MASS-age" as he calls it), is relaxed enough on this  to reveal for the first time anywhere the true inspiration behind that voice.

"I don't know," Priest says. "It's if you like. Some of it was [producer] Mike Chapman going: Make it sound like Witchiepoo."

Priest has a droll, sake sense of humor when looking back over the glam-happy Sweet of yesteryear, of which he played a major part with his outrageous outfits and makeup. What started that for The Sweet?

"The makeup thing, I can't remember what started that," he says. "Marc Bolan, maybe. Top of the Pops was a stupid show in some ways but it was like, um, you had to outdo everyone else. So you saw what so and so was wearing, and then you were gonna do Top of the Pops next week and had to come up with something else. Otherwise, you'd just fall into the 'I have no idea who that was' [category]...."
Which would explain his wearing a Nazi Gestapo uniform (with blurred out on YouTube for your protection) on a December 1973 edition of Top of the Pops promoting "Blockbuster."

And rocking an Indian headdress the year before doing "Wig Wam Bam."

And sporting hot pants on Top of the Pops the same year before plugging "Little Willy."

The songwriting credit of those early hits goes to the team of Mike Chapman and Nicky Chinn, who ushered them through early hits like the calypso-tinged "" and "Papa Joe," before perfecting the glam bubblegum of "Little Willy," then becoming a heavy hard rock band who wrote their own material with "Fox on the Run" and later morphing into a prog rock one with "Love is Like Oxygen."

"We were a pretty heavy band when we started and then, unfortunately, one had to pay the rent," Priest groans. "That's when Chinn and Chapman came along, Chinn met Chapman in a club in Soho. London. Chapman was from Australia, in some band called Tangerine Dream or something. He wanted to make it in London. And Chinn was just given a load of money by his millionaire dad who said, 'Get yourself a career.' So he decided that the career was writing songs with Mike Chapman who wrote the songs and Chinn wrote the checks. Then Mike came and bought a house in Beverly Hills in 1975. And then Chinn decided he had to buy a house in Beverly Hills in 1975, a quarter of a mile away from Mike Chapman. Sad, really."

Around the same time, the band were eager to do their own material. "As soon as we wrote 'Fox on the Run,' Chinn and Chapman were over," Priest says.

But it wouldn't be the '70s without the joys of trying to extricate yourself from a bad recording deal. Although the Sweet produced all their later albums from Give Us a Wink onward, they never got the money.

"When we left C&C to go our separate ways, the deal was set up so they got production fees and we didn't," he says. "And that was that. We didn't like the control they had. C&C tried to manage us once which was the biggest disaster ever because they had no idea what they were doing in terms of booking tours. Chinn didn't know what the fuck he was doing anyway. "

America got a lopsided version of the Sweet, having latched onto them a year later than the U.K. with "Little Willy," and having old singles come out here just as new ones were coming out there.

What really didn't make sense was having the subject of a song supposedly being a tough character but named Little Willy.

"And then they didn't want us to come and tour with 'Little Willy' because it would've given the wrong idea of what the band was all about," Priest laughs incredulously. "'Little Willy' still goes down well onstage. I never thought I'd play it again but I am. I like "Action," the stuff we wrote. We're playing old stuff, doing it better than we did and spreading the word, really. We still do 'Blitz' and things because people expect. The idea is not to annoy an audience."

That's a not so subtle dig at the only the surviving member of the band, guitarist Andy Scott, who owns the name and the logo in the U.K. and Australia, while Priest owns the name and logo in Canada and the U.S., where he's lived since 1979.

"If we go anywhere that he owns his version of The Sweet, I have to call it Steve Priest's Sweet," he says. "Or SP Sweet, which is what I'm gonna do. There are some offers coming in from Australia because they're not happy with Andy's version of the Sweet and they wanna hear us. Which is fine with me."

Although Priest temporarily took over the lead vocal chores when Brian Connelly left, he's leaving it to his new band to do the honors. We've got a great lead singer he can do the job. I do my bits but I do not take over."

"I got a different voice than Brian had, It's just like painting a picture, you're just putting another shade of color and sound. And I had a different personality to Brian and we complemented each other very well. Thank heavens."

The late singer has gotten a bad rap for missing gigs and drinking to excess. But Priest counters, "He had problems and they weren't all drink related. Everyone puts it down to booze but that's not true. He couldn't drink. he'd have a couple of pints and be drunk which means you can't drink. Something else happened, He had a nervous disease which is why he was shaking all the time. And he just went downhill fast. Poor lad; I loved him. A great front man. He had a great sense of humor as well. He just wasn't very self-confident. He looked it but he wasn't.

And it's the swagger that Connely brought to the Sweet that Priest says his version of The Sweet has in spades. This is not your chicken-in-the-basket cabaret version of the Sweet playing for the nostalgia circuit.

"When we start playing, it's like a well-oiled machine. And we do the whole 'Love is Like Oxygen,' not like the version Andy does with 'Fanfare for the Common Man' in the middle of it. "

The Sweet will be appearing at BLK Live in Scottsdale on Sunday, January 28.