Stuff We Overheard at Innings Festival 2022 in Tempe

Don't get us wrong: We go to music festivals for the music. But don't discount the entertainment value in eavesdropping on the interactions of your fellow concertgoers.

Two days of Innings Festival at Tempe Beach Park yielded some hilarious snippets of conversation. Here are some of our favorites.

Those black birds are bullying the pigeons.

Finding your way around the festival could be tricky until you memorized the layout.
Roger Ho for Innings Arizona

Man 1: “I said we were under the bridge.”
Man 2: “Hey, there’s like four fucking bridges here — (points) over there, there, that one right there, this one up here. Bridges all the fucking way around.”
Man 1: “Yeah, you’re right. I shoulda been more specific.”

While waiting for an open stall in that weird, bustling port-a-potty corral:

If we were on mushrooms, this would be TERRIBLE.

Is that Jon Bon Jovi?!

Upon almost bumping into a woman wearing a flower crown near the entrance:

Don’t be sorry, be silly.

The worst person ever (for context, she said this to her boyfriend while paramedics were making the crowd move back so they could evacuate someone who had collapsed before Foo Fighters):

If you ever take me somewhere again and we don't have VIP, we're through.

Not Kings of Leon.
Jim Louvau

Before Foo Fighters took the stage:

In my youth, I did an occasional cocaine.

A bluegrass connoisseur at Billy Strings: 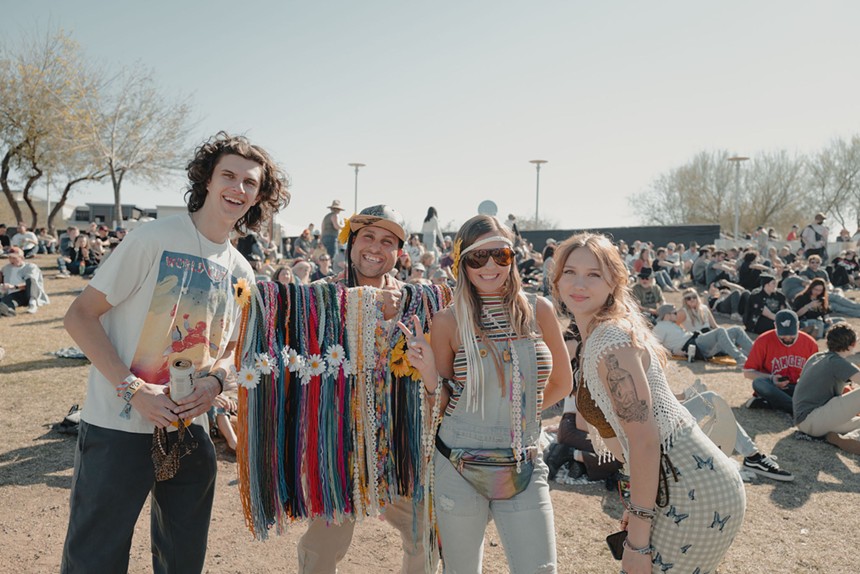 A good investment? Someone thinks so.
Neil Schwartz

A woman browsing flower crowns from a roving vendor:

This is such a great investment!

Someone opening a can of the ubiquitous Liquid Death:

Am I in the right spot? Is my crop top short enough?

Not everyone is built for late nights at music festivals.
Neil Schwartz

Group of friends talking about how late to stay at the festival:

While waiting in a very long line to get in:

Do they use lube in this line or just in the VIP?

Someone walking away from Low Cut Connie’s set:

I was eating out of the garbage can all last night.

A stranger making unsolicited comments to a woman who was just trying to eat her nachos in peace:

That is a massive nacho if I've ever seen one. Like, holy shit. Like, that would be too much for me. Holy shit. You're not even going to eat half of that. Holy shit. Cheers.
KEEP PHOENIX NEW TIMES FREE... Since we started Phoenix New Times, it has been defined as the free, independent voice of Phoenix, and we'd like to keep it that way. With local media under siege, it's more important than ever for us to rally support behind funding our local journalism. You can help by participating in our "I Support" program, allowing us to keep offering readers access to our incisive coverage of local news, food and culture with no paywalls.
Make a one-time donation today for as little as $1.