Talking Stick Resort Arena Has a New Name, at Least for the Moment Talking Stick’s owners announced on November 6 they declined to renew the deal after negotiating with the Suns since earlier this year, according to a press release from the resort.

It’s not the only recent change to the arena, which is currently undergoing a $150 million interior renovation and upgrade that’s adding better seating, revamped bars and lounges, and numerous high-tech amenities.

This is the arena’s third name change since it opened in 1992 as America West Arena. In 2005, it was rechristened as US Airways Center after the airlines merged before becoming Talking Stick Resort Arena in 2015.

The latter renaming wasn’t popular with either sports pundits or NBA fans. Bleacher Report included it on a 2016 list of the “Strangest Stadium Names in Sports” while a hoops fanatic on Reddit said after the change was “fucking trash and anybody who was remotely involved in the naming of it should be waterboarded.” 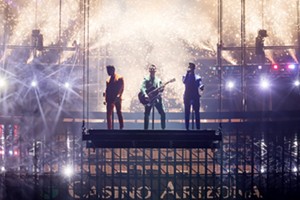 Jonas Brothers at the arena in 2019.
Leavitt Wells
So what’s the deal with calling the venue PHX Arena? If we had to guess, it's a placeholder until a new naming deal can be made (much like State Farm Stadium in Glendale was just Cardinals Stadium for a few weeks after it opened).

Suns fans have a few ideas. A recent Reddit post in the Phoenix Suns subreddit included corporate-affiliated monikers both serious (PayPal Arena, which stems from the company’s marketing and sponsorship deal with the team) and jokey (Filiberto's Arena or the “Fucklakers Arena”).

Whatever name the team decides to go with, Suns fans are glad it's not Talking Stick Resort Arena any longer.

“Fuck that was such a mouthful [for announcers to say] every broadcast,” said one person on the Suns’ subreddit.
KEEP PHOENIX NEW TIMES FREE... Since we started Phoenix New Times, it has been defined as the free, independent voice of Phoenix, and we'd like to keep it that way. With local media under siege, it's more important than ever for us to rally support behind funding our local journalism. You can help by participating in our "I Support" program, allowing us to keep offering readers access to our incisive coverage of local news, food and culture with no paywalls.
Make a one-time donation today for as little as $1.