Breakup Shoes will launch a new national tour this fall. Nolan Veneklasen
Breakup Shoes have come a long way from practicing in what was basically a closet.

The Tempe pop-rock band, which formed back in 2014/2015, started out playing around the city's many DIY venues. Then, after they'd gained some experience, they graduated to larger clubs, even becoming regulars at The Rebel Lounge. And pre-Covid, they'd even played a series of headlining gigs across the Valley. Not bad for a band who wasn't always taking it so "seriously."

"It's only been over the last two, maybe two-and-a-half years that have felt relatively serious," says frontman Nick Zawisa during a recent phone call before their sold-out show on Saturday, November 6, at Crescent Ballroom. He adds that their success is in part to their endless gigging, adding, "There's really nothing better than playing shows, and I know my bandmates agree."

Breakup Shoes see their performance-centric approach to the craft as "old-school, and it feels really organic," he says. This method of carving out an audience and a niche is in stark contrast to how much of the industry operates today, with countless bands blowing up often by pure luck.

"Not to take away from all the artists who got to blow up on social media or anything like that; I would love for that to happen," Zawisa says, adding that they've had some luck in recent years with placement on various Spotify playlists. "I feel like we play really strong shows. Just getting out there and playing shows was the path for us."

And that hard work had seemingly paid off when, in early 2020, the band embarked on their first-ever national tour, supporting Austin, Texas, pop band Summer Salt. However, just as the band was about to start the triumphant leg back home, COVID shut the tour down in its tracks.

"We were raring to do the whole thing. We were tired, but we were still having the time of our lives," Zawisa says. "It seems like we would definitely have had more people who would come out to see us on the West Coast, but we didn't quite make it on that tour. But it was a bummer that we didn't get back to play Arizona." Zawisa adds that shows out West did pose a "new opportunity" for the band's growth. 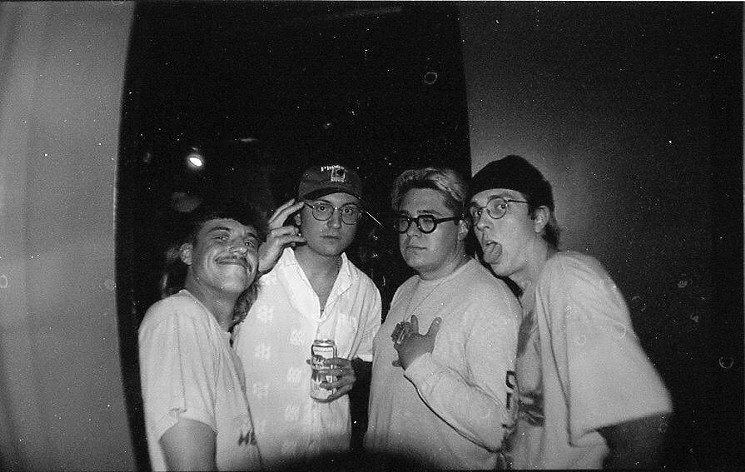 "The big issues were just figuring out how to pack and bring enough merch and proper budgeting and finding a place to stay every night," Zawisa says. "I started to hate using hotel soaps and whatnot. I want to smell like myself every day instead of like a different hotel. I'm also a bit pretentious about coffee and whatnot, and so I was getting kind of burnt out on hotel lobby coffee."

If some of those seem like slightly trivial issues, Zawisa wholeheartedly agrees.

"But those are the smallest complaints to work through considering we are traveling the country as a group of four super-close friends playing music every night, doing what we love," he says.

There were still other, more substantial lessons as well, including making sure each member had ample "me time" to prevent bickering and in-fighting. Zawisa says the outing also helped him understand his role as the "face" of the band.

"It feels like there's a little more pressure on me to say the right things during my banter, which, by the way, I think is the most stressful part of being a vocalist," he says. "I can practice anything, but I don't know how to practice talking to people. It's like trying to do a tight minute of standup between songs."

Additionally, the jaunt helped the band recognize their place in the larger industry, and the power of a well-organized tour for a group's profile.

"At the very beginning, it was more that I don't know how many people are actually here to see us, if any," Zawisa says. "We were just stoked to play. Additionally, it was a well put-together lineup, where fans of Summer Salt would likely be fans of our music."

They also had some great support and inspiration from another band on the lineup, which showed them how to survive the ins and outs of national touring.

"The direct support band [last tour] was Okey Dokey. And their mentality has always been to just play shows all the time, constantly all over the country," Zawisa says. "They're the definition of road dogs, and I found that super inspiring. They were also the best people to be around, and they kept up that positive energy up throughout the tour so well because they're experienced. They have a light-hearted perspective to staying sane while on the road for that long."

It's encouraged the band to try their collective hands at more regular touring, with their first opportunity coming this fall with another national jaunt alongside Summer Salt. Says Zawisa, "That's how we got where we are now; why wouldn't that keep working?"

Of course they recognize the challenges of this latest tour. Zawisa says the band's played just one or two shows in the last 18 months, and they're still "trying to get back in the saddle." But that first tour didn't just teach them valuable lessons — add "eat less drive-thru food" and "bring winter clothes" to the list — it gave them a path forward at a time when some bands needed it most.

"I'm cool with opening for people for a long time to come unless something drastically changes in our following or something," Zawisa says. "I would love to keep playing for bands that are similar enough to us that we enjoy their music and they enjoy ours. I feel like when there's that kind of a touring bill that's pretty attractive thing for us. It has felt like the most effective way for us to be introduced to new fans."

In turn, that could mean the open road will become their future home, with Zawisa dreaming of touring "at least half the year." Because of that goal, the band is free to keep Phoenix their home for the foreseeable future as they plot various national tours.

Once they return home in mid-November, Breakup Shoes don't have "any concrete plans booked," Zawisa says. He added that they're "always working on new songs," which could serve as the follow-up to this year's excellent Narratives EP. He said these latest songs are "in the same sonic world as our older stuff," albeit with new production and "more synth and keys." However, they've been influenced, in part, by the band's time on the road.

"Touring definitely influences our songwriting," Zawisa says. "Performing live consistently makes us want to write more upbeat songs, something to dance and groove to 'cause those are the most fun to perform. Driving through so many different environments, you start to see how your environment shapes so much of the songs people write."

Breakup Shoes seem ready for life as a touring act. They've worked hard enough and smart enough to get to a place in their careers that they're fully comfortable with the uncertainty and endless routine. Because at the end of the day, they know the most important things, and the rest will come in time.

"There will be new music next year, and hopefully more tours," Zawisa says. "The romance of being road dogs."

Breakup Shoes. In support of Summer Salt, with Covey. 7 p.m. doors, 8 p.m. show, Saturday, November 6, at Crescent Ballroom, 308 North Second Avenue. Tickets are sold out.
KEEP PHOENIX NEW TIMES FREE... Since we started Phoenix New Times, it has been defined as the free, independent voice of Phoenix, and we'd like to keep it that way. With local media under siege, it's more important than ever for us to rally support behind funding our local journalism. You can help by participating in our "I Support" program, allowing us to keep offering readers access to our incisive coverage of local news, food and culture with no paywalls.
Make a one-time donation today for as little as $1.
Chris Coplan has been a professional writer since the 2010s, having started his professional career at Consequence of Sound. Since then, he's also been published with TIME, Complex, and other outlets. He lives in Central Phoenix with his fiancee, a dumb but lovable dog, and two bossy cats.
Contact: Chris Coplan
Follow:
Twitter: @CCoplan