The Eight Best Concerts in Phoenix This Weekend Legendary ax-man Ace Frehley. Dove Shore
Want to check out out a show this weekend? You've got plenty of choices — eight of 'em, in fact. Here are the best concerts to see in Phoenix this weekend. For even more options, hit up our online concert calendar.

Ace Frehley – Friday, January 27 – Marquee Theatre
Are you tired of Gene Simmons grabbing all the glory when it comes to capitalizing on the insane success of KISS? What about the other members of the band? They deserve more, if not most, of the credit for taking the band of makeup-wearing musicians to such lofty heights. Guitarist Ace Frehley not only helped shape the sound that made KISS a juggernaut of rock 'n' roll starting in the mid-1970s, he’s also carved out his own solo career starting in 1987 with his first post-KISS project, Frehley’s Comet, followed by three solo albums in between KISS reunions. Frehley’s latest solo album, Origins, Vol. 1, is on the way, and he’s celebrating its upcoming release with another tour that includes a stop at Marquee Theatre this weekend. DANNY GALLAGHER


Velvet Acid Christ – Friday, January 27 – Pub Rock
In 1990, Bryan Erickson started what would become Velvet Acid Christ along with a few like-minded friends whose side and main projects had merged. Recalling early Death In June and Clan of Xymox, the act's debut effort, Fate, came across as the work of people capable of rapid reinvention. Their next effort, 1995's Neuralblastoma, found the outfit incorporating urgent electronic percussion and a menacing undertone within the melancholic atmospheres of its music — think Skinny Puppy, circa Too Dark Park. By 1996, Erickson was more or less helming the act alone, and acted as the primary songwriter until he went on hiatus in 2001 to transition into a healthier lifestyle. The time off didn't hurt. In recent years, Erickson has produced some of Velvet Acid Christ’s strongest albums to date, 2012’s Maldire and 2014’s Subconscious Landscapes. Both efforts exemplify how Erickson explores a variety of sounds, with each album in VAC’s discography featuring different verve or nuance from a core of broadly experimental electronic dance music sounds with live instruments giving it a bit of an organic feel. TOM MURPHY Frank Turner
JJ Medina
Frank Turner and the Sleeping Souls – Friday, January 27 – Livewire
Frank Turner has been known as a relentlessly positive and charmingly optimistic individual for most of his career, despite having taken a long and arduous road to musical acclaim. He achieved recognition as the singer of London-based hardcore band Million Dead before dismantling the group and going solo in 2005. His first full-length, 2009’s Love Ire and Song, showcased the singer-songwriter as a cross between an English Bruce Springsteen and Billy Bragg. His lyrics were earnest and honest, taking in the absurdity of the world and spitting out truths like “Life is about love, last minutes and lost evenings.” Turner’s optimism waned on 2013’s Tape Deck Heart, where, for the first time, he seemed dejected and frustrated by a life on the road and failing personal relationships. His latest, Positive Songs for Negative People, strikes a balance between addressing the trials of life and singing loudly and defiantly as a way of coping with them. Turner will play a career-spanning set with his current backing band, the Sleeping Souls, when he visits Livewire in Scottsdale this month. ANDY THOMAS A scene from last year's Rock Lottery.
Melina Dellamarggio
Phoenix Rock Lottery — Saturday, January 28 — Crescent Ballroom
For the fourth straight year, Crescent Ballroom will play host to the Phoenix Rock Lottery. How does it work? Take 25 local musicians, put them in a room, mix them up, and give them a day to come up with a brand-spanking-new name, three original songs, and time to master one cover. The result? Some of the most interesting juxtapositions in the Valley. Past incarnations have included members of Captain Squeegee, Dry River Yacht Club, Emby Alexander, Mergence, Slow Moses, and Jimmy Eat World. In fact, it was at 2015’s Lottery that Jim Adkins and friends started Wet Lab, a pop punk quintet who went on to release a cassette single. This year’s roster will include members of Phoenix Afrobeat Orchestra, Roar, Okilly Dokilly, Playboy Manbaby, American Longspurs, the Stiletto Formal, Jerusafunk, Bear Ghost, the Haymarket Squares, and Sister Lip. The only way to witness the wild stuff these impromptu bands will invent is to see it yourself. Warning: The show typically sells out. TROY FARAH 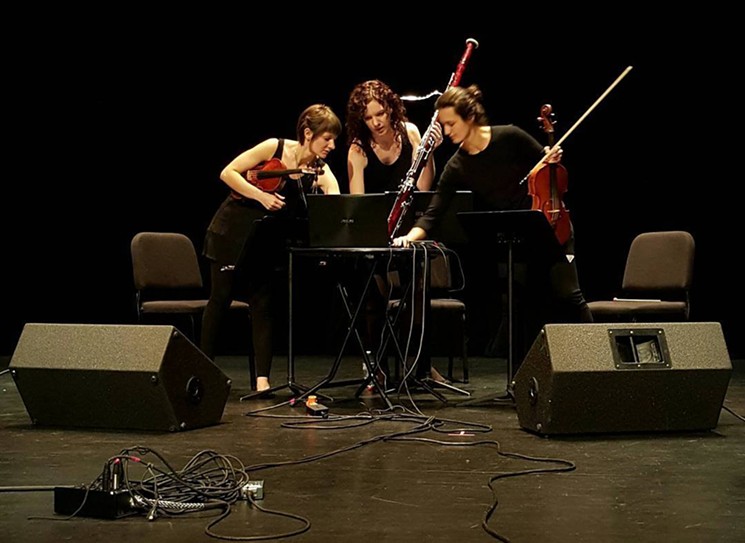 This is certainly not the classical music you're expecting.
Courtesy of OME
OME Marathon Concert — Saturday, January 28 — Mesa Arts Center
Happening on Saturday, January 28, this year’s OME marathon concert at the Mesa Arts Center will feature a guest composer from Los Angeles: Jason Barabba. Bayer and Ferraro invite a different composer every year to not only feature some of their works but to help them program the event. “We try not to just pick artists that we like, but work with the aim of creating a diverse program,” says organizer and composer Elizabeth Kennedy Bayer. “We want to bring in music that’s new to us, not just stuff that we like.” ASHLEY NAFTULE 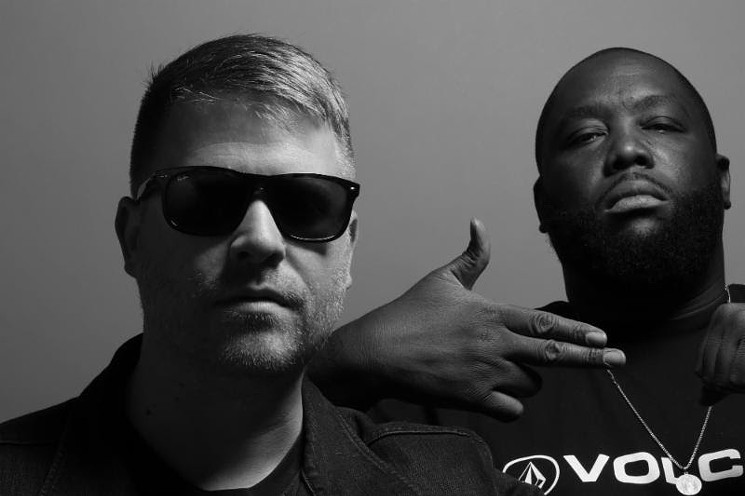 Run the Jewels is scheduled to perform on Sunday, January 29, at Marquee Theatre in Tempe.
Timothy Saccenti
Run the Jewels – Sunday, January 29 – Marquee Theatre
Run the Jewels fans got quite a nice Christmas surprise last year when the band unexpectedly released its highly-anticipated third album. You might still be deciding if your favorite guest appearance on Run the Jewels 3 is Danny Brown’s on “Hey Kids (Bumaye)” or TV on the Radio’s Tunde Adebimpe’s haunting vocals on “Thieves! (Screamed the Ghost).” Heck, you might just be trying to figure out what is going on with the bafflingly repetitive “Call Ticketron.” We get it. In any case, this most recent release from the unbeatable combination of Killer Mike and El-P offers expectedly sociopolitical themes, even taking aim at the country’s new president in “Talk to Me,” when Killer Mike offers “Went to war with the devil and Shaytan / He wore a bad toupee and a spray tan” — a line that leaves little guesswork as to who he’s referencing. Still, as always, with Killer Mike and El-P on deck, you won’t want to miss their characteristic electric live performance on their Run the World Tour. The tour also features a handful of special guests, including Gaslamp Killer, Gangsta Boo, Nick Hook, and Cuz. HEATHER HOCH 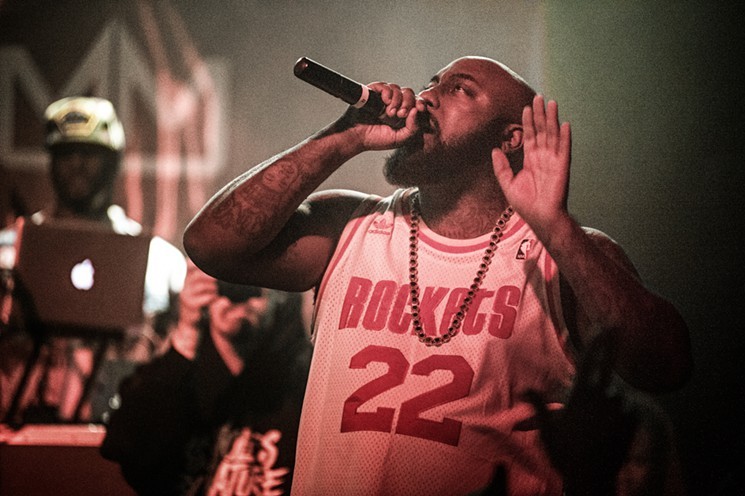 Underground rapper Trae the Truth.
Mike Brooks
Trae the Truth – Sunday, January 29 – Club Red
As practically a rap planet of its own, Trae the Truth’s method has always been simple: He draws you in with tales of his life through a husky, almost solemn growl before unleashing the fire and brimstone that show his scars. He’s a pained giant, and, when it comes to a live show, far closer to a battle-tested warrior who wears his victories through the ink on his skin. Sometimes you forget how many classic songs Trae has in his catalog, until you hear them live and start dancing and rapping along with him. BRANDON CALDWELL