The Rolling Stones Rocked Glendale, but That Sense of Danger Was Gone Mick Jagger was caught in a crossfire hurricane at State Farm Stadium in Glendale Jim Louvau
As I made my way through State Farm Stadium to see The Rolling Stones, many of the people around me agreed with my general assessment of the show’s logistics: It was an absolute clusterfuck. It was as if the event planners and the stadium had wildly, tremendously, HILARIOUSLY underestimated the popularity of The Rolling Stones.

You could feel an audible sense of relief as those giant lips flared to life on the projection screens and Charlie Watts, wearing a bright yellow shirt, strolled out to take his place behind his kit. He was followed by the rest of the gang: Mick Jagger, leathery yet regal, in a sequined black coat; Keith Richards; and Ronnie Wood, wearing a shaggy hairdo that would probably get him a "YOU ARE THE FATHER" result on Maury if Paul Westerberg and/or Tommy Stinson ever hit him with a paternity test.

Keith Richards has the licks.
Jim Louvau
Supporting the band was a tight ensemble of sax players, dueling keyboardists, back-up singers, and a bass player who made you say "Bill Wyman who?" with every deft note he plucked. Opening with "Jumpin' Jack Flash," the first thing that popped out about the Stones live is how rough they sound. I mean that in a good way. They weren't over-rehearsed or polished. Their chops as lifelong musicians are apparent, as is their tight chemistry.

But time hasn't dimmed whatever spurred them on to be a blues-rock band. Richards' and Wood's guitar playing was jagged and woolly, a refreshing contrast to the note-for-note perfection you hear from other legacy bands like Queen that just want to recreate their hits live. "Jumpin' Jack Flash," by contrast, sounded like a different beast in person. The song had aged and changed in interesting ways, just like the people who made it. 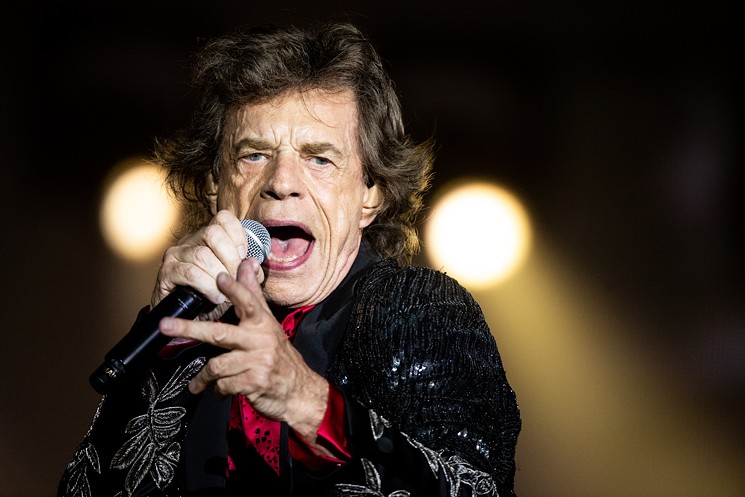 Jagger has time on his side
Jim Louvau
There were moments throughout the show (like on "Tumbling Dice") when back-up singers Bernard Fowler and Sasha Allen picked up some of the high notes and vocal whoops that Jagger couldn't quite hit, but in most respects sounded like Mick Fucking Jagger. This is no mean feat, considering the fact I've seen younger bands touring the nostalgia circuit the sound like their singer got a voice transplant.

The musical MVP of the night, though, was Charlie Watts. There is no stopping him behind the kit: The man didn't miss a beat, displaying an unerring instinct when it comes to playing it light or putting some muscle in his hits. And he did it all while wearing the same impassive, almost bored look on his face. He's Buster Keaton on the backbeat. 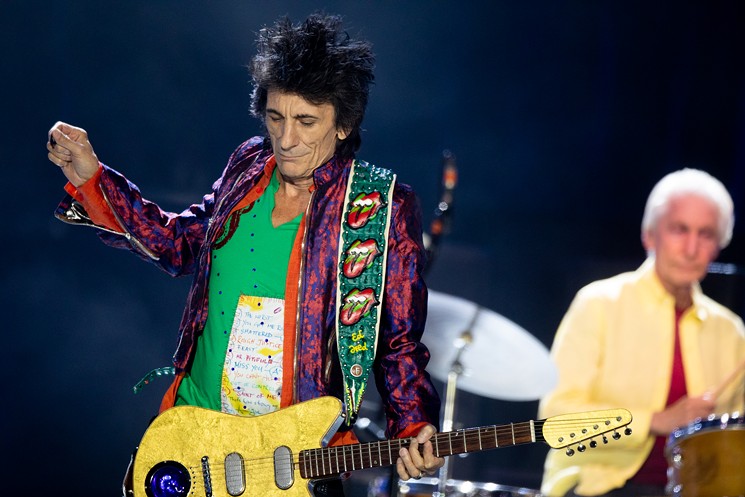 Ron Wood plays the honky tonk blues.
Jim Louvau
They wisely kept their set focused on their '60s and '70s material, playing a smattering of cuts from records like Sticky Fingers, Exile on Main St., and Some Girls. The Stones have been altering their setlists from night , and for their Arizona show, it seemed like they were emphasizing their country-tinged numbers. While the glorious "Wild Horses" was sadly kept in stable, they did hit us with "Dead Flowers" and "Sweet Virginia." The band played these acoustic numbers closer to the floor, moving down a catwalk to set up shop on an in-the-round platform.

The end of "Dead Flowers" actually ended up triggering the most chaotic moment of the night when Watts hurled one of his drumsticks into the crowd. The stick ricocheted off the head of one of my esteemed colleagues and rebounded into the aisle. A pair of men pounced on top of it and furiously fought a tug-of-war over it. You'd think Watts' drumstick was a set of nude Tomi Lahren photos, considering the absolute ferocity these two white boomers displayed before security guards came along to break it up.

The best part about it? The whole thing happened as the band launched into "Sympathy For The Devil" — their timing could not have been better.

That was probably the thing I missed most about The Stones: that sense of danger that pervades so much of their work. Jagger can be romantic, wistful, playful, and melancholy. He can also be perverse and sadistic, leering with delight over whatever lyrical transgressions he's committing.

What was delightful was seeing how much fun they were having up there. The way Watts would break into a grin in the middle of "Get Off Of My Cloud" when Jagger spontaneously hopped behind him (shortly after Jagger almost collided with Wood while sashaying across the stage).

They'd take songs like "Miss You" and "Midnight Rambler" and extend them into long jams, vamping in a way that didn't seem at all planned. The Stones were also pretty generous toward their touring band. Each member got a spotlight moment throughout the show. Bassist Darryl Jones, in particular, seized his moment on "Miss You," turning that song into a clinic on head-bobbing disco bass lines. Sasha Allen also got to take center stage for a bit during the encore on "Gimme Shelter," belting out the climax on the same catwalk that Jagger had been shedding coats on all night long.

They gave "Satisfaction" the stretched-out jammy treatment, but it was worth it. What's the sacrifice of a few hours compared to the thrill of getting to see these old rock gods climb down from Olympus and give us the thunder one last time? We will never see their likes again.

"Gimme Shelter"
"(I Can't Get No) Satisfaction"

The Crowd: HUGE. A very broad spectrum of fans in attendance, from pimply-faced teens in faded Morrison Hotel shirts to college-aged hipsters in Weezer specs. And also one dude who insisted on playing the band’s music out loud on his phone while we waited in line to get in (this is even worse than wearing a band’s shirt to their concert, people: NEVER DO THIS).

Overheard: “Charlie wanted to get my face tattooed on his back.” – Jagger, expressing his disappointment that the Stones’ rescheduled show meant that he missed the Hell City Tattoo Fest.

Random Notebook Dump: Shoutout to my Esteemed Colleague for taking that drumstick shot to the head like a champ.
KEEP PHOENIX NEW TIMES FREE... Since we started Phoenix New Times, it has been defined as the free, independent voice of Phoenix, and we'd like to keep it that way. With local media under siege, it's more important than ever for us to rally support behind funding our local journalism. You can help by participating in our "I Support" program, allowing us to keep offering readers access to our incisive coverage of local news, food and culture with no paywalls.
Make a one-time donation today for as little as $1.
Ashley Naftule