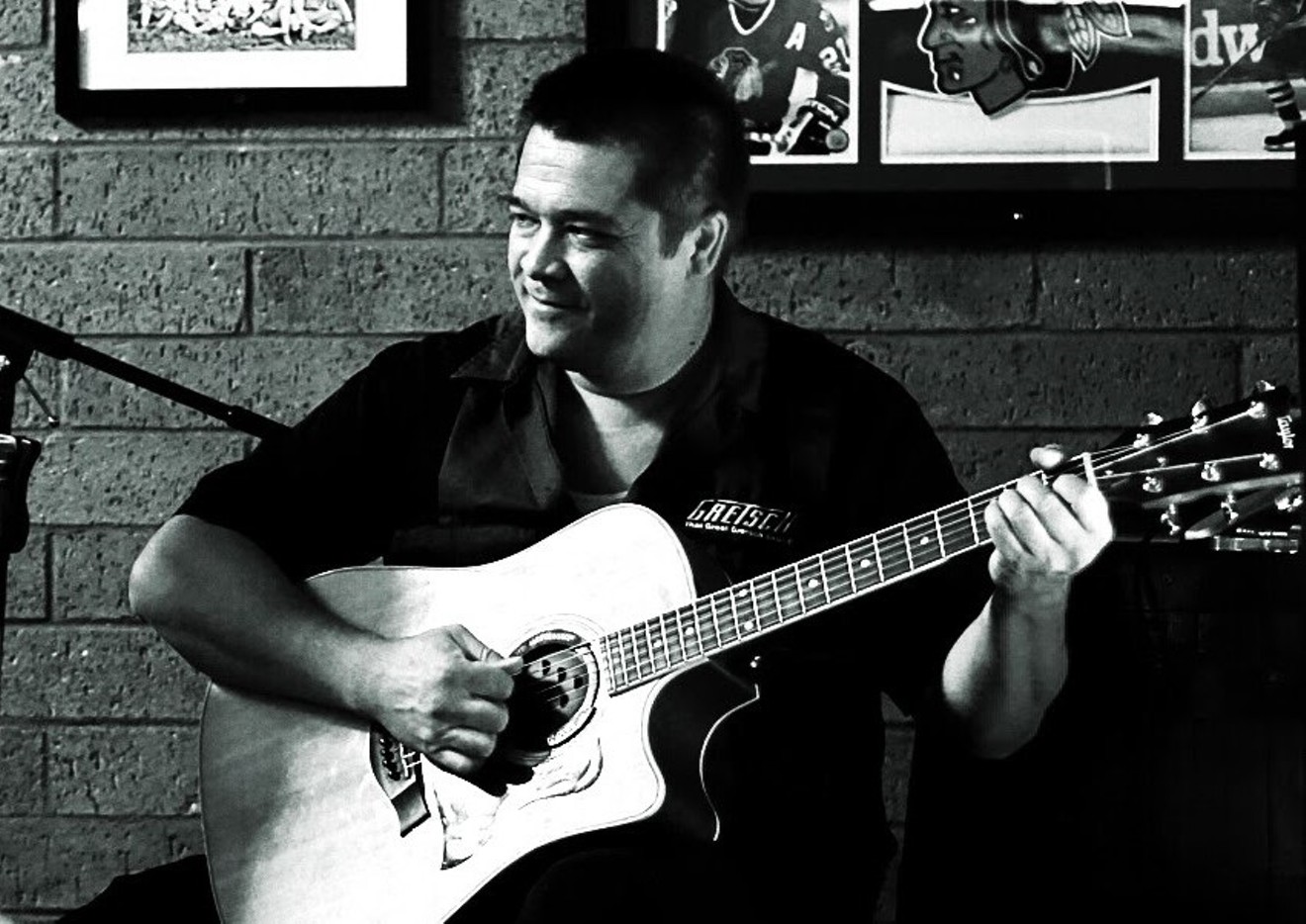 It is difficult, dear friends in the Phoenix music community, to write these words: Guitarist and music gear expert Tim Livingston died on January 4, 2020, after suffering a heart attack. He was 50.

In a city as large as Phoenix, it's odd to think there could be one "go-to guy" for guitars and music gear, but that was truly Tim Livingston. Over an almost-30-year career, Livingston became arguably the most well-respected person in his field, helping countless musicians and bands find the best deal on the equipment they needed. He was the man when it came to just about anything related to guitars, whether it was playing one or finding the perfect ax to add to (or start) a collection. At Guitar Center and other places where he worked in guitar sales over the years, Tim touched the lives and careers of tons of Valley musicians.

I met Tim after graduating from Camelback High School, where we were both students in the mid-1980s. Tim was a shy dude, but super-cool. As we were getting to know each other, he told me one day that he played guitar and asked if I would want to listen. He had his gear in his room at the house he shared with his mom, May, and his brother, Chris. I headed into his room, and he stopped me. I remember him looking down and saying something like, "Um ... would you be okay with sitting in the living room? I don't like to play in front of people."

I got it. I was just getting into singing in a band myself, and I understood being a bit shy about musical ability. I sat in the other room with Tim's big Rottweiler, Sam, and listened to him just shred. I couldn't believe it. Religious Skid, the band I was in at the time, was always in need of a guitar player, and I knew in about five minutes that Tim was the guy. But when I asked him, he just shook his head and said he wasn't ready. He needed to learn more about the guitar.

We both wound up going to Phoenix College in fall 1988. Tim would often give me a ride to school, as our schedules were similar. He'd hang out and party with my roommates and me, sometimes for days on end. When I moved closer to campus in spring 1989, Tim would drop by to listen to music and do what musician-types with too much time on their hands do. (You can make assumptions if you want.) Tim was the type of guy you would want to party with; he had the governor in his brain that would say, "Whoa, there big fella, enough is enough." I think he managed to save a few people from pretty bad situations over the years, and I knew I could always count on Tim.

Tim leaves behind a wife, Cynthia, and two sons, Jet and Eli, behind. It will come as no surprise to anyone reading this that Tim was a wonderful husband and father. In recent years when we spoke, which was not nearly often enough, he would say the most wonderful things about his family. He'd note that, because of them, he knew he had to take it easy on his heart. Tim had his first heart attack over a decade ago. He knew he had to make some adjustments in life, and he did. Unfortunately, his heart wasn't as strong as it was big.

"What people don't say enough is that Tim was a hell of a guitar player, songwriter, music enthusiast, and all-around musician, as well as being a happy family man," says Chris Cannella of Deicide and longtime local favorites N17. "He was an amazing human, and he set the bar for how someone should be in this (music) industry. He always had my back, and was a real friend."

As a longtime friend of Tim's, it was always a point of pride to hear one of my peers talk about this great dude who hooked them up with a guitar or amp. When I'd ask who it was, it was usually Livingston.

"Tim and I met through my 'gear acquisition syndrome,'" says solo musician Casey James Brooks. "He was just so knowledgeable, had a warm demeanor, and was always fair because he had your best interest in mind. He made what had previously been a high-anxiety experience for me into something I looked forward to. Tim was the kind of guy that when you walked into a room, and he was there, you would immediately feel at ease because of his presence."

Sicmonic's Ray Goodwin had this to say:

"Tim was always a considerate and selfless person with a big smile and a kind word. The musicians in town all loved going to him for equipment advice because he was also incredibly knowledgeable, approachable, and honestly, cool. When we first started playing in town over 20 years ago, he was right there helping connect us with the best recording engineers, great clubs to play, quality guitar luthiers, and live tone suggestions. We are all forever grateful to him and offer our sincere condolences, prayers, and respect to his family."

The love for Tim Livingston has continued to pour out as news of his death has gotten around.

"He was such a positive guy who could light up a room by just saying hello, and anytime I ran into him, he easily brightened my day," says Danny Marianino, author and member of North Side Kings. (Full disclosure: I was also in North Side Kings.) "We met in the late '90s, and I can’t begin to tell you how he took care of my band and every other band in town. The last guitar I purchased was from Tim."

Tim was a legend at Guitar Center. Many of his former co-workers have expressed their love and affection for him, and spoke of how much they learned from him. Brandon Meunier of U.S. Bombs had this to say: "What stood out the most to me about Tim was the way he connected with people. He talked to people, and he remembered things about all of his customers and friends. At work, it never felt or looked like a sales technique. This was a guy who just cared ... He wasn’t just a sales guy. He was a good dude and a thoughtful man."

Over time, Tim got over his shyness and began performing with bands and fellow musicians around town. He formed Banned with former Meatwhistle guitarist Ron Besore. Most recently, he was part of an acoustic duo called The Gemstones. It's a shame there will be no more music from this talented guitarist.

One last thought about Tim: In the fall semester of 1989, I decided to take guitar class and needed a guitar. Tim knew just where to get one. He wasn't selling guitars yet, but he knew a guy, and he hooked me up. I still have the guitar that Tim helped me get. When I heard he died, I happened to be in the same room with it. I haven't been able to pick it up yet. But I know that wherever he is, he'll crack a huge smile when I do.
KEEP PHOENIX NEW TIMES FREE... Since we started Phoenix New Times, it has been defined as the free, independent voice of Phoenix, and we'd like to keep it that way. With local media under siege, it's more important than ever for us to rally support behind funding our local journalism. You can help by participating in our "I Support" program, allowing us to keep offering readers access to our incisive coverage of local news, food and culture with no paywalls.
Make a one-time donation today for as little as $1.