The Trunk Space in Downtown Phoenix Will Reopen This Weekend

AJJ performing at the Trunk Space in 2017. Amy Young
Downtown Phoenix DIY spot the Trunk Space has always been an outlier among local music venues. It's a nonprofit operation staffed by volunteers and run by an eight-person board that operates on the grounds of a historic church. There’s little overhead and no bar or bottom line to worry about.

All of these aspects proved to be beneficial during the pandemic, allowing the Trunk Space to stay dark longer than other arts and music venues. It hasn’t hosted a show in almost 20 months (save for an outdoor tribute to late folk-punk artist Andy Warpigs last June).

That changes on Friday, November 5, when the Trunk Space resumes concerts and events starting with a performance headlined by indie rock band Mustard Service.

Local musician Robbie Pfeffer, a member of the Trunk Space’s board, tells Phoenix New Times the venue’s extended absence from the scene was due to several factors. The board wanted to decide on its COVID-19 policies and how to operate at a time when the pandemic is still a concern, he says. Fortunately, their circumstances allowed them plenty of time to make those decisions.

"As a volunteer-run nonprofit, we didn't have to worry about providing the staff's livelihoods,” Pfeffer says. “You have places like The Rebel [Lounge], it makes perfect sense they have to open when they did because there have jobs reliant on putting on shows. We didn't have to do that, so we could take our time and go slowly with it.”

The venue, which is located in a 1,600-square-foot space on the grounds of Grace Lutheran Church on Third Street north of Roosevelt Row, also had understanding landlords who were willing to give the Trunk Space a break on rent.

“They were cool about everything,” Pfeffer says. “So we didn't have the worry where, 'Hey, if we don't start throwing shows right now, we're going to close.’ That helped a lot.”

Pfeffer says Friday’s show by Mustard Service, which is being promoted by Psyko Steve Presents, will basically involve the venue dipping its toes into the water after its extended absence.

"It's a really soft opening and just trying this out, seeing how it works with the COVID stuff, and getting used to this new world and how Trunk Space throwing shows will fit into it,” he says. 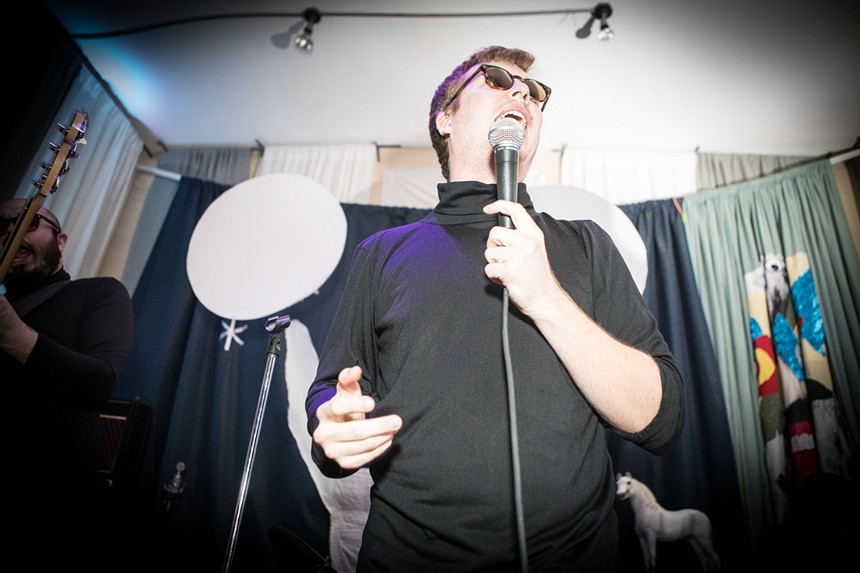 Trunk Space board member Robbie Pfeffer performs with his band Playboy Manbaby at the venue in 2017.
Jim Louvau
November and December will be “very much like we're walking before we're running,” Pfeffer says, including rebuilding their roster of volunteers. A modest lineup of shows are scheduled at Trunk Space over the next two months, including the San Diego synth-pop act Ten Bulls on November 12 and Florida indie rock band Cathedral Bells on November 16.

“We want to see how things go, if it's comfortable, if we can maintain COVID policies that aren't negligent, establishing who's still around who wants to volunteer, and just get used to doing shows again,” Pfeffer says.

Pfeffer says they are also open to hosting art events again, though none are currently scheduled.

"There aren't any specific events we're opposed to doing," he says. "It's just more about quantity right now and just picking a few and not filling up [our calendar] with 25 shows a month."

When it comes to Trunk Space’s COVID-19 rules, Pfeffer says patrons will be required to be masked and fully vaccinated against COVID-19 to attend shows.

"The masks are a little bit easier of an ask than at other types of venues because we're not a bar, so, unless you're drinking water, there's not an inherent need to constantly take off your mask,” he says.

“The board just decided people had to be vaccinated. There's a certain degree of anxiety that's cut out if everyone's on the same page as far as vaccinations go,” he says.

Since its debut in 2004, the Trunk Space has been known for its focus on up-and-coming and under-the-radar musicians, experimental performances, or musical oddities that largely aren’t found elsewhere in the metro Phoenix scene.

While local DIY shows have happened locally over the past year and a half both in-person and online, Pfeffer says Trunk Space’s return will allow local under-the-radar bands and artists another place to perform.

"I think [we] have a specific niche in the Phoenix music landscape,” he says. “The place that Trunk Space holds in the community is somewhere for artists to develop their craft or try out ideas that may not necessarily be commercially viable. And that's how it's always been different here. And with DIY shows, in particular, that is Trunk Space's focus, so I think that's an important thing."
KEEP PHOENIX NEW TIMES FREE... Since we started Phoenix New Times, it has been defined as the free, independent voice of Phoenix, and we'd like to keep it that way. With local media under siege, it's more important than ever for us to rally support behind funding our local journalism. You can help by participating in our "I Support" program, allowing us to keep offering readers access to our incisive coverage of local news, food and culture with no paywalls.
Make a one-time donation today for as little as $1.