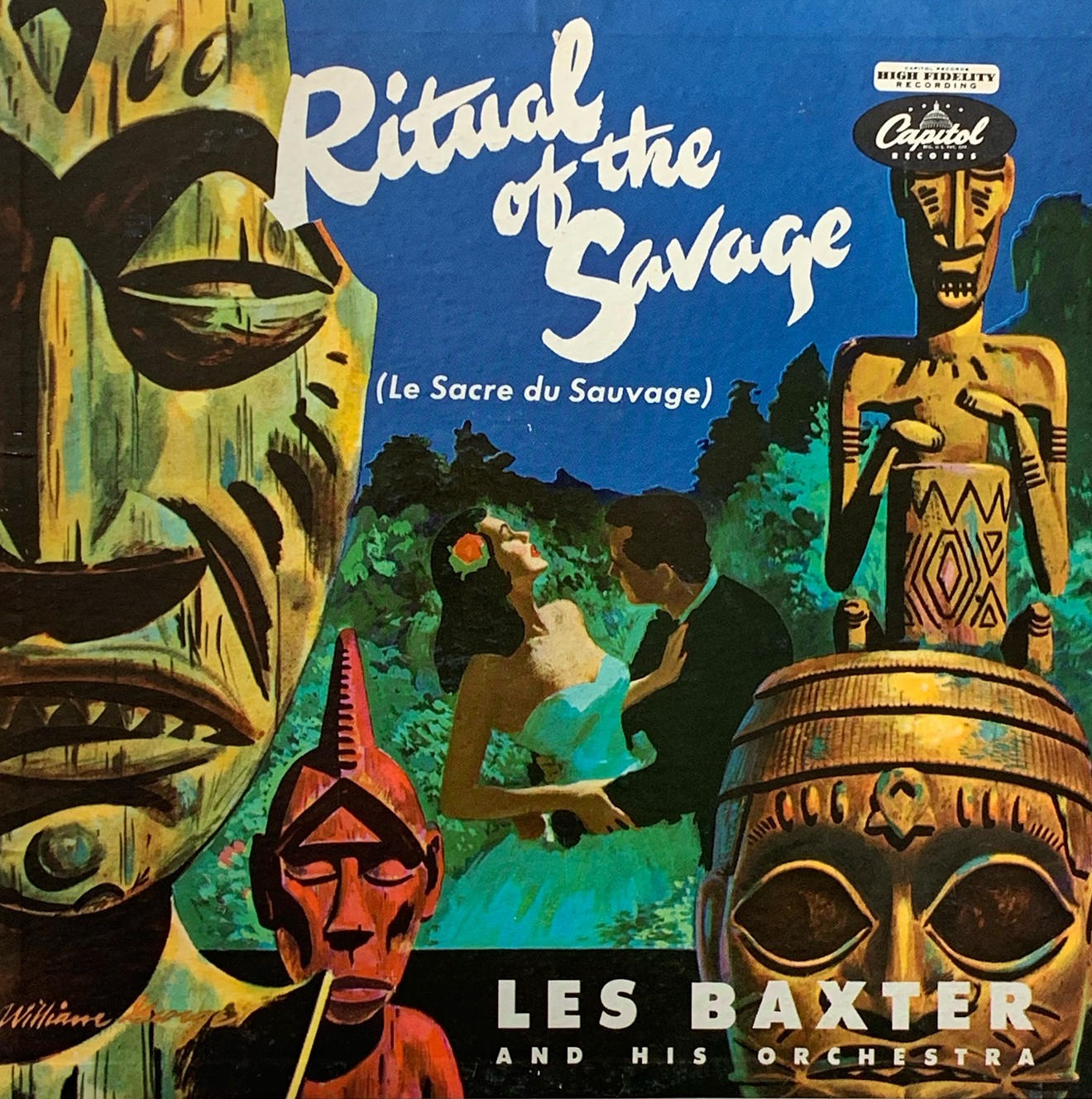 Les Baxter's Ritual of the Savage: Back before "No" meant "No." R. Pela
A handful of people I’ve told this to get it; usually they’re other record collectors. Eric Kohler certainly understood. In his groundbreaking survey of midcentury album cover art, In the Groove: Vintage Record Graphics 1940-1960, Kohler explains how in the late 1940s, when the LP medium was still new, record covers were considered blank canvases; a kind of collaboration with the music they housed. And so, in this era before LP jackets always depicted the artist whose record you were buying, a Ray Anthony or Sarah Vaughn album sleeve was more likely to feature a colorful abstract than a portrait of the performer.

For a while, abstraction in the age of Pop Art was the rule. For Command Records, Bauhaus artist Joseph Albers did a series of covers with repeated shapes meant to describe the sound of percussion or what the bleat of a trumpet might look like. Closer to high art was David Stone Martin’s 1955 primitive watercolor portrait of Stan Getz on his At the Shrine sleeve. Occasionally the artist himself got involved, as when Jackie Gleason created the conceptual acrylic painting on the cover of his 1959 collection titled That Moment.

By the early 1960s, studio photography had replaced much of this high art, but still the artists themselves were usually nowhere in sight. A Dick Hyman disc was less likely to offer Mr. Hyman’s smiley mug than it did a portrait of a beautiful young woman.

Female models — sometimes chastely clad, other times wearing little more than a smile — were a key selling tool during the early days of stereo albums. That’s because, according to cultural historian Rob Chapman, it was mostly men buying records during the long-player’s artistic heyday. Stereophiles tended to be early-middle-aged males whose hobbies included showing off their hi-fi, a new post-war permutation of phonograph that played music stereophonically. The records of this pre-rock ’n’ roll era were therefore marketed to guys with pictures of comely young women posing beneath bold STEREO! banners on their covers.

So: Organist Ken Griffin’s hit version of “You Can’t Be True, Dear” was sold by a portrait of a lovely female face; Jonathan Edwards’ many piano collections were illustrated with evening-gowned lovelies. If you didn’t know better, you’d think Frank Comstock and His Orchestra were a group of raven-haired, bare-shouldered beauties instead of a roomful of balding East Coast session guys. 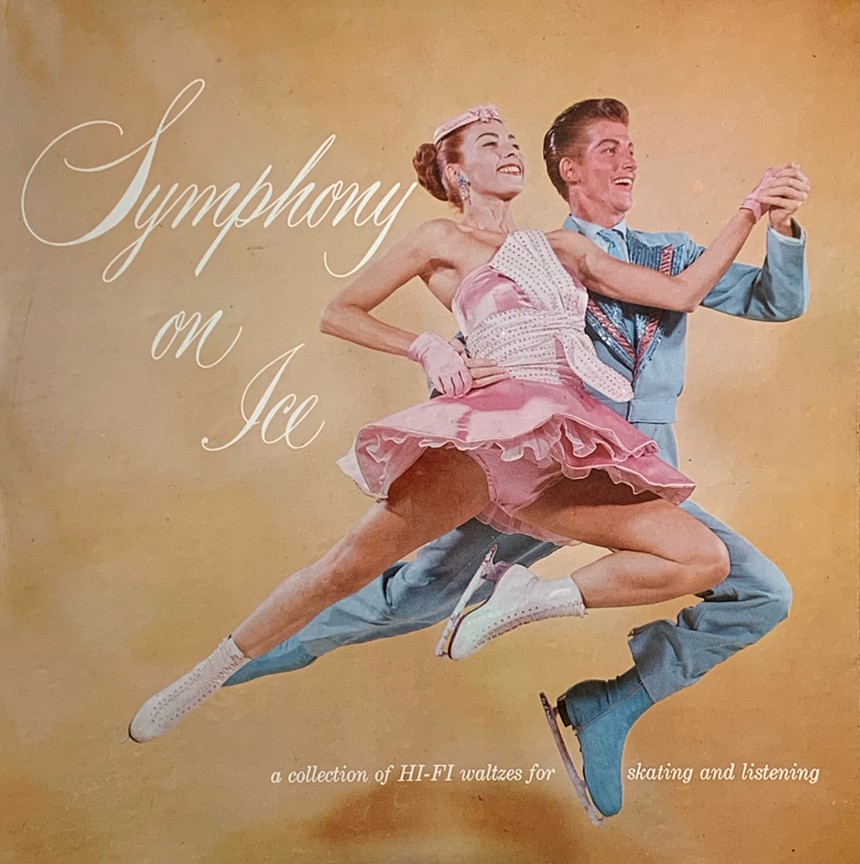 Is there a better album cover?
R. Pela

“Orchestra leader,” I reply from behind a mountain of 45s. “Nineteen-fifties cocktail music. Mercury Records.”

We are in our den, where I keep my record collection. He’s flipping through a stack of albums over in the corner, I’m alphabetizing singles into a clever plastic-handled paperboard box.

I shrug in response.

“Oh, okay,” he says. “This is one of those records you bought because you like the cover.”

It is. I own an inordinate number — several hundred? a thousand? — long-players I’ve never heard and have no intention of listening to — mostly jazz, swing, and Latin recordings of the 1950s and early 1960s.
Sometimes, I have tried to explain to tell people, you buy a record album because the cover is beautiful.

And maybe you do this during that gloomy era when vinyl records are considered passe, when everyone is dumping theirs at thrift stores that then sell them for a quarter apiece. And because they’re so cheap, and because you have a soft spot for record albums and consider yourself a collector of beautiful forgotten things, you make it a practice — for, oh, maybe eight or 10 years before you get tired of this and move on to collecting something else — to buy every single jazz-era, easy-listening album with a cover that takes your fancy. Because they’re cheap, and because why not? But mostly because they’re so dang pretty.

It was anyone’s guess what the artists themselves looked like. In this pre-feminist age, the thinking seemed to be Who needs Bert Kaempfert’s round, shiny, 40-something face when we can buy a nice photo of a pretty girl? It was a different age.

That David Carroll record my spouse pointed to is a good example. I imagine the music on Let’s Dance Dance Dance is pleasant enough; probably bland orchestral arrangements of standards and Carroll originals. But the cover art is fantastic. A buxom, bleached-blonde model in heels and pearls skips across the cover, clearly digging Carroll’s grooves in the fourth installment of the bandleader’s colorful Dance series — all of which I have, none of which I’ve played.

If the many mood music albums I’ve collected titled Holiday In [insert name of far-off locale here] are any indication, post-war tourism also had an impact on audiophiles during the mid-1950s. Each of these depicts a different faraway place, though not always with an image that’d make you want to visit: The tourists pictured on the cover of Holiday in the West Indies look tired and a little sweaty, which makes me treasure this LP all the more, as does the blurry stock photo of a pineapple (what were they thinking?) that graces the sleeve of Holiday in Acapulco. Then there are my Music for… records, meant to be played as prescribed but owned by me because the covers are such spectacular missteps: The chorine lounging on the cover of Eddie Barclay’s Music for Dreaming looks bored and annoyed, while The Melachrino Strings’
Music for Relaxation presents a tense, brooding fellow backlit by an angry sunset.

I keep a few of the classics, those iconic LP covers that one must own if one is a collector of such things. Les Baxter’s Ritual of the Savage is one, its William George watercolor of date rape and tiki gods a thrift-store perennial; Ralph Font’s Tabu, with its promise of “Afro-cha” music and its bold-for-the-time mixed-race cover portrait; and of course Martin Denny’s Quiet Village, with its famous backlot take on a “Polynesian village.”

And then there are those albums I own simply because the covers and the concepts behind them are just so terrible. I assure you I need never hear The Addicts Sing, though I do need to always own a copy of it, because its back jacket design includes a line drawing of someone shooting heroin and a photograph of the nine-member Addicts band, who sing about being saved by Christ from heroin addiction, posing with a VW bus emblazoned with a banner reading THE ADDICTS ARE COMING. Would you open your door to this delivery man?
R. Pela

Any album featuring the otherworldly visage of Heino is a ghastly treat, especially Liebe Mutter…, on which the German pop singer resembles an outer-space flower delivery person, posing shyly behind two dozen roses and his trademark giant horn rims. I could stare for hours at the cover of A Program of Russian Song by the Jaroff Women’s Chorus, because it fills me with such wonder. Is that strange man sitting in that ugly chair conductor Serge Jaroff? Is he kidding with that costume? Why is his belt coming off — and why is he looking at me like a serial killer with a secret? And then there’s the unparalleled beauty of the cover of The Kingsway Strings’ Symphony on Ice, with its close-up, full-body portrait of a pair of skaters suspended in midair, their faces shiny with joy, their skating flounces flawlessly stiff-starched.

That one I bought years ago from Janie’s Record Shop in San Antonio. Its owner, Janie Esparza, used to save albums for me, things she thought wouldn’t sell but that had nice — or spectacularly awful — covers. Janie knew me.

“I know it’s weird,” I confided to her once, after we’d completed an over-the-phone sale of a pile of extra-pretty Arthur Lyman records I planned never to play. “I mean, to buy records from you that I don’t want to listen to.”

Janie chuckled. “Maybe you wouldn’t feel that way,” she'd replied, “if you ever actually listened to one of them.”
KEEP PHOENIX NEW TIMES FREE... Since we started Phoenix New Times, it has been defined as the free, independent voice of Phoenix, and we'd like to keep it that way. With local media under siege, it's more important than ever for us to rally support behind funding our local journalism. You can help by participating in our "I Support" program, allowing us to keep offering readers access to our incisive coverage of local news, food and culture with no paywalls.
Make a one-time donation today for as little as $1.