Your Guide to Wet Electric 2019: Tickets, Set Times, and More Wild times at Wet Electric. Benjamin Leatherman
Fast fact: Back in the late ’70s, legendary local water park Big Surf hosted a weekend disco dance party aimed at teenagers called The Rock Hop. True story (according to Wikipedia, at least). Four decades later, the younger crowd is still flocking to the Tempe attraction to get their groove on, albeit during the annual Wet Electric.

Part electronic dance music festival and part massive pool party, the daylong affair brings a rowdy crowd of thousands of swimsuit-clad EDM fans out to Big Surf during the last Saturday in April to ride the waterslides and enjoy some fun in the sun.

Meanwhile, high-profile DJs and producers drop beats on two different stages around the park, including one in the middle of Big Surf’s ginormous 2.5-million-gallon wave pool.

Other artists scheduled to perform include What So Not, Bruno Furlan, Sacha Robotti, Slumberjack, Sonny Fodera, Taiki Nulight, Tails, VNSSA, and Will Clarke.

What else is happening at Wet Electric? Dive into our guide to the event, which contains everything you’ll need to know.

When and where is the event? Wet Electric 2019 happens on Saturday, April 27, at Big Surf, 1500 North McClintock Drive in Tempe. Gates open at noon and things go until 9 p.m.

How much are tickets? General admission is $59 and VIP tickets (which include a souvenir badge and lanyard, access to exclusive viewing areas, and other amenities) are $125.

If you'd like to splurge, daybeds are $1,280 and cabanas are $1,980 and include bottle service, admission for parties of six or eight (respectively), and other amenities.

Is there an age limit? Wet Electric is only open to those EDM fans 18 or older, and you have to be 21 or older to drink. 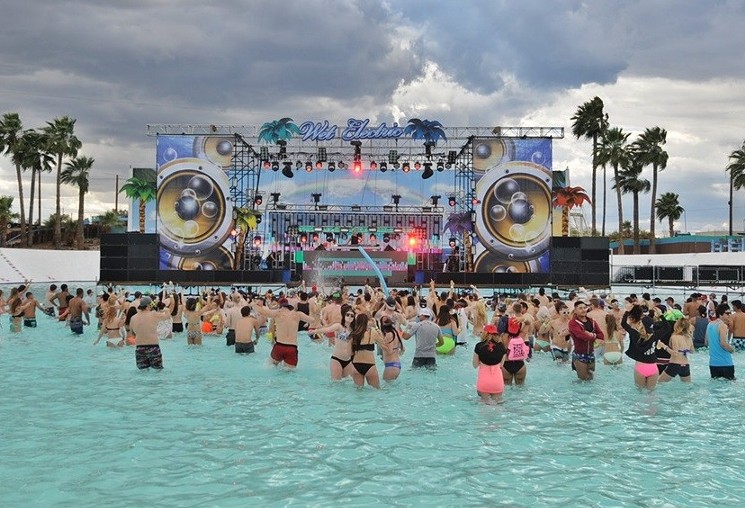 The Wave Pool stage at Big Surf in Tempe during Wet Electric.
Benjamin Leatherman
What’s the weather going to be like? Hot and sunny, basically. Temperatures will flirt with triple digits throughout the afternoon and cool down to about 80 degrees by the evening. Be sure to slather on the sunscreen.

How do I get there? Big Surf is located along McClintock Drive just north of the Loop 202 in Tempe. Since the closest light rail station is almost two miles away, you can either drive or take a ride-sharing service like Uber or Lyft.

How much is it to park? Expect to pay $10 per vehicle.

What’s it going to be like getting inside? Pretty normal for a music festival: Security will be conducting bag searches, pat-downs, and wandings of everyone patron. Be sure to grab everything you’ll need from your car, because there’s no re-entry.

Will there be lockers? Yes. Big Surf has banks of rental lockers available for $15, each featuring charge cords for both iPhones and Android.

Will there be food and drinks for sale? Absolutely. Big Surf’s two concession stands will be open for selling pizza, sandwiches, hamburgers, hot dogs, soft drinks, and similar options. Full-service bars will have beer, wine, and other libations available.

Are they going to have vendors? Of course. Vendor tents will be set up between the entrance and wave pool and will sell a mix of festival-friendly items like sunglasses, EDM gear, swimwear, T-shirts, and other apparel. Bonnie X Clyde will perform on the Wave Pool Stage.
Courtesy of Circle Talent Agency
What’s the schedule going to be like? Performances start right after gates open at noon and go up until 9 p.m. The Wave Pool stage will host most of the bigger artists, while the RB Deep Stage located in the picnic area at the waterpark will feature more house-oriented DJs. Here’s the full rundown.

What should I bring? A government-issued ID and fully charged phone are both recommended, as are sunglasses, sun protection, earplugs, and (naturally) a towel and a change of clothes. Inflatable pool toys will be allowed, as are banners or handmade signs, and fanny packs or small bags.

What shouldn’t I bring? Any illegal substances or drug paraphernalia, weapons, outside food or drink, Camelbak-style water bladder systems, fireworks, oversized bags, coolers, eyedrops, and anything else potentially dangerous or distracting. It also goes without saying that any swimwear worn at the festival has to cover all of your naughty bits.
KEEP PHOENIX NEW TIMES FREE... Since we started Phoenix New Times, it has been defined as the free, independent voice of Phoenix, and we'd like to keep it that way. With local media under siege, it's more important than ever for us to rally support behind funding our local journalism. You can help by participating in our "I Support" program, allowing us to keep offering readers access to our incisive coverage of local news, food and culture with no paywalls.
Make a one-time donation today for as little as $1.