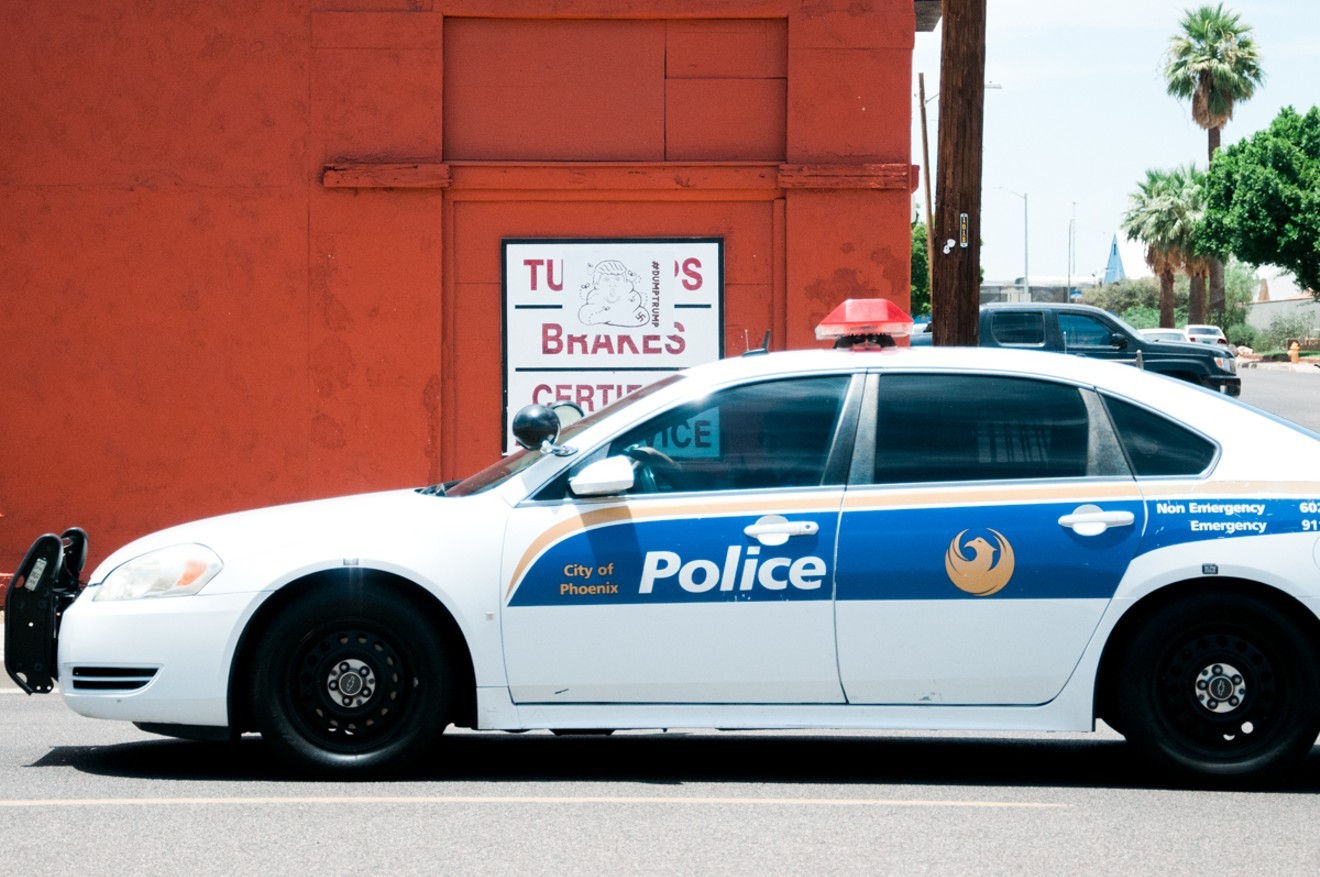 A Phoenix Police Department vehicle. Ash Ponders
Mocking someone with a baby voice. Drunkenly telling casino security staff you have "jurisdiction over the whole West Coast." Fighting another cop. These are just a sampling of misconduct charges against Phoenix police officers that sparked state investigations in recent months.

Several new investigations into three Phoenix cops were announced last week at the Arizona Peace Officer Standards and Training Board's April meeting. Two of those officers already have resigned or have been terminated from the department. One faces an ongoing criminal investigation.

Arizona POST is a state board that oversees law enforcement training and regulations in the state. It also has the power to revoke or suspend officer certifications — licenses that allow officers to work in law enforcement. When an officer is fired from a department for misconduct, the board investigates independently and considers revoking or suspending the officer's certification as well.

The board's workings provide a glimpse into law enforcement misconduct around the state, which otherwise is often dealt with quietly by agencies. Each year, dozens of officers have their certifications revoked by the board. Dozens more agree to relinquish their licenses voluntarily and avoid a hearing.

The Phoenix officers were disciplined among 12 cops from around the state, including a Chandler cop who repeatedly grabbed suspects and detainees by the neck, a Tucson officer who allegedly assaulted his wife, and a Department of Public Safety trooper who drove drunk and was charged with an extreme DUI, according to POST records.

Full case files, which include internal Phoenix police investigations and officers' statements or evidence in their defense, are not posted publicly by the board. The board has not yet provided them in response to a New Times public records request.

Based on the POST records that are available, one former Phoenix cop now under investigation by the board is Malcolm Buckner, who joined the force in 2019. According to board investigators, Buckner first came under scrutiny in April 2021, when he got in a fistfight with a fellow officer.

Buckner and the other officer were on duty and in uniform at the time, according to the Phoenix Police Department's own internal investigation, which the state summarized at the meeting. The two got into a text disagreement over Buckner's work ethic, and Buckner drove to where the other cop, Jonathan Chavez, was stationed.

Internal investigators didn't conclude who started the physical fight. Chavez, who remains on the force, admitted to "taking a fighting stance," investigators reported. Buckner said Chavez had pushed him, and in response, "he pushed Officer Chavez back."

Chavez was treated at the hospital for minor injuries, and no one was prosecuted.

Two months later, though, Buckner was in hot water again, this time off duty in Las Vegas. According to the POST investigators' telling, Buckner got drunk at the Mandalay Bay resort and casino, and got in an altercation with security guards, who ordered him off the property. Reportedly, he informed them that he "could take all three of you," adding that he had "jurisdiction over the whole West Coast."

The Las Vegas Metropolitan Police Department was called after Buckner returned to the casino, investigators said. He later lied to his supervisor when he told the Phoenix Police Department about the incident, saying he hadn't interacted with any law enforcement, Phoenix's internal investigation found. Buckner resigned from the force in October 2021.

Buckner stopped responding to queries on social media from New Times. The union that represents Phoenix police officers, the Phoenix Law Enforcement Association, also did not reply to inquiries.

The POST board also recently opened another case into a Phoenix officer, Jonathan Portillo-Chavez. The incident occurred when several officers detained a man who was speaking to a woman whom the officers believed was a sex worker. It's unclear if this man was ever charged with a crime.

Investigators reported the man later said he viewed this as a threat of violence, and submitted a complaint to the city after the incident.

When the man then called his mother to inform her that he was being detained, Portillo-Chavez mocked him using a "baby voice," investigators said. Portillo-Chavez later said in an internal interview that he had done so "to highlight that [the detained man] was not able to handle the situation." He then flipped off the man as other officers laughed.

"I just believe it was one of those days where I let him get the better of me and kind of just exploded," Portillo-Chavez told investigators.

An internal investigation by the Phoenix Police Department found that the interaction amounted to harassment and intimidation, and the officer received a 240-hour suspension. Arizona POST declined to take any further action against him given that he already had served the suspension.

Finally, Arizona POST also is investigating Danny Rubio, another former Phoenix cop, who allegedly claimed a $6,000 essential workers child care benefit he was not entitled to due to his income level. Arizona Department of Economic Security recommended to the Maricopa County Attorney's Office that he be charged with three felony counts for fraudulently claiming the money. MCAO declined prosecution.

But according to court records, Rubio also faces more serious criminal charges that were not mentioned by the board last week. In December, the Tempe Police Department opened an investigation into Rubio. On April 18, MCAO charged him with three counts of child abuse, a class four felony.

After Rubio's son went to school with visible injuries and disclosed that his father had "physically abused him by using a closed fist to knock on his head," court records show, Tempe police opened their investigation. Rubio isn't the first Phoenix officer to face child abuse allegations in recent months.

Tempe officers on the case discovered an "extensive history of reported child abuse" reported to the Department of Child Services. Two women who are the mothers of Rubio's children have orders of protection against him, the officer noted in his report on the matter.

In December, Rubio was listed in court records as an officer "on extended leave" with the Phoenix Police Department. He had worked at the department for more than three years by that time. Arizona POST investigators said he has since been terminated from the agency, though it's not clear when.

It's also not clear whether Arizona POST is aware of more recent charges against Rubio. At the April meeting, state investigators said the board was notified of potential criminal conduct by Rubio on December 23, two days after his arrest. They did not specify what this criminal conduct was.

Investigators then requested further information on Rubio from the Phoenix Police Department, which ultimately provided Arizona POST an internal investigation into the allegations of fraud.

A Phoenix police spokesperson wrote that the agency was aware of the charges against Rubio. He was terminated from the department on April 6, the spokesperson said, less than two weeks before the charges were filed. The agency said it had no further comment on the other POST investigations.

Neither Rubio nor Portillo-Chavez could be reached for comment.

Arizona POST officials are now deliberating on whether to revoke Rubio's officer certification, and will likely present their final case to the board in the coming months.

At the meeting last week, the state board also accepted former Phoenix officer Daniel Beau Jones' relinquishment of his officer certification. In 2019, Jones was the subject of multiple New Times reports over his misconduct, which had spurred four different lawsuits alleging he had abused coworkers and beat a civilian so badly that he was left with brain injuries.

Now, three years after he left the department and after the state board opened a case into his conduct, Jones is banned from law enforcement.
KEEP PHOENIX NEW TIMES FREE... Since we started Phoenix New Times, it has been defined as the free, independent voice of Phoenix, and we'd like to keep it that way. With local media under siege, it's more important than ever for us to rally support behind funding our local journalism. You can help by participating in our "I Support" program, allowing us to keep offering readers access to our incisive coverage of local news, food and culture with no paywalls.
Make a one-time donation today for as little as $1.