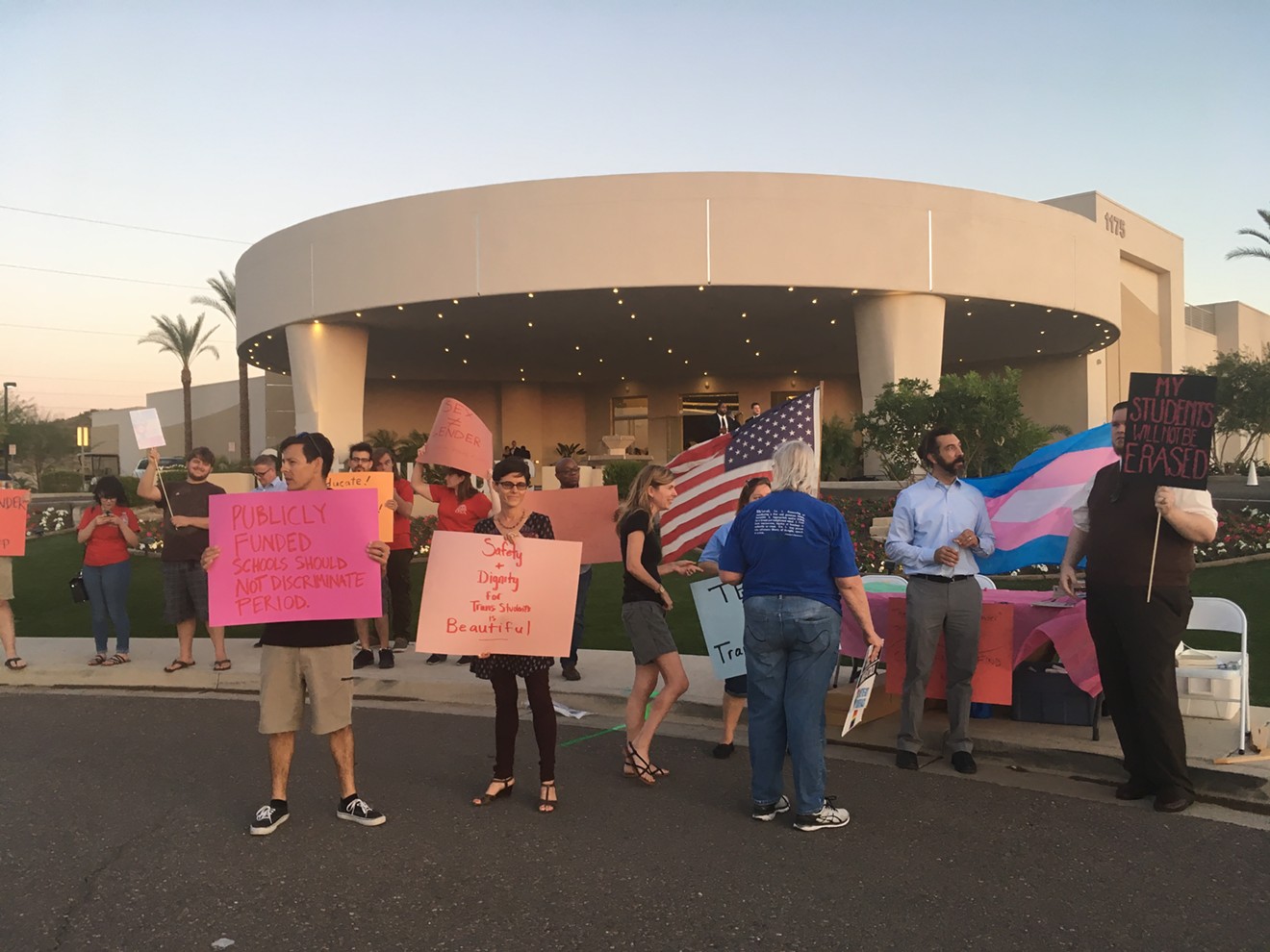 Parents approach Great Hearts administrators at their gala about policies they say are discriminatory towards transgender students. Molly Longman
Robert Chevaleau stood tall in the twilight in front of the Chateau Luxe event venue where Great Hearts Academies was hosting its annual fundraising gala.

The father of two was giving a speech about how Great Hearts Academies' "sex and biological gender" policy was discriminatory toward transgender students.

"My family left Great Hearts in December of last year after it became clear that Great Hearts would not accept my transgender daughter," Chevaleau said of his kindergartner, twiddling his sunglasses in his hands.

Then he stopped talking.

Since his family left the public charter school last year, Chevaleau has been crusading against the policy, which prohibits transgender students from using bathrooms and facilities that correspond with their gender identity, or their internal sense of being male, female, or something else. The rules don't require teachers to call students by their preferred name and and dictate that students must follow the “uniform code and grooming standards” of the sex listed on their birth certificate.

That's why Chevaleau, alumni, parents, advocates, and one Great Hearts teacher gathered in front of the school's fundraiser holding up transgender flags. Sonja Stone, the mother of a transgender student who graduated from the school last year, held a green sign that read, "Not So Great Hearts."

But Chevaleau didn't get to finish talking about how Great Hearts policies were detrimental to his daughter. Mid-speech, he noticed Great Hearts Chief Innovation Officer Erik Twist walking down from the event venue to the sidewalk where the protesters were gathered.

Twist, wearing a tuxedo, beelined for Hannah Duncan, who graduated from Great Hearts' Veritas Preparatory Academy in 2011 and who organized the rally outside of the gala. She'd met with Twist before to discuss her problems with the policy.

She hugged Twist and handed him a red letter signed by regional doctors, which described how the policy could be harmful.

Chevaleau stopped mid-speech to join their conversation with Duncan and Twist. 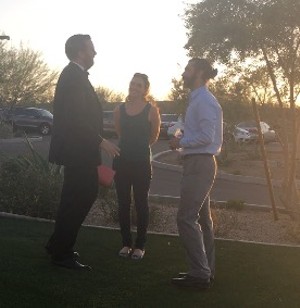 Stone approached Twist, who towered over her as he shook her hand.

Stone's son, Jude, graduated from Great Hearts' Scottsdale Preparatory Academy last May and was affected by the policies as a transgender man whose birth certificate says "female."

"I'm Jude Stone's mom, I think you met with him," Stone said.

"I have to let you know the trans policy, it was damaging to him," Stone said slowly. "He's a good kid. He's not a freak. He doesn't need to be separated. He doesn't need his own bathroom facility. I don't know if you're aware, he won the Veritas award for his grades, so he's obviously a good student, revered by faculty and administration at Scottsdale Prep."

"It's so apparent from talking to him," Twist mumbled. "You've done well."

The two stood in stony silence for a moment, as if each was waiting for the other to say something more. Then Stone walked away.

Duncan and Chevaleau continued to ask Twist a barrage of questions about the policy and the science behind it.

"We're taking everything to our team, to board members," he said. "There are good people on both sides of this issue."

Twist quickly dismissed himself to return to the party. He did not answer a question from a Phoenix New Times reporter, saying he had to get back to the gala. Great Hearts representatives previously refused to comment on the issue.

Stone wasn't satisfied with her interaction with Twist.

"Telling me I have a great kid, but that nothing is going to change is not really what I'm looking for," Stone said.

She thought Twist owed her more than that. She recalled the "heartbreaking" experience of seeing her child be victimized by the public charter school's policies.

"My kid was discriminated against," Stone said. "He was given a special restroom at the back of the school called 'gender neutral,' which is the handicap bathroom." Sonja Stone and Stu Kemppainen protest Great Hearts' anti-transgender policy.
Molly Longman
Duncan said she organized the peaceful protest to raise awareness about the policy and to deliver a letter signed by Phoenix physicians that stated the policy was damaging to transgender students.

The letter was written on a large red piece of construction paper and was signed by 13 regional doctors. It was red for a reason — it represented the potential dangers of the policy.

It cited the American Academy of Pediatrics stating “as pediatricians, we know that transgender children fare much better when they feel supported by their family, school, and community." It noted that transgender youth are more likely to be bullied in schools and are disproportionately burdened by depression, substance use, and suicide.

"Before people donate money to the school, we want them to know that students are being affected by their discriminatory policies that are in place," Duncan said. "We want to put pressure on the Great Hearts community from the community beyond the academies and let them know that it's not par for the course to not respect students' gender identities."

Duncan said she came to the protest with hopes that the letter and the conversations it might inspire would convince the Great Hearts board of directors to discuss the policy at their September meeting.

But during her conversation with Twist, she realized the meeting had already happened and the transgender policy wasn't discussed.

"It wasn't even on the agenda, which is alarming," Duncan said.

This was surprising to Duncan — especially considering the school garnered so much negative attention because of the policy.

Although it was quietly implemented during summer 2016, the policy didn’t begin to gain much attention until the city of Scottsdale began crafting plans to partner with Great Hearts on a park for residents in the DC Ranch area that Scottsdale Preparatory Academy students would use as athletic fields.

This sparked a letter from the ACLU and opposition from outspoken advocates, parents, alumni, and students.

Duncan said the fact that the board didn't discuss the policy after all that was bad news. She took this as a sign Great Hearts wasn't taking the charge to remove the anti-transgender rules seriously — that they were blowing her off.

"It really denies any optimism I have about how productive these conversations will be," she said.

"The good news is there's going to be another board meeting in November."

Duncan said Twist told her to follow up with him via email to schedule a "listening session" about the policy.

She hoped the listening would lead to action this time.

"We really want to express the urgency of doing this very soon because students who have to go to school on Monday are impacted by this," Duncan said. "Waiting until November seems like many days too far, but we will take it."

As for Chevaleau, he didn't need to finish his speech to express his feelings about the policy or the conversation with Twist.

He only needed one word: "disappointment."