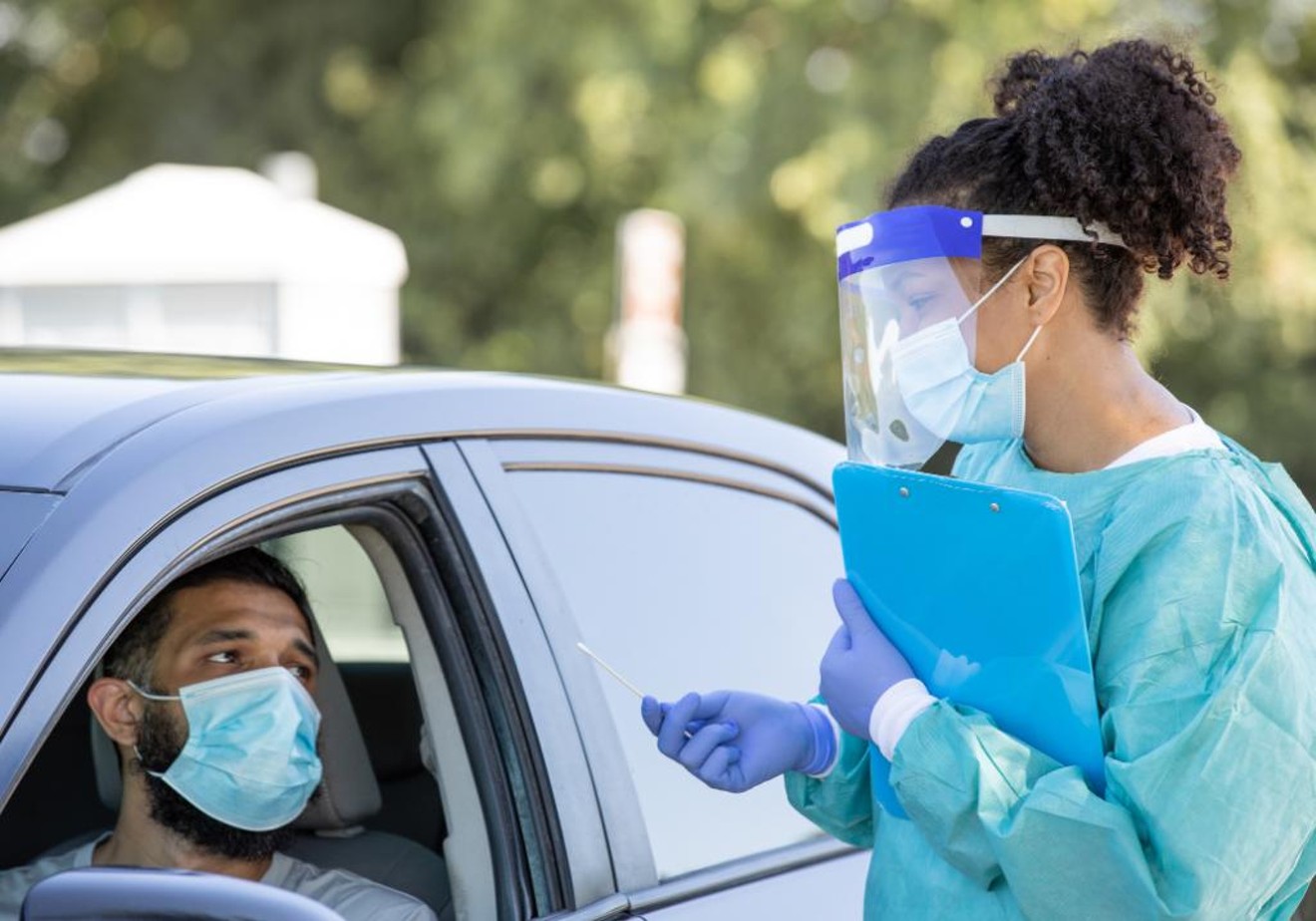 Cases are down, but it's important to keep getting tested if you feel unwell or interact with the public regularly. Arizona Department of Health Services
It's Tuesday, February 23. More than 810,000 Arizonans have contracted COVID-19 and more than 15,650 have died as a result. Here's what happened in the last week:

Arizona is averaging 1,500 cases of COVID-19 each day. The average number of new cases each day continues to drop. Cases are now closer to where they were at the beginning of August as the state came out of the summer surge, but not as low as in September when there were only a few hundred cases reported each day.

People with COVID-19 occupy only a quarter of intensive-care beds statewide for the first time since late November. Overall, 16 percent of intensive-care beds are available as hospitals work through a backlog of non-COVID-19 patients and towards reestablishing the recommended 20 percent "safety margin." More than half of COVID-19 patients in intensive care, 266 of 447, are still on ventilators. It's likely that number will continue to decrease as patients either recover or die.

Banner Health has resumed all inpatient surgeries and is now allowing one visitor per day for patients as hospital capacity opens up. "These trends are exactly what we would like to see, and we hope that they will continue in the weeks to come," Chief Clinical Officer Marjorie Bessel said at a briefing last Wednesday. Hospitals aren't totally out of the woods yet, though. Banner's intensive-care usage remains 10 percent higher than in the peak of most winters — the busiest season. Hospitals are continuing to operate overflow beds, with some at 150 percent of their usual capacity due to the additional spots. More than 1,900 contract workers are helping to manage the situation, but the hospital system is working on bringing down their numbers as possible, Bessel said.

Death numbers remain high as Arizona feels the end of the winter surge. Authorities are still routinely adding more than 100 people to the death toll each day. Last Wednesday, Arizona passed the most recent milestone, racking up a total of 15,000 dead. The death toll lags behind the number of cases due to both reporting delays and the lengthy hospitalizations that can precede death. Arizona is sixth in the nation for the number of COVID-19 deaths reported in the last week compared to population, according to the Centers for Disease Control and Prevention.

Governor Doug Ducey ordered flags to fly at half-mast for five days in honor of those lost to COVID-19. The order began today, Tuesday, and will continue for five days. It is in coordination with a federal proclamation issued Monday to recognize that 500,000 Americans have now died from COVID-19. Ducey's announcement was met with some pushback online, as commenters said he could have done more to prevent deaths in Arizona by implementing mitigation measures that public health experts long called for.

A total of 1.5 million doses of COVID-19 vaccines have been administered in Arizona. More than 1.09 million people have received at least one dose and nearly 414,000 have received both needed doses. That means around 5 percent of the state's population is protected. Experts say 70 to 90 percent of the state will need to be fully vaccinated to establish herd immunity. On Friday, Arizona Department of Health Services executive director Dr. Cara Christ said that more than 90 percent of vaccines allocated to the state had been used.

Gila County is the first in the state to reach phase 1C of vaccinations. That includes people with high-risk medical conditions and people living in congregate settings. Six other counties are now offering vaccinations to anyone in phase 1B, which includes essential workers and high-risk adults in congregate settings. The counties had previously limited shots within the 1B designation. The state's most populous counties continue to prioritize certain subgroups of phase 1B, such as teachers and people aged 65 and older.

Historic winter weather in the rest of the country is hampering Arizona's vaccination efforts. Bessel said that vaccine doses, shipments of syringes, and other medical equipment have been delayed. State and county officials have scrambled to move around available vaccines to address resulting shortages. Pima County had to cancel 3,000 appointments but is expected to make up the missed doses when the shipments arrive this week. Christ said that they plan to reschedule all missed appointments in coming weeks.

Maricopa County is going to shut down its northeast and southeast mass vaccination sites in favor of more localized sites spread through the community. The sites, operated by healthcare organizations in partnership with the county, were only meant to last for phase 1A of vaccinations, but have continued to provide vaccines through the current 1B phase. The number of locations to receive vaccines in Maricopa County has exploded in the last couple of weeks as pharmacies began receiving doses of the vaccine directly. Christ said that around 280 pharmacies in the state received 100 doses last week as part of a federal program, and more are on the way.

The state has opened a mass vaccination state in Tucson, but not everybody is psyched about it. The third state-run site is located at the University of Arizona and is the first outside of Maricopa County. However, local officials say the real issue is the number of vaccines allocated to Pima County, something they have complained about for weeks. "We want to be in a situation where everybody is vaccinating to the maximum extent possible. We're not there yet because of the supply-side issues and I don't know that this makes our life any easier to manage," Dr. Francisco Garcia, the county health department's chief medical officer, told a local TV station. The U of A site will allow people to walk up to receive their appointments.

The state will take over one of the east Valley sites that the county is shutting down. The site is located at Chandler-Gilbert Community College and will open on March 3 after a brief shutdown to transition operations from Dignity Health to state staffing. Due to limited supplies, it will only operate from 7 a.m. to 5 p.m., but will be able to expand as more doses become available.

Arizonans on Medicaid are now able to expense the cost of transportation to get vaccinated. Starting Monday, eligible people can call their health plan to arrange nonemergency medical transportation to take them to their appointments. It's estimated that 30 percent of Arizonans are covered by Medicaid.

If you want to try and sign up to get vaccinated, here's where to go. If you want to register inside Maricopa County, you can go here to find a location near you. If you want to register for somewhere in the rest of the state, go here.
KEEP PHOENIX NEW TIMES FREE... Since we started Phoenix New Times, it has been defined as the free, independent voice of Phoenix, and we'd like to keep it that way. With local media under siege, it's more important than ever for us to rally support behind funding our local journalism. You can help by participating in our "I Support" program, allowing us to keep offering readers access to our incisive coverage of local news, food and culture with no paywalls.
Make a one-time donation today for as little as $1.