How ADOT Is Using Digital Facial-Recognition System to Catch Crooks 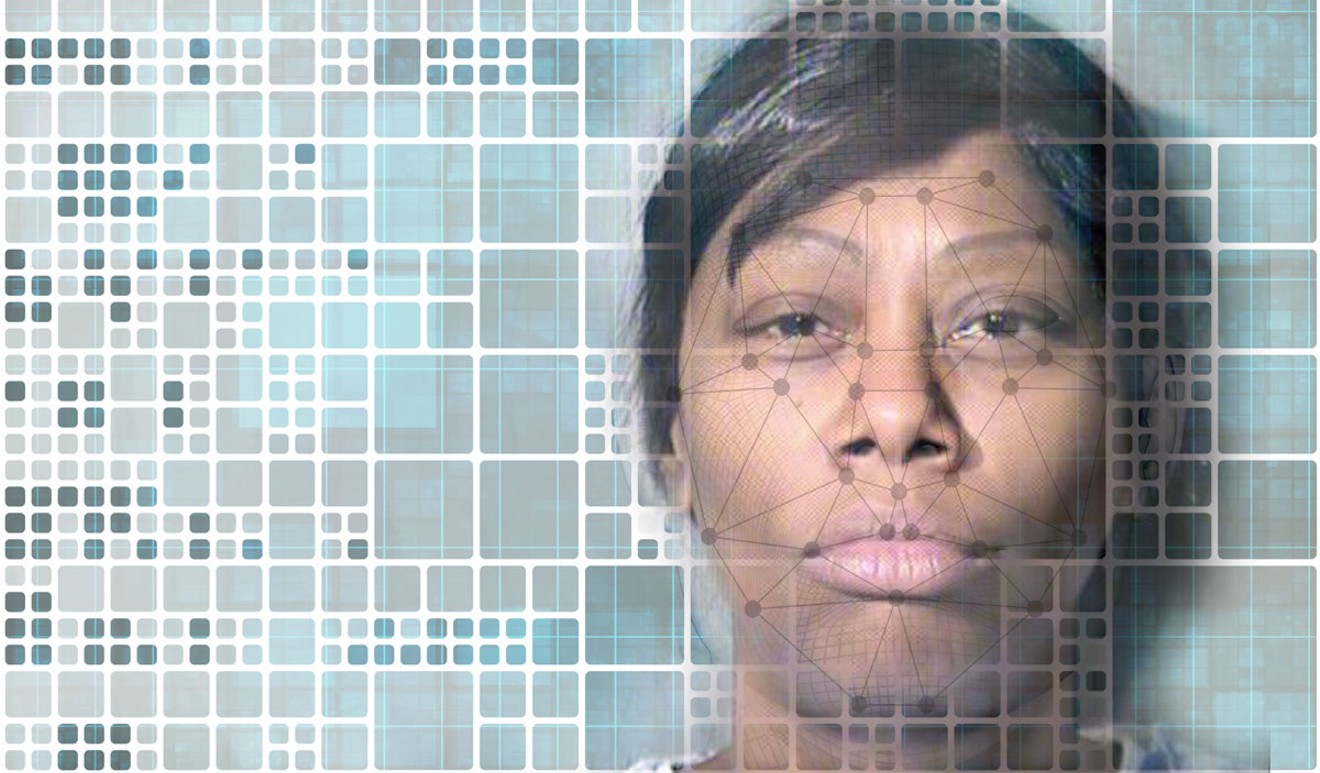 ADOT's facial-recognition system led to the arrest of fraud suspect Sharon Forrest. This is a simulation of the technology. New Times photo-illustration 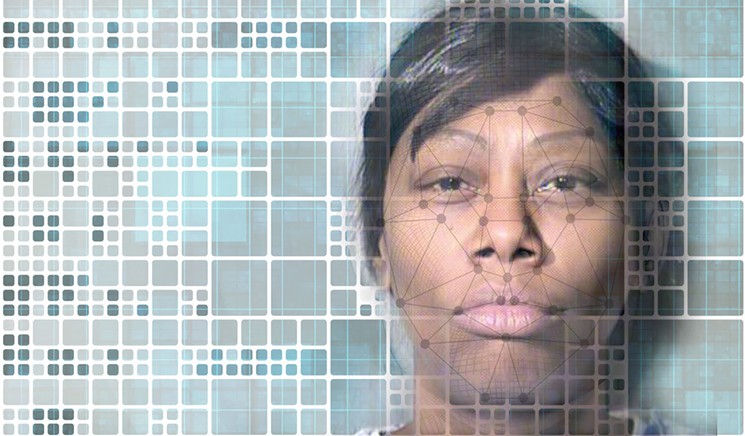 ADOT's facial-recognition system led to the arrest of fraud suspect Sharon Forrest. This is a simulation of the technology.
New Times photo-illustration
When one Casa Grande woman posed for photo at the MVD in February, she must have thought the free cash would start rolling in from fraudulent benefits and settlement payments, according to a court case being built by state investigators.

Instead, she stepped into a digital trap set by Arizona’s Motor Vehicles Division and federal homeland security defenders two years ago.

The trap was built to catch identity thieves. In 2015, the Arizona Department of Transportation set up a $1.26 million facial recognition system. More than two-thirds of the money came from a U.S. Department of Homeland Security grant.

The technology is not just giving the state a new tool against ID fraud; it’s giving a lesser-known squad of state investigators a heavy workload. And it’s quietly yielding results.

Sharon Forrest presumably didn’t know any of that when she lined up in the Casa Grande MVD on February 2. After the camera shutter closed, the computers went to work. The machines found that Forrest’s face, and a comparison of about 85 biometric measurements, matched those of two other people in the system rather too well.

ADOT’s detectives in the Fraudulent Document Unit launched an investigation. Yes, ADOT has detectives. They work in the Office of Inspector General under ADOT’s Enforcement and Compliance Division. 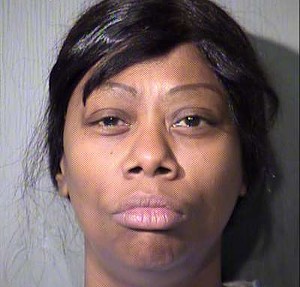 Even the cover page of indictment is revealing. It lists seven aliases, including the colorfully named Velvet.

Velvet, a.k.a. Sharon Forrest, a.k.a. half a dozen other women, has pleaded not guilty to all counts.

ADOT Detective Keith Richerson laid out much of the case against her in his application for a search warrant.

In it, he told a judge that Forrest first obtained the identity of Deidra Lynn Graham in August 2008. She took an Ohio birth certificate, a Visa card, an Arizona marriage license and an AAA employee card to the Avondale MVD. She walked out with an Arizona ID card with her photo and Graham’s name.

Over the next six years, she went back four times to get phony drivers’ licenses from MVDs in Avondale and west Phoenix, the court document said.

Then in January 2016, Forrest went to the Arizona Memorial Coliseum in Phoenix for an event by the Arizona Veterans StandDown Alliance, a group dedicated to helping homeless vets. The event helped vets get government services, including drivers’ licenses.

There, investigators said, Forrest proffered a forged drivers’ license application, which indicated she is a veteran of the U.S. armed services. When they booked her into jail, deputies marked on the intake sheet that Forrest had never served in the military, nor was she homeless. When Richerson contacted the U.S. Department of Veterans Affairs, they told him the same thing.

Forrest wasn’t done there, nor was Richerson’s account in court records.

They show that the Casa Grande woman also first obtained the identity of Eve Christopher Scott in July 2012, when she stepped into a Chandler MVD office with a birth certificate, insurance card, and employee card. Once again, the state issued her an Arizona ID card with her face and Scott’s name.

Two weeks later, she went back to the MVD, this time the South Mountain branch, to get a drivers’ license.

He wrote that she told him: “she has never lived in Arizona or obtained an Arizona MVD credential. Scott identified Forrest as her cousin, who she has not seen in approximately 15 years.”

Then the light went on and dots connected themselves in Scott’s mind. Various companies had sent her collection notices over the prior five years for accounts she never opened. And there was the 2015 DUI arrest in Phoenix.

Richerson got his search warrant for Forrest’s home.

On March 2, investigators said they recovered 19 pieces of evidence, according to court records. His quarry did not conceal the records that would land her in jail.

Ohio birth certificates and a social security card were on the floor by a desk. A drawer in a kitchen cabinet had a stack of documents. On the couch lay a letter from Pinal County Federal Credit Union to Eve Scott. Not far, on the television stand, was a receipt for eyewear in the name of Deidra Graham.

Credit cards and ID documents were all through the house. Six credit cards were in a closet. A pink overnight bag held one more credit card, plus what detectives described as “numerous documents” and an “AZ Veterans StandDown 2016 letter, application,” also in the name of Deidra Graham.

Detectives must have been pleased with their bust. Jailers noted on Forrest’s booking sheet that she had been convicted on impersonation charges and had been arrested for forgery and ID theft as well as on weapons and assault charges.

The court document also claimed she had failed to show up in court and “has used numerous identities to avoid law enforcement detection.”

ADOT explained the arrest briefly in a press release last week, but that release did not tell the whole story about the case, nor if fits a much wider pattern of investigation.

“As the agency that issues identification cards, we’re serious about protecting Arizonans’ identities,” said Michael Lockhart, chief of the Office of Inspector General, said in the release. “This system helps us to do just that.”

He went on explain that with facial recognition, detectives, who are specially trained by the FBI, can compare any photo in MVD’s database against any other.

Said ADOT: “If a photo is a likely match to another one, the system will flag it. Potentially fraudulent photos then undergo three levels of review by detectives.”

“Humans are involved at every level of facial recognition technology,” Lockhart said. “We make sure we’ve got solid evidence before advancing one of our cases. This is not a science-fiction scenario where the computer determines potential fraud all by itself.”

What ADOT did not say is how common these cases are becoming.

In December, ADOT issued another release, saying its "science fact" facial recognition software had netted two other cases, and as the headline suggested, “ADOT’s battle against ID theft extends beyond Arizona.”

The release said the system flagged a Phoenix man who had “used the stolen identity for years to hide from violent crimes committed in Illinois, Indiana, Georgia, Tennessee, and Florida, where he faced an extraditable felony warrant.”

That’s just one pixel in a much larger mosaic.

ADOT spent the better part of two years searching matches on “every photo in our system,” Harding said, guessing that the number of images was in the millions.

“It yielded a bunch of matches,” he said, adding ADOT opened about 9,600 cases. “We wanted to use it to cut back on fraud and identity theft.”

But he noted there are other applications.

When highway patrol officer Ed Anderson was ambushed during a roadside stop in January along Interstate 10 in Tonopah, nobody knew who his attacker was after a passer-by gunned him down.

The Department of Public Safety sent the dead man’s fake ID to ADOT detectives, who ran it through NeoFace. It didn’t turn up anything because he had no documented history in Arizona, Harding said.

It’s easy to imagine other uses, in a border state with strict voter ID laws, busy smugglers, and a large population of undocumented workers. Nobody has asked ADOT yet for help investigating potential voter fraud or immigration enforcement.