Officials say that with the help of an airplane and two new unmarked patrol cars, state troopers will pull over motorists in these zones who are going just a few miles per hour over the posted speed limit. They'll also target any drivers making hazardous or otherwise illegal maneuvers.

For the time being, the corridors are limited to:

• 4 miles of Interstate 10 in downtown Phoenix

• 23 miles along Interstate 40 near Kingman in northwest Arizona

So far, ADOT has installed the signs on I-10. The U.S. 60 signs are expected to be up by the end of this week, the I-40 signs by the end of January, according to ADOT spokesman Doug Pacey.

More serious collisions caused by speeding, aggressive driving, impaired driving, and lack of seatbelt use occur in those sections of road than anywhere else in the state, Pacey says.

Pacey says ADOT decided to go with two urban corridors and two rural ones and chose Phoenix over Tucson because Phoenix's urban areas have far more traffic volume and associated crashes than Tucson's. After evaluating the program over the course of a year or two, the state may may install additional safety corridors.

How, precisely, DPS will carry out the program remains to be seen. DPS doesn't expect troopers to write more citations than they normally would, and it's not as if the officers haven't already been enforcing the violations they witness, says DPS spokesman Quentin Mehr. Although the agencies involved in safety corridors clearly want the public to believe troopers may be more likely to pull them over for speeds that previously might not have warranted a stop, Mehr says "no direction has been given in regards to the exact speed for a trooper to stop a motorist, as different situations will determine what speed will be enforced."

What will change, he says, is the type of violations troopers focus on: They'll be more interested in "hazardous violations" like speeding, unsafe lane changes, and tailgating. 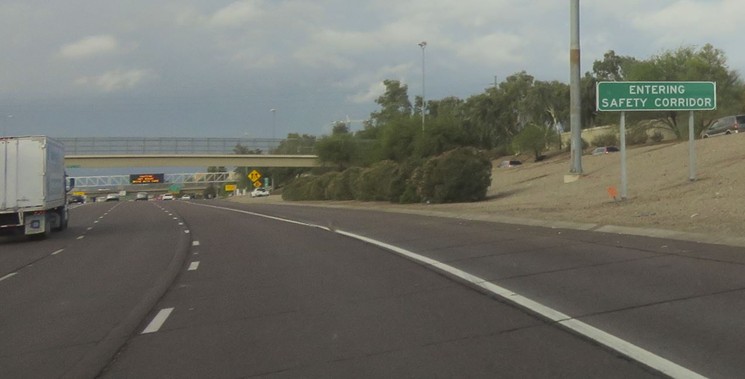 Part of the new Safety Corridor on westbound I-10 in downtown Phoenix.
Ray Stern
As officials describe it, the program is not a traditional speed trap. The corridors will raise no revenue for DPS, Mehr asserts. Nor will it cost the DPS anything, because it is fully funded by a $120,000 grant from the Governor's Office of Highway Safety (which itself was made possible with federal funds).

The grant covers any "potential overtime" and the costs of putting additional troopers in the safety corridors. But how many extra troopers will go in the corridors and where they'll come from isn't entirely clear. Mehr says it's already "standard practice" to deploy troopers in the areas with the highest amount of collisions. He adds that no DPS officers will be pulled from other areas into the safety corridors; municipal police officers won't assist with the highway and freeway effort, either.

The grant does cover costs for aircraft-assisted patrols along the corridors, which have been "very successful in the past," Mehr says.

The two unmarked police "interceptors" will roll near Kingman and on I-10 in Phoenix, he says — they were part of the DPS Highway Patrol budget for 2017 and were originally intended to combat aggressive driving but were transferred to the safety-corridor program when it was developed.

"These vehicles will be a valuable tool in observing hazardous, collision-causing violations," Mehr says.

Arizona speed limits, in some cases, can be considered suggestions, owing to the state law requiring that motorists keep their speed "reasonable and prudent" on the highway, as opposed to requiring strict obedience of speed-limit signs. Yet many exceptions exist: Posted speed limits are, in fact, the actual limit in school zones, in 25 mph residential areas, and for anything in excess of 65 mph except when the posted speed limit is higher. In 55 mph sections on Arizona freeways and highways, officers are always free to write a "wasting a finite resource" ticket for going 60 or 65 — a holdover from the nation's energy-conservation days.

Chris Rike, a local defense attorney who handles traffic cases, says motorists shouldn't expect success with a "reasonable and prudent" argument if they get pulled over in a safety corridor. 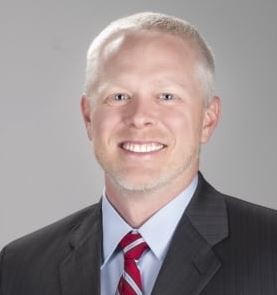 Attorney Chris Rike
Courtesy of Chris Rike
Police can and do sometimes pull over drivers for going one or two miles per hour over the posted limit — Rike says it has even happened to him. Typically, he says, when officers do that, they're making a "pretext" stop to check if the driver is impaired, or for some other reason unrelated to speeding. With the new safety corridors, drivers might be able to beat a "zero tolerance" speeding ticket in court but probably won't win the argument with the trooper on the side of the road.

Once in court, a civil speeding citation is tough to beat, Rike says, because the standard of evidence in a civil case is "preponderance of evidence" of guilt, not the "beyond reasonable doubt" standard of a criminal case. It's probably not worth it to hire a lawyer in a civil speeding case, he admits. But fighting a criminal speeding ticket with a lawyer at your side might make sense, he says, especially if the motorist is in danger of losing his or her driver's license.

Arizona is actually somewhat behind the times on safety corridors, which more than a dozen other states have used for nearly two decades. According to a 2008 study by Iowa State University's Center for Transportation Research and Education, the program is likely to be successful.

"Safety corridors can generally provide positive results by improving safety and driver performance in selected roadway sections, particularly when coordinated with local safety professionals and with an emphasis on public awareness," according to the report.

Best of all, the report goes on, the programs are "excellent" and cheap tools to show the public that authorities are doing something about problem drivers, and they can be used until "more costly solutions are being developed and funded."

Below: ADOT's info-graphic on Safety Corridors 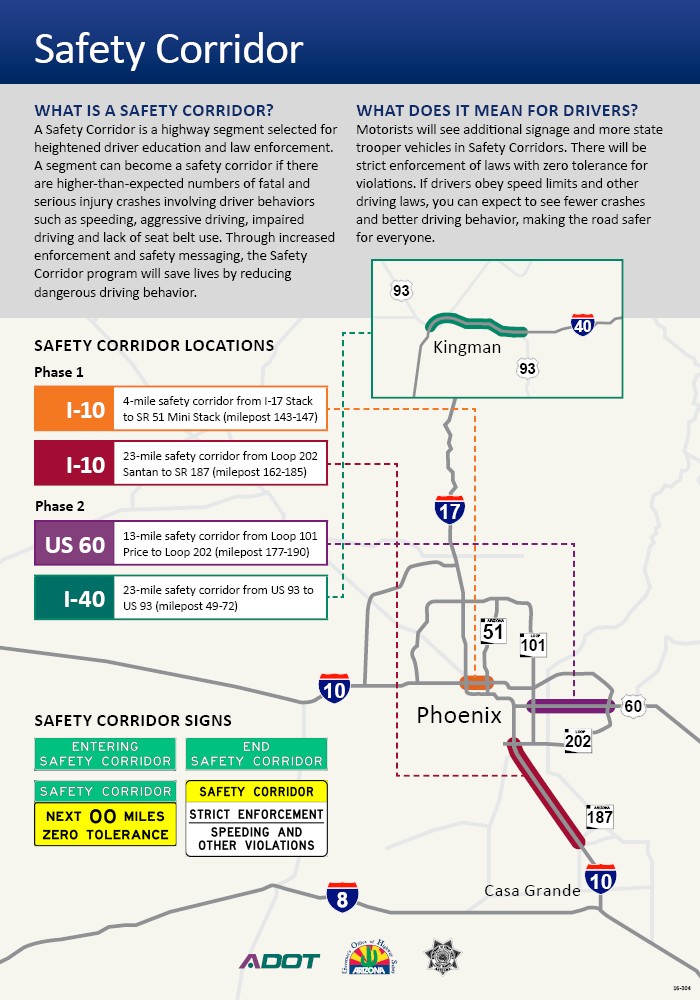 Arizona Department of Transportation
KEEP PHOENIX NEW TIMES FREE... Since we started Phoenix New Times, it has been defined as the free, independent voice of Phoenix, and we'd like to keep it that way. With local media under siege, it's more important than ever for us to rally support behind funding our local journalism. You can help by participating in our "I Support" program, allowing us to keep offering readers access to our incisive coverage of local news, food and culture with no paywalls.
Make a one-time donation today for as little as $1.