Ex-Mesa officer Philip Brailsford showed little emotion on Thursday immediately after he was found not guilty on all counts in the January 2016 shooting death of unarmed suspect Daniel Shaver. Court pool camera (Channel 12)
(UPDATE with body-cam videos below)

Philip Brailsford, a former Mesa police officer, was found not guilty of second-degree murder or reckless manslaughter on Thursday.

Brailsford, 26, didn't react as the two verdicts were read in Maricopa County Superior Court. His lawyer, Michael Piccarreta, patted him on the back.

Brailsford was one of six officers called to a Mesa motel on January 18, 2016, after someone reported seeing the barrel of a rifle sticking out of a window.

He and the other officers took up positions around the fifth-floor room occupied by Daniel Shaver, 26, a pest-control technician from Nashville, Tennessee.

As the jury learned, Shaver had invited a man and woman up to his room for drinks before police got there, and was showing them an air rifle he sometimes used to kill birds. The other man eventually left, leaving just Shaver and the woman in the room.

Excerpts of Brailsford body-cam footage can be seen on YouTube; a judge ruled that the shooting sequence could be edited out of the public version.

One of the officers called loudly down a hallway for the "female to step out," warning that he might send in a dog.

In the parts not shown, but described by authorities, the officers ordered the occupants to crawl out of the room on their hands and knees. When Shaver came out — unarmed — he moved a hand toward his waistband, perhaps to pull up his shorts. 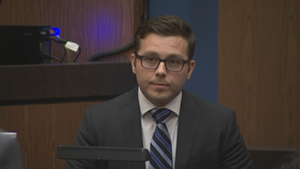 The shooting came at a time last year when the American Civil Liberties Union and Black Lives Matter had been pressing police agencies around the country to ease up on deadly use-of-force tactics. Both Shaver and Brailsford are white, but the verdict was being watched closely by police watchdog and civil-rights groups.

Mesa police fired Brailsford a few weeks later for performance issues, and also because the officer had "You're Fucked" engraved on his rifle's dust cover. (Apparently, that hadn't been seen as a problem before the shooting.) He had been with the force almost three years.

Bill Montgomery, Maricopa County Attorney, decided in March 2016 to move forward with a second-degree murder charge against the officer.