"That was true haha working in the kitchen I read it," wrote one woman, Gina Diaz.

The Facebook comments, which were leaked to Phoenix New Times, responded to the posting of a KGUN9 story, which cited a New Times story about such food being served in Arizona prisons. 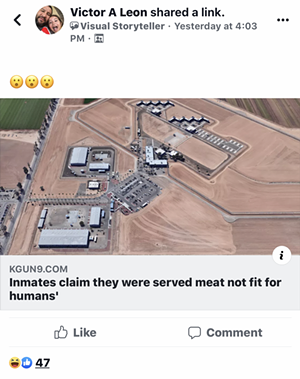 The post that sparked it all.
New Times source
For that story, which was published Wednesday, the Arizona Department of Corrections told New Times that it had reviewed such allegations and found "no evidence" to support them.

Comments by several correctional officers in the private Facebook group indicate otherwise. Others who weighed in declared that the claims were rumors or that although some food arrived in prisons that was marked "not for human consumption" or that was clearly spoiled, it was never actually served.

The Facebook group, AZ Correctional Officers United, has about 3,700 members who are most likely correctional officers, family, and friends, based on the group's description. Its stated goal is to demand pay raises.

New Times checked the names of commenters with the Arizona Republic's database of state employee salaries. While a few of those names were not listed in the database, many matched the names of state corrections officers. New Times is including comments only from the latter.

Among them were Gina Diaz, the woman who wrote "this is true haha," and John Gari, Rubi Hernandez, Randy Stewart, and William Castro.

Hernandez, who "worked the kitchen," wrote, "The officers eat this food too why are they complaining."

Stewart merely wrote, "As a Kitchen officer, I plead the Fifth," in an apparent reference, serious or not, to the Fifth Amendment, which allows a person to remain silent to avoid self-incrimination. 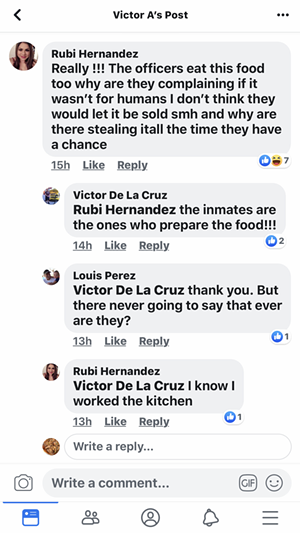 One corrections officer, David Jumper, diverged from his colleagues. "Yes there are [sic] some spoiled meat," he wrote, but it "wasn't fed to the inmates."

New Times source
Other comments were not specifically about the food. Instead, they ridiculed incarcerated people and life on the inside.

"Geez what's next ... not getting enough gb for your free tablet," sneered Kong Nguyen, whose name also appears as a corrections officer.

When New Times asked the Department of Corrections to respond to the claims made by these corrections officers and verify their employment with the department, spokesperson Andrew Wilder did not directly address those questions.

"The safety of our inmates and corrections officers is a top priority, and we are taking these allegations very seriously," he said in an email.

"We are working diligently to get to the bottom of these claims and will continue to take all and any action as needed to ensure the health and safety of all inmates, staff, and correctional officers," he wrote.

The ADC later added that "the Facebook comments are part of the Inspector General's fact-finding effort."

Trinity has until Monday to send ADC a written report with the findings of its investigation.

New Times source
KEEP PHOENIX NEW TIMES FREE... Since we started Phoenix New Times, it has been defined as the free, independent voice of Phoenix, and we'd like to keep it that way. With local media under siege, it's more important than ever for us to rally support behind funding our local journalism. You can help by participating in our "I Support" program, allowing us to keep offering readers access to our incisive coverage of local news, food and culture with no paywalls.
Make a one-time donation today for as little as $1.
Elizabeth Whitman was a staff writer for Phoenix New Times from March 2019 to April 2020.