Juked, Barked At and Blocked: So You Want to Be an Arizona Rattler? 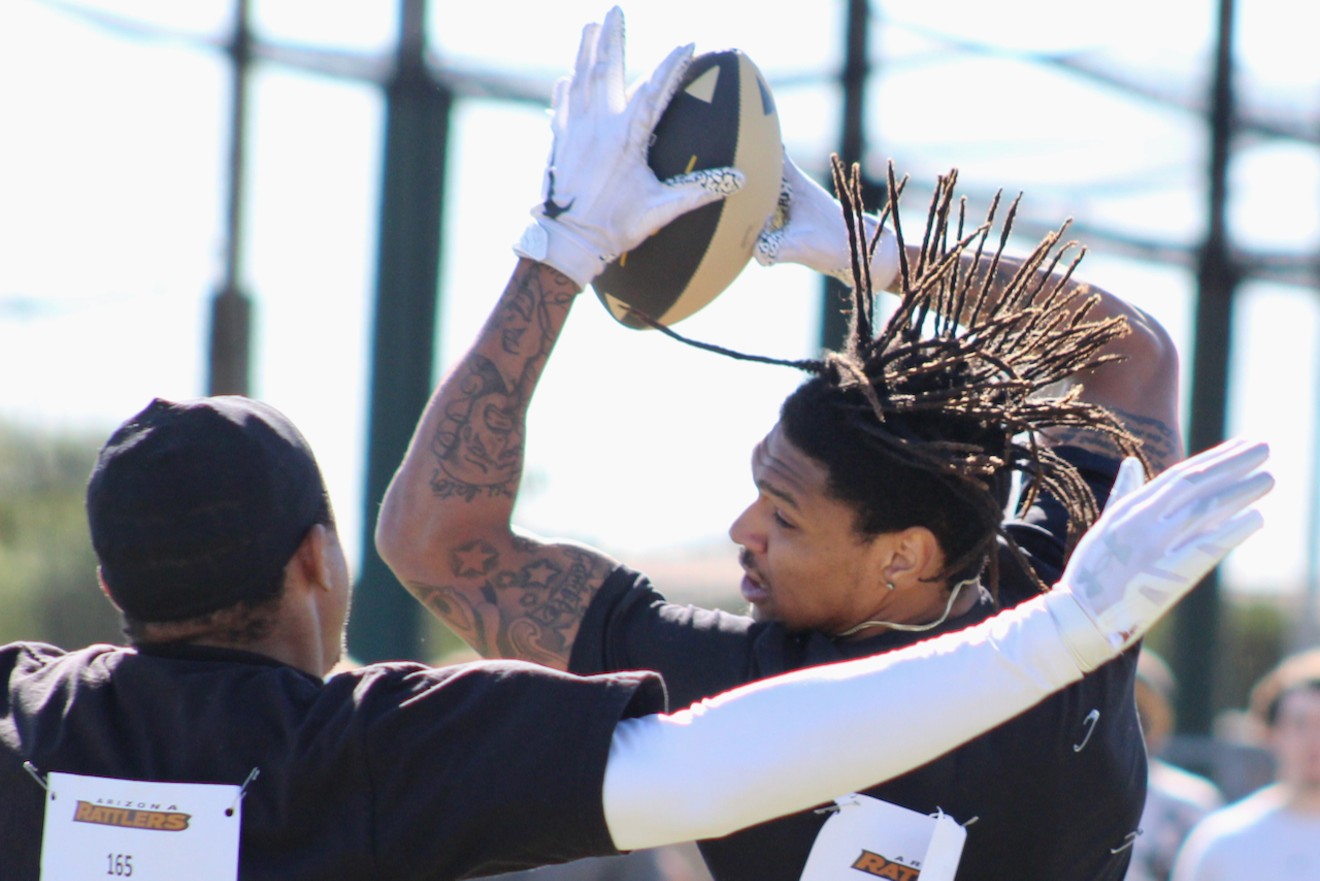 But only one of nearly 4,300 high school football players will ever see a play with a professional team — which is only a little better than the odds of getting struck by lightning. At the Gene Autry Sports Complex in Mesa on November 19, that dream was alive for nearly 100 aspiring players from all walks of life.

The Arizona Rattlers, an Indoor Football League franchise that plays in Phoenix, held its annual open tryout ahead of the 2023 season. A throng of athletes showed out with hopes of impressing veteran coach Kevin Guy and his new staff. Only two or three will make the cut.

“The turnout was a lot bigger than usual,” team spokesperson Brandon Duenas told Phoenix New Times. “There were over 90 participants, which is the most they’ve had in recent years.”

The Arizona Rattlers are the winningest arena football team ever. Maybe that's why the Rattlers' open tryout drew record numbers. 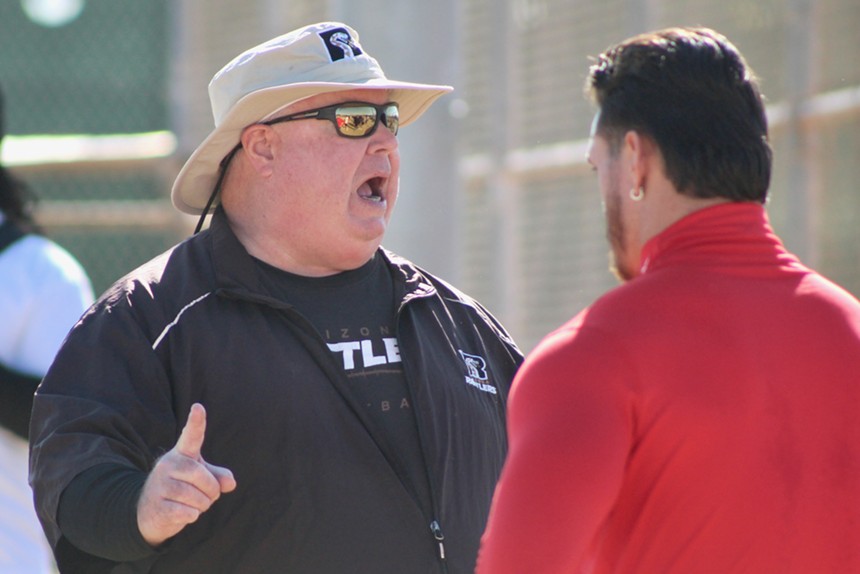 Jeff Jarnigan, defensive line coach for the Rattlers, during the open tryouts at the Gene Autry Sports Complex in Mesa.
Elias Weiss

On that mild November morning in east Mesa, defensive line coach Jeff Jarnigan barked at a herd of big men to attack a row of blocking sleds. On an adjacent field, quarterbacks slung chunky gold-and-blue leather footballs downfield, and receivers did their best to burn a speedy secondary. Playmakers vied for Guy’s attention over a caterwauling of excited whoops and hollers. “Did you see me, coach? Did you see that catch?”

Guy, the head coach since 2008, told New Times, "It was a terrific turnout overall.” Guy is the longest-serving head coach in the league. “I loved the competition and skill sets that were brought to the table,” he said. “It's always a pleasure to coach up young men that are hungry and trying to further their professional careers, whether it's with us or somewhere else."

With so much competition on the field, one mistake was enough for some to throw in the towel. A cornerback went face-first onto the ground after a receiver juked him to haul in a touchdown reception. Pugnacious challengers formed a circle around the spurned defender, jeering as he covered his face with a hooded sweatshirt and exited the gridiron, never to return.

Some hopefuls had played on indoor football teams before. A few even played in the NFL. Others hadn’t played since high school. Some were just 18 years old, while others were older than 40. Some participants were from the Valley; others came from across the country.

Melissa Strother was the only woman to take part in the tryout, going up against three men for a chance to be a kicker. A versatile player, Strother played professional women’s football for 13 years as a wide receiver, free safety, and special teams operator. Last year, she played in the smaller Champions Indoor Football league.

“Eleven months ago, I decided to focus all my time on kicking to see how good I could be if I actually trained at it,” she said.

Strother, 40, flew in from Los Angeles for the tryout. Others came from farther away: New Mexico, Texas, Colorado, and even Massachusetts.

“If I make the team, I am definitely moving to Phoenix full-time,” Strother said. Her career long in a professional game is 32 yards, but she was nailing 50-yarders in practice. That’s the length of an entire arena football field.

People came from California, New Mexico, Texas, Colorado and even Massachusetts to try and snag a spot with the Rattlers.
Elias Weiss

‘The Best in the League’

"Downtown Phoenix continues to grow, and the Rattlers [are] an integral part of the entertainment that the Suns and the Mercury are providing the local community," team owner Ron Shurts said in a prepared statement.

Arena football cropping up in popular culture is indicative of a sport that is growing its influence. While some speculate the NFL is experiencing a gradual decline in popularity, arena football is expanding. Sports Illustrated found that arena football is increasingly influencing the NFL, not the other way around.

Since the long-standing Arena Football League folded in 2019, the IFL now is the largest and longest-running indoor football league in the world. The Rattlers are tied for the most chips in that league with six and have been to more championship contests than any other team. Phoenix is also the largest city to host an IFL team — far larger than other host cities such as Prescott Valley, Tucson, and Sioux Falls, South Dakota.

The team’s average attendance of more than 12,000 also leads the league. 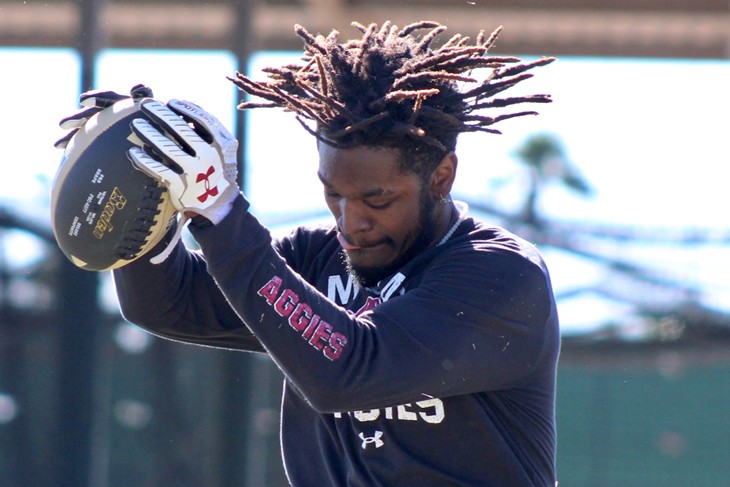 Taylor is a success story from the team's open tryout in 2021. The 28-year-old Peoria native was only 4 feet, 11 inches tall when he entered Mountain Ridge High School in Glendale. Hopes of a pro football career were dim.

But Taylor wound up hitting a growth spurt and reaching 5 feet, 11 inches, and playing football at Northern Arizona University and later Arizona State University. That catapulted him to workouts with the Detroit Lions and pro indoor football contracts on the East Coast. When the coronavirus pandemic hit, the contracts fell through, and he was forced to swallow his pride after he was rejected during the Rattlers’ 2020 tryout.

Taylor, though, gave it one more go, and it paid off. He earned a spot on the Rattlers' roster after dazzling Guy at the tryout in 2021. Since then, he’s been a rising star as a defensive back for the franchise, leading it to a 14-4 campaign last year, winning the Western Conference and a postseason game. And he played an integral role in this year’s open tryout — choosing which players made the cut and which ones were sent packing.

“Being in the position I was in at the tryout last year, they know I know what it takes to win in this program,” Taylor said. “They believed in me to encourage those guys who feel like they’ve been overlooked and their career is over with. It’s the definition of a blessing.”

The Rattlers open their season on March 17.
Elias Weiss

IFL players earn an average salary of $37,470 per four-month season, but that’s hardly a deterrent. Taylor said his fans watch the Rattlers more than they do the Arizona Cardinals. Why? Because the team just doesn’t stop winning.

“We have a winning culture. Coach Guy does what it takes to win,” Taylor said. “We want to keep winning for the city. We don’t want to let the fans down because they never let us down.”

Taylor couldn’t share which players he tapped from the tryout but noted that, “There was a lot more talent than I expected.”

“They’re going to bring great knowledge, fire, and passion to the game,” Taylor said. “They both played and won with the Rattlers. Once a Rattler, always a Rattler.”

Recruiting and retaining Arizona-grown talent is part of what has made the Rattlers so successful during his 15-season tenure, Guy said.

“Their experience on and off the field makes them exciting additions to our staff that will help us win football games. They understand our culture and the Rattler way," he added.

The Rattlers open their season on March 17 against the Quad City Steamrollers in Moline, Illinois. Their first home game is slated for April 8 against the Tucson Sugar Skulls, which is co-owned by Guy's wife Cathy, at the Footprint Center.
KEEP PHOENIX NEW TIMES FREE... Since we started Phoenix New Times, it has been defined as the free, independent voice of Phoenix, and we'd like to keep it that way. With local media under siege, it's more important than ever for us to rally support behind funding our local journalism. You can help by participating in our "I Support" program, allowing us to keep offering readers access to our incisive coverage of local news, food and culture with no paywalls.
Make a one-time donation today for as little as $1.
Elias Weiss is a staff writer at the Phoenix New Times. A native of Charlotte, North Carolina, he reported first for the Northwest Arkansas Democrat-Gazette and was editor of the Chatham Star-Tribune in Southern Virginia, where he covered politics and law. In 2020, the Virginia Press Association awarded him first place in the categories of Government Writing and Breaking News Writing for non-daily newspapers statewide.
Contact: Elias Weiss
Follow:
Twitter: @ecweiss