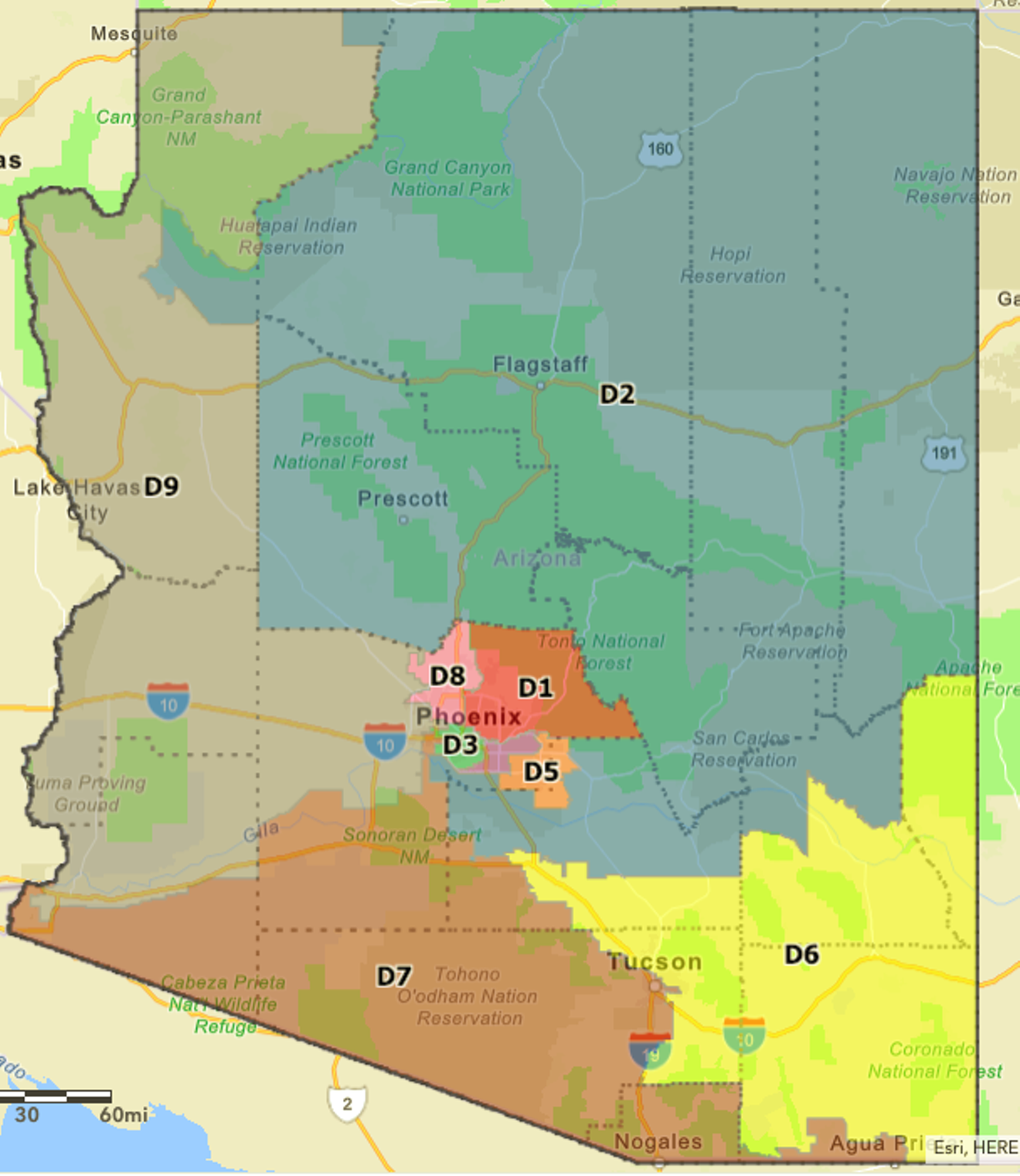 The approved map for Arizona's U.S. House of Representatives delegation for the next 10 years. Arizona Independent Redistricting Commission
Republicans are poised to have majority control in the Arizona legislature and dominate Arizona's delegation in the U.S. House of Representatives for the next decade as freshly approved voting maps may sway power.

After more than 100 public meetings and countless hours of debate among those on the bipartisan redistricting commission, critics question whether the final maps are fair.

Some suggest that gerrymandering, the drawing of districts to unfairly favor one political party, snuck into the process.

The Arizona Democratic Party claims the redistricting commission and specifically, the independent chairperson delivered the GOP "the gift of the most imbalanced gerrymandered congressional map that Arizona has seen in a generation."

The next decade could yield a legislature with even more conservative lawmakers likely to propose a variety of new laws whether anti-immigrant, further restricting access to abortion, or banning topics in public schools. Democrats argue that Arizona's GOP has been a "proving ground" for more alt-right politicians who align themselves with Donald Trump and his ilk.

The Princeton Gerrymandering Project found that both maps favored Republicans to varying degrees, earning the congressional and legislative maps letter grades of C and B respectively. But the drafted congressional maps in late October had earned an A from the Ivy League research group meaning that the final maps were more partisan.

The new maps caught the attention of former U.S. Attorney General Eric Holder, who served under President Barack Obama. Holder predicted that the Arizona maps will be challenged in court.

"The (commission) has disregarded a legacy of fairness & catered to Republicans at every turn — at the expense of Arizonans," Holder said on Twitter. "The chair has a duty to ensure a fair process and not side with Republicans or push a partisan agenda. Anything less than maps that are fair will be challenged." The approved map for Arizona's U.S. House of Representatives delegation for the next 10 years.
Arizona Independent Redistricting Commission

Arizona's current representatives in the U.S. House skew bluer — Democrats have a slim majority with five seats compared to four held by Republicans. But the next election may yield Republicans six seats leaving
Democrats with three. Two districts are highly competitive with a vote spread of less than 3 percent.

Mapmakers started from scratch so elected officials may be running in different districts but generally would represent similar geographic areas.

Every 10 years the state's U.S. congressional and statewide legislative districts are redrawn to adjust to the latest U.S. Census, as voters mandated. Last year, the redistricting commission had to figure out how to reapportion seats to represent 7.1 million Arizonans.

Consultants carved out new districts meant to have roughly the same population, stay compact in size and represent communities of interest.

More than 4.2 million voters registered for the last presidential election in November 2020 split into four major groups. There were 1.3 million Democrats, 1.5 million Republicans, 1.3 million independents, and 38,385 Libertarians in Arizona.

"I think you could consider us a purple state. But we're still centrist and Republicans have the biggest registration numbers in the state. But we're trending purple, but not even solidly purple," said Chad Campbell, Democratic strategist in Phoenix. "This process is inherently difficult, There's no easy way to do it."

To ensure that voters are represented by roughly equally populous districts, voters from cities such as Phoenix and Tucson are blended with voters in rural and suburban areas, despite often conflicting political views.

The Arizona Independent Redistricting Commission — which oversees the process — has two Democrats, two Republicans, and is led by a chairperson registered as an Independent.

Critics blame chairperson Erika Neuberg, who was previously registered as a Republican, for favoring changes to the maps pushed by Republicans on the committee, voting alongside conservatives for district maps of their choosing, and giving public maps submitted by conservative groups more weight.

During a mid-December meeting, Republican David Mehl pushed back on maps submitted by the Arizona Latino Coalition for Fair Redistricting, claiming that they gave Democrats an unfair partisan advantage.

But progressives complained about fairness too.

"One of the concerns that we had going into this was that Governor (Doug) Ducey stacked the committee (with Republicans)," said Tomas Robles Jr., executive director of Living United for Change in Arizona, or LUCHA, a social justice organization active in election policy for progressive causes.

By contrast, commission members considered suggestions submitted under the name of a business group without attaching a partisan label.

The Southern Arizona Leadership Council map was created by the second vice chair of the Pima County Republican Party.

"Therein lies the hypocrisy of the members of that committee...we still lose voters (in those Latino Coalition maps). It's highly concerning that they can call our maps partisan but the other maps are not," Robles said. "Our goal has always been to mitigate any potential losses because we feel that the commission skews more to the right than we are comfortable seeing."

Rebecca Rios and Reginald Bolding Jr., Arizona Senate and House Democratic leaders, echoed those concerns, noting that Latinos, in particular, were underrepresented in some voting blocs. But then overpacked in legislative District 24, which includes some of Glendale and Phoenix's majority Latino Maryvale neighborhood.

"Throughout the mapping process, the chairwoman has repeatedly sided with Republican commissioners as maps were discussed," according to a joint letter from the Democrats.

The independent chair, while denying favoritism, voted alongside Republicans each time except twice.

The approved map for Arizona's state legislature for the next 10 years.
Arizona Independent Redistricting Commission

Maps even ruffled the feathers of the Republican Party in Arizona, as representatives called for the districts to become more competitive at the ballot box. Republicans grumbled that some communities of interest were split up for partisan reasons. For example, the Scottsdale area McCormick Ranch area was split between Legislative District 4 and District 8 in drafts and the final map, instead of just District 4.

Meanwhile, in draft maps, Legislative Districts 2 in Deer Valley and 4 in Scottsdale were overpopulated, while District 28 in Sun City West and more rural areas North of Phoenix was underpopulated. Deer Valley ended up with 246,674 residents while the largely Scottsdale district had 244,298 voters and Sun City area had 228,803 voters in the final maps.

One community organization accused the commission of ignoring input from marginalized communities in Arizona when creating the new districts.

"It is clear the commission failed to incorporate the input Arizona's communities shared during every part of the process," said Victoria Grijalva Ochoa, redistricting program manager of One Arizona after the vote. "Some stakeholders had the opportunity to directly influence district lines without challenge, while others were not given remotely the same opportunity. We cannot help but feel as though the (commission) only paid lip service to our communities throughout this process."

Ochoa said before the vote that the Latino population is growing in Arizona.

"Political power should reflect that," she said. "We should be able to have fair representation."

It's unfair and not representative when voters are 'packed' in a district when a big chunk of voters usually minorities are segregated. Ochoa said one example of a packed district is Legislative District 24 in the city of Glendale and Maryvale neighborhood where 51 percent of registered voters are Hispanic. Or the potential dilution of Latinos as voters in Congressional District 3, South Phoenix Laveen, Maryvale, and downtown Phoenix, when the majority white community of Peoria was recommended to be included but stayed in District 8 in the final maps.

Ultimately, out of nine congressional districts, two are very competitive, while the remaining seven districts voted solidly for either Republicans or Democrats. Latinos have the voting majority in two out of nine congressional districts —- District 3 in Phoenix and District 7 along the U.S.-Mexico border to Yuma — and historically both areas have overwhelmingly voted for Democrats.

Organizers say it was a massive lift to even have tribal members participate in the process. Rural communities live far from meeting locations and many don't have access to the internet to submit a public comment during the redistricting meetings. Ultimately the commission merely paid "lip service" to native communities, activists complained.

"It's no secret that we have people working against black and brown people and Indigenous communities," said Jaynie Parrish, executive director of the Navajo County Democrats. "Tribes have worked so hard to get fair representation even though we're a smaller population but we can't go backward."

Since it only happens once a decade there's a gap in information about what exactly it is anyway, she said.

Parrish said she was most concerned about congressional District 2 on the new maps, which covers a large swath of rural Arizona from south of Phoenix to Prescott and Flagstaff, as an example where native voters are washed out.

About 21 percent of the district's voters were Native American but the district elected Republicans in the past nine elections.

Democrat O'Halleran represents what is now District 1 and is running for re-election under District 2 next year.

"That's where you see the diluting," Parrish said. "We don't want to break up native voting power."

Lawsuits are likely to challenge these maps both insiders and outsiders say.

"Process is not as important as results. A commission is just a process, fair maps is a result," said Marc E. Elias, attorney at Elias Law Group and founder of Democracy Docket which focuses on election law. "The Arizona redistricting process did not succeed if its goal was to enact fair maps. I would anticipate that you will see litigation against those Arizona maps in the coming days and weeks."

KEEP PHOENIX NEW TIMES FREE... Since we started Phoenix New Times, it has been defined as the free, independent voice of Phoenix, and we'd like to keep it that way. With local media under siege, it's more important than ever for us to rally support behind funding our local journalism. You can help by participating in our "I Support" program, allowing us to keep offering readers access to our incisive coverage of local news, food and culture with no paywalls.
Make a one-time donation today for as little as $1.
Kristen Mosbrucker is a journalist who hails from the Northeast but has spent much of her career over the past decade across the South. She has interviewed everyone from business executives to homeless folks. She's covered business on the Texas-Mexico border in deep South Texas for the McAllen Monitor, technology and the defense industry in San Antonio for American City Business Journals, and the petrochemical industry in Louisiana for The Advocate newspaper. Early in her career, she spearheaded hyperlocal community news coverage for an NPR member station in Philadelphia.
Contact: Kristen Mosbrucker
Follow:
Twitter: @k_mosbrucker