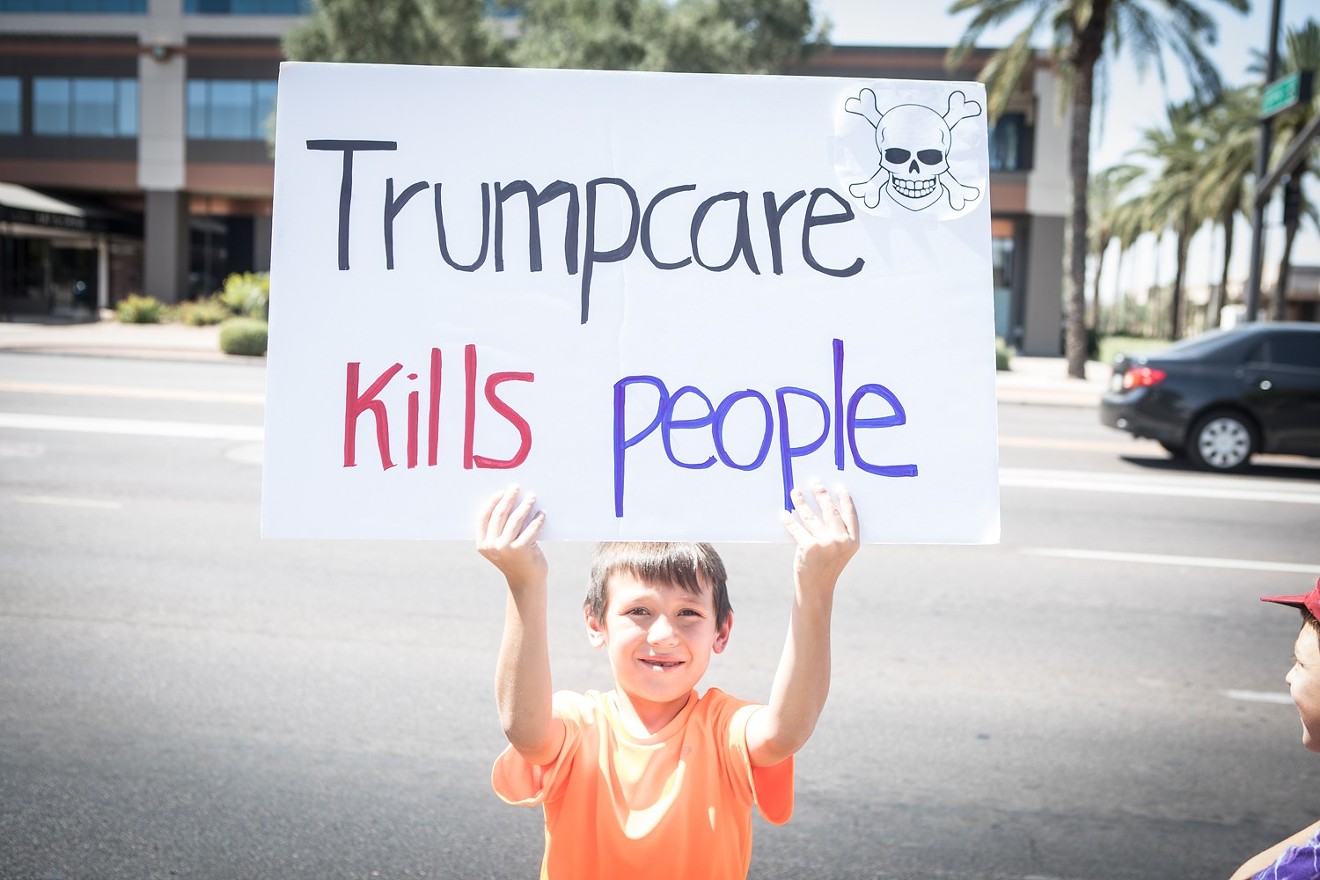 The people of Arizona have sent a message about health care. It seems John McCain has been listening. Jim Louvau


Almost a month ago, I suggested that one of my two favorite Republican Arizona senators, John McCain, should do whatever it takes to delay a vote on this train wreck of a health care bill.

“All I'm asking is that you not march in lockstep with the Senate's Republican leadership,” I wrote. “Make sure it is the bipartisan bill that you demanded in 2009. Make sure it is a bill that benefits all Americans, not just Big Pharma and the insurance companies.”

I also wrote that McCain should show that he still has some “clout.” He was just one vowel short of taking me at my word, literally. He developed a “clot,” which he had removed from above his left eye on Friday, according to a statement from the Mayo Clinic in Phoenix.

“Surgeons successfully removed the 5-cm blood clot during a minimally invasive craniotomy with an eyebrow incision,” the clinic said in a statement Saturday night. “Tissue pathology reports are pending within the next several days.

“The Senator is resting comfortably at home and is in good condition.”

That prompted a tweet from Republican Senate leader Mitch McConnell with this statement:

“While John is recovering, the Senate will continue our work on legislative items and nominations, and will defer consideration of the Better Care Act,” McConnell wrote.

In other words, the Republicans didn’t have the votes to pass its health care bill.

Senators Rand Paul of Kentucky and Susan Collins of Maine already had announced that they would not support the bill, which the Congressional Budget Office estimated would leave only 22 million Americans without health care, as compared to the 23 million who would lose their benefits under the version passed by the Republicans in the U.S. House of Representatives.

(I half expected to see this headline on Fox News: "Republicans Save Health Care for 1 Million Americans.")

McCain’s office said Saturday, “On the advice of his doctors, Senator McCain will be recovering in Arizona next week.”

He can’t vote from Phoenix. You do the math.

The people of Arizona have sent a message about health care. It seems John McCain has been listening.
Jim Louvau
There are 52 Republican senators. All 47 Democrats in the senate, plus whatever Bernie Sanders is, announced that they would oppose the bill. Without McCain, the Republicans don’t have the 50 votes they need to let Vice President Mike Pence put the lives of millions of Americans in jeopardy by casting the tiebreaker.

That became even more apparent Monday night when two more senators, during the delay caused by McCain's illness, announced that they would not support the bill. The effectively was the death of Republican health care.

You didn’t know that one tiny blood clot could wreak so much havoc.

But it can, and I’m going to stop being facetious for a moment.

A blood clot killed one of my best friends. I’ve developed them twice after surgeries. They are scary little bastards.

They also usually require weeks of blood-thinner treatments, which can be a bit painful.

I wish Senator McCain all the best in his recovery.

But I’m giving McConnell no points for being a humanitarian.

He knew McCain was not solidly behind the bill.

The Arizona senator made that crystal clear last week.

“The revised Senate health care bill … does not include the measures I have been advocating for on behalf of the people of Arizona,” the senator said in a statement released Thursday. “That’s why if the Senate takes up this legislation, I intend to file amendments that would address the concerns raised by Arizona Governor Doug Ducey and other leaders across our state about the bill’s impact on Arizona’s Medicaid system.

“Have no doubt: Congress must replace Obamacare, which has hit Arizonans with some of the highest premium increases in the nation and left 14 of Arizona’s 15 counties with only one provider option on the exchanges this year,” the statement continued.

“But if we are not able to reach a consensus, the Senate should return to regular order, hold hearings, and receive input from senators of both parties, and produce a bill that finally provides Americans with access to affordable and quality health care.”

That’s all I asked of the senator in June: Let’s take our time and do health care right. The senators have the opportunity to do that now. We need to make sure that they do.

I’m just sorry McCain's own health had to suffer to make it happen.