A scene from the state DPS response to the January 24 pursuit incident. Arizona Department of Public Safety
A chaotic 110-mile police chase in January that resulted in a suspect driving off Interstate 17 to his death has resulted in only mild rebukes for two of nearly two dozen state troopers involved.

The internal Arizona Department of Public Safety review released this week shows the January 24 chase was marked by a series of missteps:

No officer took command of the incident.


“Air support should not assume command ... and should not dictate with full authority the actions to be taken..."

Officers mistakenly thought they were following a carjacker.

Confusion reigned as to when the chase became an official “pursuit.”

The review also found that some state troopers, contrary to policy, did not turn on their sirens and lights during the pursuit. Some radios didn’t work.

But the DPS reviewer, Major Jack Johnson, concluded that most officers’ decisions throughout the incident were “reasonable.”

The review had sought to determine whether the troopers involved — including the agency's second-highest-ranking official, Deputy Director Lieutenant Colonel Heston Silbert — overreacted during the incident.

The 35-page report didn't address whether DPS could or should have done anything differently to avoid the death. Agency officials said only that findings were "based on the reasonableness of actions, rather than the correctness of outcome."

"DPS always endeavors to apprehend suspects without incident," DPS spokesman Quentin Mehr told the Phoenix New Times. "The only person that dictated how the incident developed was the suspect. He knew he was evading law enforcement, but continued to do so even with multiple attempts to get him stopped."

In the chase, suspected car thief Bradley Moore, 29, led officers from Gilbert to a spot near Camp Verde before losing control of his stolen pickup, which hurdled the Interstate 17 guardrail and plunged 400 feet down a mountain. Moore was ejected and died. Deputy Director Lieutenant Colonel Heston Silbert
Arizona Department of Public Safety
“During this incident, DPS employees were involved in a fluid and dynamic situation to apprehend what was believed to be a dangerous and violent suspect who had committed numerous felony crimes prior to the incident and while the incident was occurring,” Johnson wrote.

“I find no evidence to suggest that any involved employee acted outside the Department's mission, values, and code of ethics."

Johnson recommended no further action beyond follow-up training on procedures and some changes to policy.

His report called out two officers for “unreasonable” conduct.

One was a trooper who later described what happened on his personal Facebook page. He wrote that the suspect “died a felon, but still feel bad for his family.” The post violated the department’s ethics policy, the report found.

The other was Captain Stephen Harrison. The report said Harrison should have taken command. Instead, he confounded the need to command the chase with orders he subsequently received to let Silbert, his superior officer, "call" the pursuit.

Calling a chase means radioing in updates, not directing the response.

Silbert had wanted somebody to relieve him because he was in an unmarked car. But not everybody knew he was off duty. It was assumed he was in command, resulting in nobody taking charge, the report says.

At the time the incident became a pursuit, the report found, Silbert was in an unmarked vehicle and had no radio. He was communicating via 911 on his cellphone, but other troopers didn't realize that, nor did they realize he was not commanding the pursuit.

Harrison should have taken command of the pursuit, the report concluded. 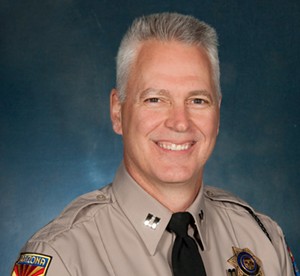 Captain Stephen Harrison
Arizona Department of Public Safety
“This is a unique and awkward decision for Captain Harrison to make due to the rank and command structure of law enforcement and the fact the order would have been given to the second-highest-ranking trooper in the Department,” the report found.

It also criticized Harrison for turning units back instead of calling for more help.

“Additional police support was needed and rather than directing units not to respond, he should have directed them otherwise,” the report found.

In the power vacuum, radio transmissions showed the city of Phoenix helicopter crew, Phoenix Firebird, was asking for guidance.

"‘Since this is DPS jurisdiction, do you want to follow at a distance, or what are you guys thinking?’ No response was provided,” the report said. “This was an important question that needed an answer.”

It never got one.

Instead, Phoenix Firebird urged DPS officers to back off.

The pilot radioed: "I have them all backed off," the report said, adding “multiple units in their investigative interviews (said) that they honored the request of Firebird.”

“Air support should not assume command of a police operation or incident on the ground and should not dictate with full authority the actions to be taken by involved troopers,” the review concluded.

The chase that led to Moore’s death began when Silbert, off duty in his personal, unmarked truck, noticed the man stealing a white Chevrolet truck near Guadalupe and Cooper roads in Gilbert. Silbert called it in.

A Gilbert police officer responded, they conferred, and both agreed to follow the stolen truck. Silbert told Gilbert police dispatchers that there could be two people in the truck. He asked for air support and somebody to set up a traffic break. The dispatcher mistakenly conveyed to Silbert that a local detective "has what you saw, you witnessed a carjacking."

Moore took the truck onto Loop 101, heading north. The Gilbert officer, following orders, broke off pursuit. Silbert continued following the stolen truck on the highway, reporting updates on his cellphone.

Moore left the freeway near Desert Ridge in North Phoenix, ran a red light, and got back on the freeway. He headed west and turned north onto I-17. DPS was staging at various locations north. The helicopter had to break off, and communication with Silbert cut off.

No other DPS officer saw the stolen truck until it reached Table Mesa Road. To the north, officers deployed spike strips. One caught a front wheel of Moore’s truck. 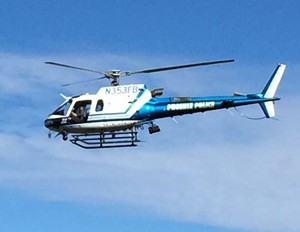 With no one taking command of the state DPS pursuit, a Phoenix PD helicopter unit began giving instructions to troopers on the ground.
New Times
Up until this point, DPS had not been in an official pursuit. Patrol officers were advised to stay back. After the spike strips were laid out near the Yavapai County line just north of New River, the incident became official. Different policies kicked in, giving patrol officers more discretion to end the chase.

Somewhere along the way, Moore called his dad, asked if he’d seen him on TV and told him patrol cars and a helicopter were chasing him.

A pursuing SWAT team sergeant told dispatchers that fog and snow were moving in and asked if he could conduct a PIT maneuver, in which the officer clips the suspect’s vehicle to force it to spin out.

Silbert authorized the action, but officers hesitated because they thought there was a passenger. They were worried Moore had a hostage whom they didn’t want to endanger. Besides, Moore had hit another spike strip and was driving on two deflated tires at 90 mph and officers didn’t feel clipping his car was safe above 30 mph.

The plan was to block the off-ramps and keep him isolated from the public on I-17. Then at milepost 282, just before Camp Verde, Moore flew off the road. He had traveled 110 miles, the last 40 with a DPS pursuit.

There never was anyone else in the stolen truck.

“PIT maneuvers at high speeds are extremely dangerous and may induce serious or deadly injury
to those involved,” the report found. “The PIT maneuver is not addressed in the Department's pursuit policy. Consideration for adding the PIT maneuver as an authorized intervention technique should be made.”

The report also recommended that policies restricting pursuits in different areas “be quashed and removed from circulation. The Department pursuit policy should be all-encompassing and the Department should only have one order, not to be superseded by any other. Removal of this section of policy recommended.”