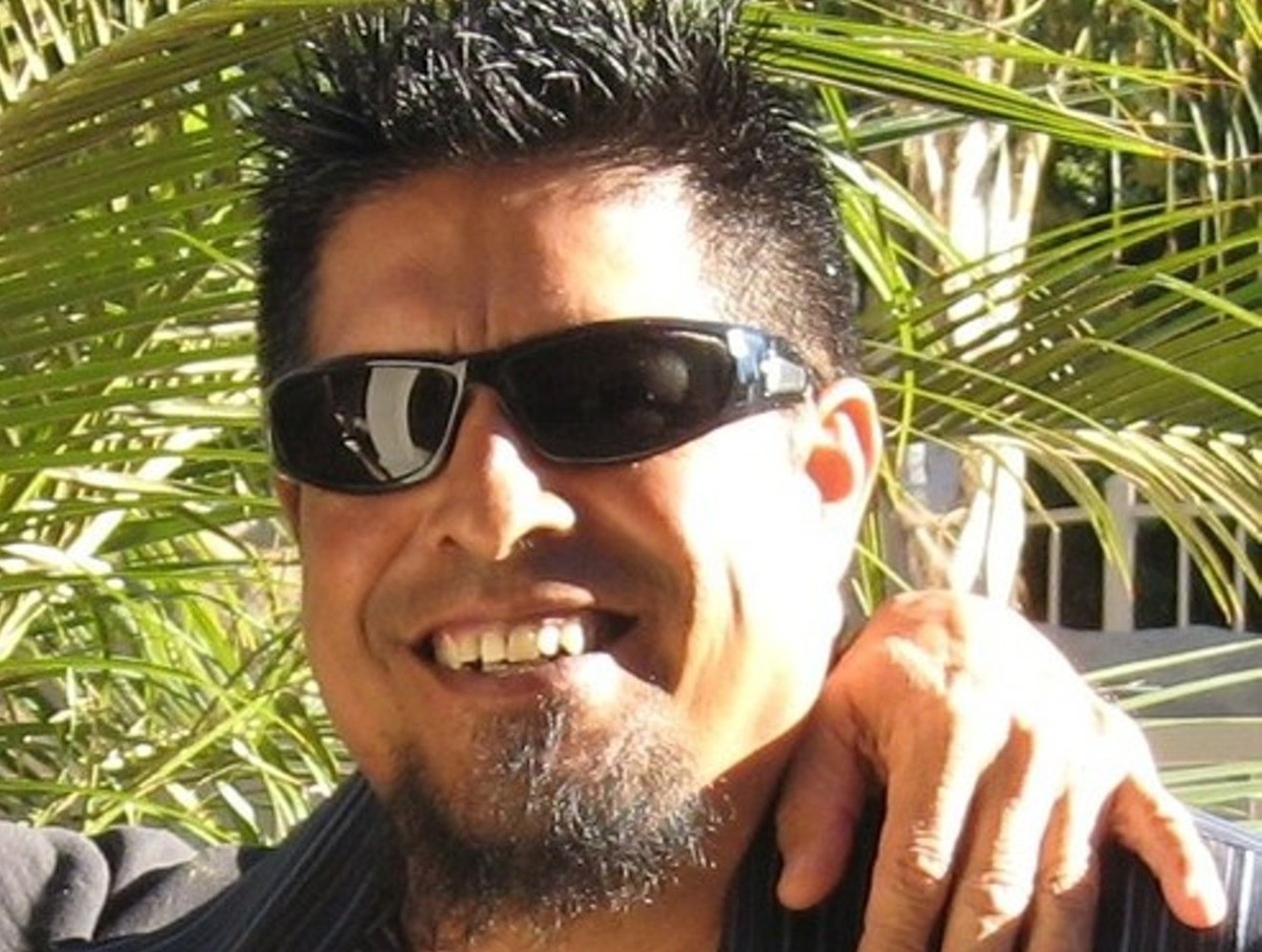 Courtesy of Mike Atencio
UPDATE: Phoenix has agreed to settle a lawsuit over the 2011 death of Army veteran Ernest "Marty" Atencio, who was arrested by Phoenix police and then died in the Maricopa County Jail run by former sheriff Joe Arpaio, the Associated Press reported. Arpaio is currently a candidate for the Republican nomination to the U.S. Senate. The county earlier agreed to pay $7 million to Atencio's survivors, according to the AP. Phoenix New Times has written more than a dozen stories about the case, including this one from January 5, 2017, indicating the there could be criminal charges in the case:


With all of the editorializing in the local and national press about ex-Maricopa County Sheriff Joe Arpaio's "legacy," it seems fitting that on his last full day as sheriff, the Ninth U.S. Circuit Court of Appeals issued a significant ruling in the brutal 2011 death of mentally ill U.S. Army Vet Ernest "Marty" Atencio, which occurred while the 44 year-old Phoenix man was a detainee at the MCSO's notorious Fourth Avenue Jail.

On December 30, one day before Democrat Paul Penzone succeeded Arpaio as sheriff — the result of Penzone's resounding defeat of the incumbent Republican in the 2016 general election — a three-judge panel of the appeals court rejected bids for "qualified immunity" by most of the law enforcement officers being sued by Atencio's family for using excessive force on him.

The panel found that one officer deserved qualified immunity from civil liability for excessive use of force, but the rest did not. These include two MCSO employees, detention officer Anthony Hatton and Sergeant Jason Weiers; and two officers with the Phoenix Police Department, Nicholas French and Patrick Hanlon. (Hatton and French are no longer employed by these agencies.)

Phoenix attorney Mike Manning, who represents Atencio's family in the claim, hailed the decision in an interview with New Times, saying the Ninth Circuit's order meant that the case would move toward trial, which he anticipates will take place this year. He explained that federal law provided police and detention officers with qualified immunity from civil liability for errors in judgment or mistakes they make in the course of their duties, unless it is a "gross mistake" that the officer should have known was unconstitutional.

"When you lose qualified immunity as an officer," Manning said, "you lose it because there are clearly defined standards that you are violating [regarding] the excessive force you are using with an arrestee or a detainee."

In fact, the Ninth Circuit panel decided that much of the evidence in the case — including video evidence — could lead a jury to conclude that excessive force had been used. That video — which went viral when the sheriff's office released it just before Christmas in 2011 — shows Atencio to be noncombative in MCSO custody right before several officers swarm him, forming what Manning refers to in pleadings as a "dog pile."

In its ruling, the appellate panel runs through some of the more egregious acts of the officers involved. For instance, the video shows French appearing to apply a potentially deadly chokehold on Atencio, though Atencio already had been subdued by several officers "and arguably posed no immediate threat." Also, while Atencio squirmed beneath the law-enforcement scrum, Hatton struck him repeatedly with a closed fist, the jurists note, and Weiers Tasered Atencio three times.

On his belly and spread out in a "Superman" pose, Atencio was handcuffed, then taken to an empty "safe cell." There, the ruling recounts, while several officers held him down and stripped off his clothing, Hatton "delivered a knee strike to Atencio's upper body, and possibly his head," though Atencio was handcuffed and prone. Officers then left Atencio, naked and motionless, alone in the cell. Several minutes later, a nurse noticed that Atencio was not breathing, and officers and medical personnel re-entered the cell to perform CPR.

Atencio was transported, brain-dead, to a local hospital, where he was kept alive on life support for a few days.

His family claims that Atencio was "murdered," and that the CPR and hospital trip were merely CYA moves on the part of the MCSO. The county medical examiner found no trace of illicit drugs in Atencio's system, ruling the cause of death to be cardiac arrest due to "acute psychosis" and "law enforcement subdual."

The dead man's family subsequently revealed that he was bipolar and had been off his meds when he encountered Phoenix police on the evening of December 15, 2011, at a local 7-Eleven. At the time, officers believed his erratic behavior and speech were caused by mental illness, according to police reports. He was not arrested, as he did not appear to be a threat to himself or others.

Later, the same Phoenix cops responded to call from a woman who complained that Atencio had kicked a door at an apartment building, and that he approached her, yelling at her and frightening her, but did not touch her. He then took off chasing cars, acting as if he were a dog. The officers arrested Atencio for assault, reporting that he did not resist. Police described him as being "easily distracted" and speaking of "random and odd things," which the officers found consistent with a person who had mental-health issues.

It was at the Fourth Avenue Jail, during the intake process, that Atencio encountered physical abuse and humiliation. According to court filings, detention officers reported that he seemed confused or lost. More than one officer observed Atencio talking to an empty peanut-butter container, as if it were a person. Medical personnel who evaluated him would later testify that he had been speaking in a "word salad." But though he was recognized as being "in crisis," they did nothing. If the county had an electronic medical records system in place, these health professionals would have seen that Atencio, who had been detained in the past, had a record of psychosis and delusional thoughts.


"I thought I'd seen so much in the Arpaio era that nothing could shock me." — attorney Mike Manning

While his mugshot was being taken, officers had their fun with Atencio, taunting him, according to one witness, and laughing at his inability to follow orders. The witness said detention officers got Atencio to make funny faces at the camera, in an attempt to make him "Mug Shot of the Week," a reference to an online MCSO contest in which the public voted for their favorite mugshot. One of Atencio, his face contorted into a weird smile, was widely distributed after his death.

When Atencio was jumped, officers were trying to get him to take off his shoes so they could be put through a scanning device. According to interviews and depositions of the principals, Atencio first took off one shoe, then asked Officer Hanlon to take the other off for him. In the video, Atencio stands back, arms crossed, which is when the dog pile commences. After Atencio is taken to the safe cell, officers can be seen in the hall outside, dancing, laughing, and joking — a bizarre display.

Manning tells New Times that this was one of the most egregious cases of alleged manslaughter that he has litigated during Arpaio's 24-year rein. And that's saying something, as Manning has successfully sued the county on several occasions on behalf of the families of loved ones who have died needlessly in the MCSO's custody, from the infamous restraint-chair death of Scott Norberg, settled for $8.25 million in 1999, to diabetic mom Deborah Braillard, who died because the MCSO denied her medication, resulting in a $3.25 million settlement in late 2012.

I am reminded of a time many years ago when I asked Arpaio if he felt any guilt about the parade of corpses that have emanated like an unbroken line from the vast incarceration complex he oversaw. I recall him shrugging and saying something to the effect of, "People die in the jails." Which is undoubtedly true.

However, in his 2015 order in the Atencio case that the Ninth Circuit mostly upheld on December 30, U.S. District Court Judge Paul Rosenblatt cited the testimony of an expert witness for the plaintiffs, who opined that Arpaio's infamous, mean-spirited rhetoric toward the MCSO's inmate population became reality in the hands of many of his employees.

Rosenblatt found that numerous public statements made by Arpaio were consistent with this opinion, such as the sheriff referring to his Tent City as a "concentration camp" and saying he wanted to "educate through punishment."

That culture of cruelty has cost Maricopa County scores of millions of dollars in legal costs. The thought of it annoys Manning no end when he reads nostalgic articles written by some in the media about Arpaio's sayonara from office. In light of Arpaio's departure from politics, how does Manning view the Atencio case and this recent ruling?

"As a grotesque bookend on a grotesque period in Maricopa County history," he replies. "The level of inhumanity involved in this case astonishes even me, and I thought I'd seen so much in the Arpaio era that nothing could shock me."

Read the Ninth Circuit's denial of qualified immunity claims in the Atencio case:

Ninth Circuit's Denial of Qualified Immunity Claims in the Atencio Case
KEEP PHOENIX NEW TIMES FREE... Since we started Phoenix New Times, it has been defined as the free, independent voice of Phoenix, and we'd like to keep it that way. With local media under siege, it's more important than ever for us to rally support behind funding our local journalism. You can help by participating in our "I Support" program, allowing us to keep offering readers access to our incisive coverage of local news, food and culture with no paywalls.
Make a one-time donation today for as little as $1.