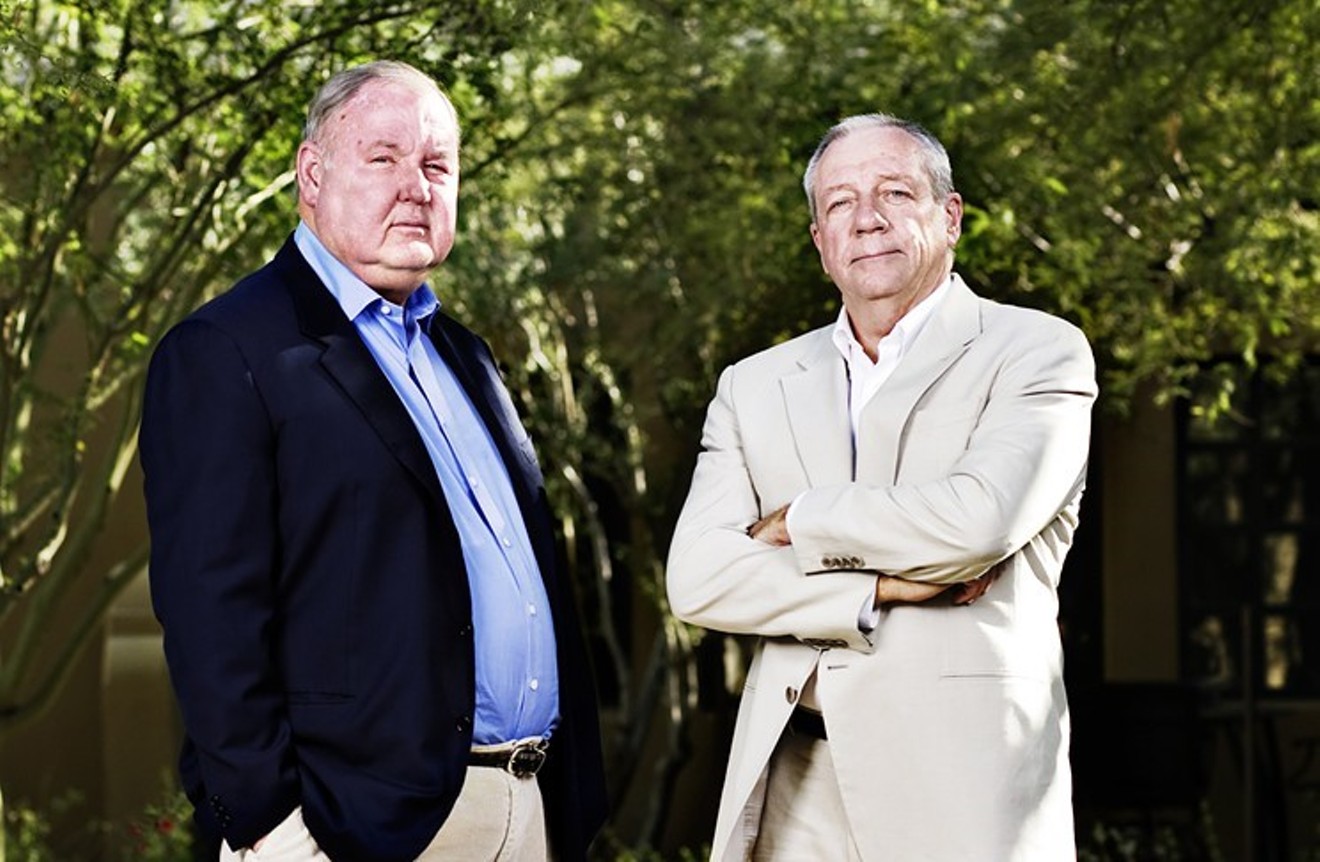 Lacey and Larkin are back in Sacramento for more legal brawling over Backpage. Giulio Sciorio

Update: A California judge gave Jim Larkin, Michael Lacey and Carl Ferrer a significant legal victory on August 23, 2017, throwing out all of the pimping and prostitution charges that state prosecutors had re-filed against the men. Sacramento Superior Court Judge Larry Brown’s ruling was the latest of several court decisions reaffirming the principle that federal communication statutes protect  publishers from content created by third parties, and was seen as an important victory by free-speech advocates and proponents of Internet freedom. However, Brown gave prosecutors a partial win by allowing the state to proceed with 25 counts of felony money laundering against the three. California Attorney General Xavier Becerra said in a written statement that he was now “a step closer…to exacting justice” against Ferrer, Larkin and Lacey. But defense attorneys told reporters outside the courtroom that they were confident those charges — which they have previously described as part of an extralegal vendetta against their clients — would be tossed out at a preliminary hearing scheduled for October 3.

Instead, the businessmen were treated to another heaping helping of hurry up and wait.

Sacramento County Superior Court Judge Curtis Fiorini continued the arraignment until February 9, when his colleague, Judge Lawrence Brown, will take up the matter and rule on a defense motion to dismiss and a prosecution response filed on Monday.

The judicial round-robin was due to the court being in the process of an annual reorganization, according to a spokeswoman for the court.

At least conditions were better than in October, the last time Lacey, Larkin, and Ferrer were arraigned in Sacramento on similar pimping charges, when, after several nights in stir, the trio appeared in orange jumpsuits, behind the bars of an in-court jail cell, as prosecutors fought against their release on bail.

Back then, Judge Michael Bowman shot down the prosecution on that effort, just as he ultimately dismissed all charges against the men on December 9. Not to be outdone, Harris refiled the charges in late December, tacking on 27 counts of money laundering to boot.

No wonder the defense's recent motion argues that the new charges are part of a "vindictive prosecution" by the California Attorney General's Office, one it claims is precluded by Bowman's previous dismissal in the case.

Harris, who has now moved onward and upward to D.C., filed the first set of pimping charges four months ago using the bizarre legal theory that Backpage execs — even former Backpage execs — can be held accountable for ads placed by others in the site's "adult" section, which allegedly lead to acts of prostitution.

Bowman rejected that logic at the time, ruling that Ferrer, Lacey, and Larkin are shielded from state criminal prosecution by Section 230 of the federal Communications Decency Act of 1996. That statute grants immunity to owners and operators of interactive websites for content posted by third parties.

In Section 230, Congress provided "a foreclosure from prosecution," Bowman wrote, concluding that Congress would have to change the law for the AG's office to proceed. Harris didn't see it that way, doubling down on the charges just two days before Christmas.

The motion to dismiss asserts that the AG's action is part of a "vendetta" against Backpage and a "patent violation" of Bowman's order.

"The court expressly rejected the state's reasoning and evidence," the motion reads, "but the AG refuses to respect Judge Bowman's ruling and now effectively seeks another round of 'duck bites' at defendants and the law."

Harris, now a U.S. Senator, at the January 10 Backpage hearing before the Permanent Subcommittee on Investigations.
Permanent Subcommittee on Investigations
The defense argues that there's nothing new about the charges, save for the money laundering allegations, though they draw on the same evidence offered previously and rely on the same theory of the case: i.e., that Lacey, Larkin, and Ferrer knowingly made money off ads soliciting prostitution.

In addition to dismissal, the defense motion requests that the new case number be assigned to Bowman, that any other legal actions by the AG's office be enjoined, and that all property and assets seized from Backpage be returned.

In its response, the AG's office claims that it is in its rights to file these new charges because they supposedly are based on "new evidence," and that in addition to pimping, "the people will also prove money laundering based on defendants' acts of fraud."

The rebuttal says that the AG's office is still analyzing evidence against Backpage obtained via search warrants and subpoenas — some relatively recent. It also suggests that some of the new evidence being sifted through comes from the recent probe of Backpage done by the U.S. Senate's Permanent Subcommittee on Investigations, which concluded that Backpage concealed evidence of criminality by systematically editing out troublesome words and phrases indicative of underage prostitution.

On January 10, Ferrer, Larkin, Lacey, Backpage's general counsel Liz McDougall, and its chief operating officer, Andrew Padilla, appeared before the Senate subcommittee and refused to answer lawmakers' questions based on the First Amendment right to freedom of speech and the Fifth Amendment right against self-incrimination.

(As part of its report, the subcommittee released internal company documents reputedly showing a seller-financed loan in 2014 from Lacey and Larkin to Ferrer of $600 million, with which Ferrer purchased the company. Lacey and Larkin say they no longer own Backpage and are not involved in its business decisions.)

The prosecution argues in its rebuttal that Section 230 is not a defense to money laundering, and asserts, broadly, that it "does not shield internet providers from state criminal liability."

But Professor Eric Goldman, an expert on Section 230 who teaches at Santa Clara University School of Law and writes a highly respected blog on internet law, disagrees.

"That's what they say," he tells New Times, referring to the prosecution's assertion on state criminal liability. "But that's not what the law says ... Their argument is novel, and doesn't have any precedential support."

Meaning that numerous cases ruled on by federal appellate courts have held that Section 230 does shield website operators both from civil liability and state criminal prosecution.

Section 230 of the CDA does not offer immunity from federal criminal law, however, and the AG's response argues that the since the federal government hypothetically could bring money laundering charges against Backpage without violating the CDA, the State of California is allowed to do the same.

Goldman also found this argument by the state AG to be "novel," and expressed doubt that it would hold. He observed that the AG spends portions of the rebuttal rehashing arguments it has made previously.

"That's where I can understand part of Backpage's frustration," he explains. "Because those arguments already failed, and they're trying them again in front of a different judge."

Note: Lacey and Larkin are the co-founders of Phoenix New Times and former owners of Village Voice Media (now Voice Media Group), which they sold in 2012 to company executives.

Read the Defense Motion to Dismiss the New Criminal Charges Against Backpage Honchos.

Read the California AG's Rebuttal to the Defense Motion to Dismiss.