A Shot of B-9 ... Beethoven's Ninth ... Just What Tito Muñoz Ordered for Final Four 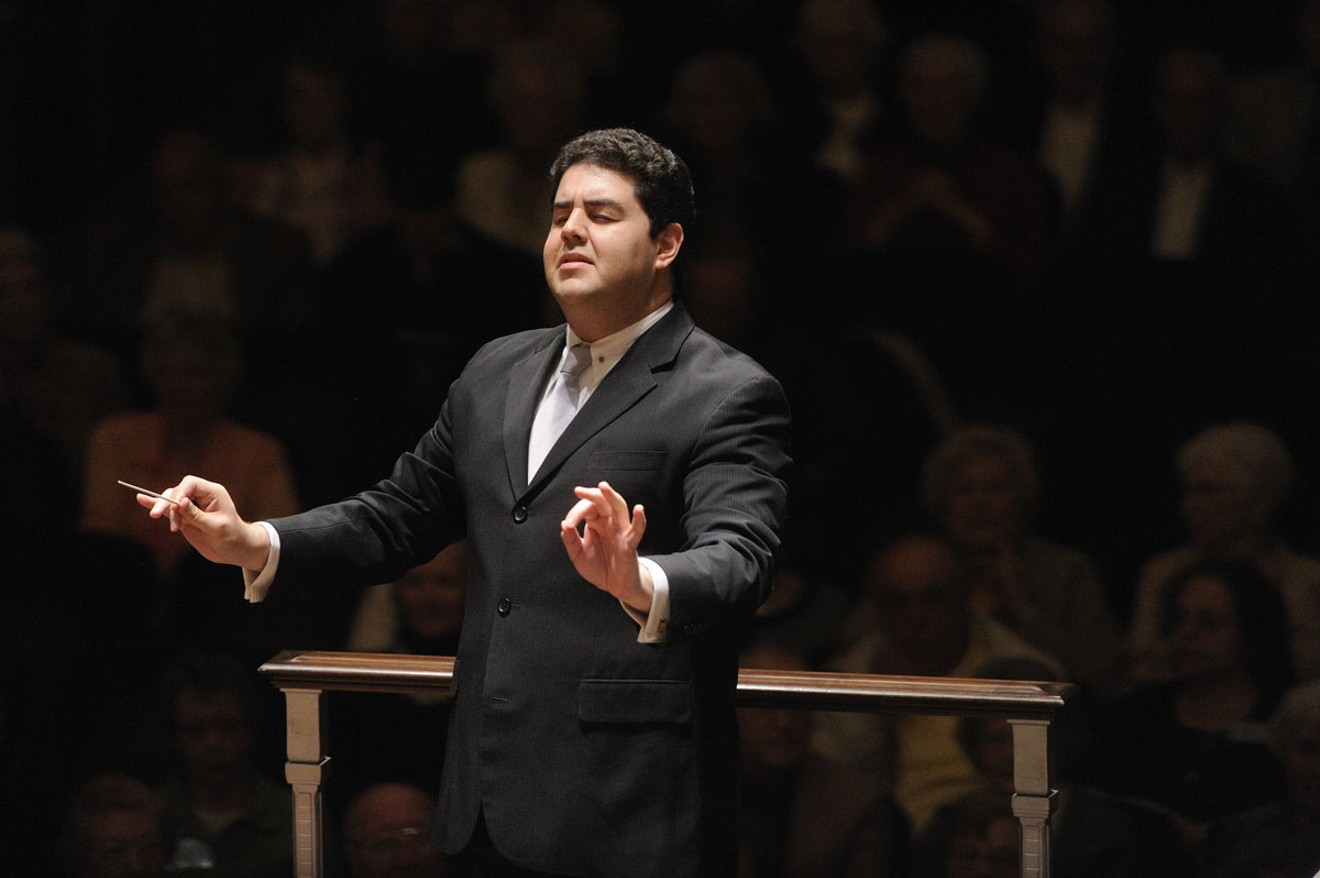 If you’re one of the thousands and thousands of people expected to ride the Valley Metro Light Rail on Sunday, look to your left or right, ahead or behind … you may be standing next to a rising superstar.

If you see him, you’ll know he’s not one of the elite athletes who will be playing basketball and baseball here this weekend. He looks a lot most of us — ordinary height, slightly pudgy. He’s 33, but he could pass for one of the college students who will be cheering for their teams at the NCAA’s Final Four basketball championship in Glendale.

“I live right by the light rail,” said Tito Muñoz, music director and conductor of the Phoenix Symphony, acknowledging the massive crowds that are expected to gather downtown. “Maybe I’ll ride it in. It might be easier.”

Usually, when Muñoz conducts a piece as popular as Beethoven’s Ninth Symphony, he has the downtown practically to himself. But not this weekend, especially Sunday, when the city will be as crowded as perhaps never before.

The Phoenix Symphony will perform B-9 twice: Saturday at 7:30 p.m, when most of the action will be elsewhere, then again on Sunday at 2 p.m. And that’s when all kinds of folks will be trucking downtown.

Count on at least 50,000 for the baseball opener, and at least that many more for the rest of the events.

The downtown driving and parking infrastructure will be saturated. The symphony is advising patrons to arrive at least an hour before Muñoz raises his baton. Then, there are the logistics of navigating the 120 symphony chorus members, the 75 orchestra players, four soloists, and the stagehands and rest of the crew through the milieu.

Tito Muñoz
Dario Acosta
Muñoz smiled a nervous smile as he thought about it.

But did the Phoenix Symphony deliberately schedule one of its most popular performances to cash in on Phoenix’s Final Four fervor?

“It was planned long before we realized the dates of the Final Four,” he said. “I have to admit that was not part of the equation.”

But Muñoz has something in common with some of the Final Four teenagers who will be playing in the National Basketball Association by next season – precocity.

The native of Queens, N.Y., was a guest conductor for the world-renowned Cleveland Orchestra in 2006, when he was only 23. That’s sort of like a hoops rookie going mano-a-mano with the CLE’s favorite son, Lebron James.

“Of course, it was intimidating,” he said. “Conducting an orchestra of that caliber would be intimidating for anyone … whether you’re young or old, it’s a challenge to lead such talented musicians. They say the better the orchestra, the harder it is to conduct.”

But he clearly held his own. Less than a year later, he was hired as an assistant conductor in Cleveland, where he also developed an ongoing relationship with the Joffrey Ballet, earning continued good reviews.

"Picking up a glorious but defunct tradition, the Cleveland Orchestra reopened the pit at Blossom Music Center to accompany the Chicago-based troupe," Plain Dealer critic Zachary Lewis wrote about the return of the Joffrey Ballet to the Cleveland area in 2009. "Assistant conductor Tito Muñoz presided over a rich, diverse program of works ... More than a flashback to the good old days, the sold-out event served as a reminder that the orchestra needs to keep a toe in the world of dance."

Muñoz went on to lead French orchestras in Lorraine and Nancy before he was hired as music director of the Phoenix Symphony in February of 2014 at age 30. He opened his second season here with Beethoven’s Ninth. He said he has no qualms about conducting it again so soon. It doesn’t get old.

“I remember something (former Cleveland conductor) George Szell said to the orchestra when they were preparing to play a familiar piece … ‘Let’s not put the house sauce on the performance. Let’s give it something extra.’”

Saturday’s and Sunday’s performances will also include three selections from another composting composer, Richard Wagner.

That’s something of a departure for Muñoz, who frequently takes his growing Phoenix audience into uncharted territory at least once during a program.

That’s what he did when he opened this season in September with a piece by young American composer Nina Young called “Remnants,” which invited the audience “to perceive the orchestra as one giant instrument – a resonating body.” The he returned to the well-plowed ground of Rachmaninoff and Beethoven’s Fifth.

“I’ve tried to cultivate a relationship with the audience, little by little, taking risks,” he said. “It’s a matter of building trust. I believe in encouraging a dialogue … and it’s okay not to like it.”

There is little risk with Beethoven’s Ninth. Novices at least recognize the powerful chorus, “Ode to Joy.” Serious listeners have heard it played time and again by “their favorite dead German conductor,” Munoz said.

But the symphony has long held powerful, but conflicting political overtones. Beethoven, experts say, was inspired to write it by the French Revolution. The European Union adopted is its anthem but so did Rhodesia. It was Hitler’s favorite, but it was also played at the destruction of the Berlin Wall and in Tiananmen Square.

Munoz sees the masterpiece as “an ode to brotherhood … as a way to build community.”

However, don’t try to read something into his selection of Beethoven’s Ninth at this particularly unstable point in history.

“I’m not going to make a political statement,” he said. “The message is always something that is going to be valid.”